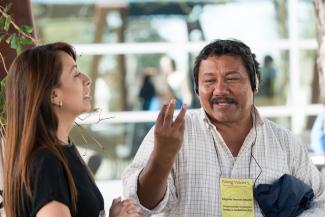 The following are excerpts from presentations and interviews conducted at the Rising Voices conference.

We are nine Indigenous and Afro-Honduran peoples. Each community has their own reality based on their territory in the region where they live according to the resources they have. That means that a national strategy for climate change without respecting the particular issues of each pueblo is not going to work. We have to distinguish on the basis of regions, on the basis of climates, on the basis of the people, on the basis of traditions, and a distinct focus has to be applied on each area. We are doing this right now, documenting what each pueblo has.
The dialogue between pueblos is serving quite well to understand what is happening. On the Patuca River, immediately the most complex issue is the drought. I know because the only means of mobility is the river, which has been our highway, our path. The Patuca River for us is the pillar of the Tawahka peoples’ cosmovision. So for the adults to see that river dry is very, very serious. But apart from this, it limits us and our business and our mobility, because in the summer it gets too dry and in winter it rises too much. They’re two extremes that didn’t exist before because there always was a balancing point. Now we don’t know how much it will grow in winter. That means that the fields people cultivate in the lower areas can’t be cultivated any longer because a winter could come that would take the entire harvest away. Production is not the same when farming in the mountains or in meadows. Apart from that, there are other impacts on farming beans, corn, and rice fields. [There are] new plagues that eat the side of the beans. So the people somehow feel forced to use chemicals to spray because you can’t be killing plague after plague.
All of that brings consequences for the economy; as well the use of chemicals logically goes into the food and people are not used to it. That’s why in the past 10 years we have seen a surge of illnesses that didn’t exist before. Apart from the fact that food is declining, apart from having food of bad quality because now it has chemicals in it, there is the fact that people don’t have enough resources to go to specialized hospitals.
Now [we are] returning to use some fruits that we used to have in the olden days. We used the masika, which is a tree that gives fruit and then you take out the fruit and make it into tortilla. But then corn was brought in, beans . . . people came and the masika was forgotten. Then we went with our crops. Now we return again to recover the old, because they are big trees that are not affected by the plagues as are beans.
Another is the biri biri system, which is the traditional system of mutual labor, you help me I help you. The biri biri is like a grid so we can see when the one who has money can do more. [In] the last 25 years, the more educated people have become, the more they forget about the collective reality and become more individualistic. So helping is like this, the one who knows how to do this helps the other, and the other helps another.