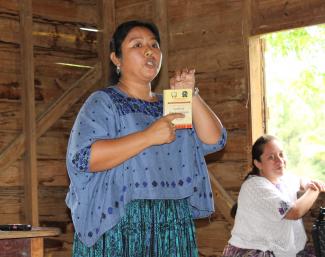 On a recent January evening, Matilde Chocooj Coc stood talking to the mayor and town council members of Crique Sarco, a Q’eqchi Maya community of about 400 people in southern Belize whose territory is being explored for possible oil reserves by Texas-based drilling company US Capital Energy. Chocooj Coc comes from El Estor, a Q’eqchi Maya community in northeastern Guatemala with years of experience with similar development projects, especially mining and oil palm plantations. She told them, “I am not here to convince you of anything, but simply to share the experiences of my community so that your communities in Belize can be better informed about what could happen as a result of development. What you decide to do with the information is up to you.”

Crique Sarco is a two-hour walk north of the Sarstoon River that forms the border between Belize and Guatemala, but to get there, Choccoj Coc had traveled five hours by bus, then two hours by boat, another two hours in a van, and finally a 20-minute slog up a muddy path across a wooden footbridge over the Tamash River. She came as part of a small delegation; her co-worker, Karina Azucena Garcia, represented the Defensoria Q’eqchi, a Maya organization in El Estor. The two women, along with El Estor residents Walter Roberto Can Cuc and Paula Pop Quib, came to discuss strategies that Q’eqchi Maya communities have been using in Guatemala to exercise their right to Free, Prior and Informed Consent. They explained how their communities have been trying to claim their rights via the rules for community consultation as described in the International Labor Organization Convention 169 (ILO 169) and the United Nations Declaration on the Rights of Indigenous Peoples.

Traveling with them were two Maya radio producers, Aurelio Sho from Radio Ak’kutan in Blue Creek, Belize, and Rosy Gonzalez from Radio Ixchel in Sumpango, Guatemala, who were documenting the exchange and use the material as part of a Cultural Survival radio series to inform Indigenous audiences about their right to Free, Prior and Informed Consent. The series will be broadcast later this year on radio stations in Indigenous communities around the world. The exchange was organized by Cultural Survival as part of our Free, Prior and Informed Consent Initiative and co-facilitated by Gregory Ch’oc, director of the Sarstoon-Temash Institute for Indigenous Management.

The meeting took place primarily in Q’eqchi with English and Spanish mixed in for the benefit of some of the visitors (Xunic and Gonzalez speak Kaqchikel, which is not mutually intelligible with Q’eqchi). The purpose of the exchange was to help ensure that community leaders in Crique Sarco, and nearby villages of Midway and Conejo, had the opportunity to hear an instructive example from neighboring communities in Guatemala. Ch’oc explains, “[US Capital] held a community meeting that was meant to be a ‘consultation,’ but it was really just the company telling the community what was going to happen from the perspective of the company. Essentially the company says, ‘there will be lots of benefits and no risks.’”

According to Ch’oc and Sho, US Capital first tried to convince the leaders and most educated members of each community to back oil exploration by offering them paid jobs; Can Cuc affirmed that the same tactic was used in Guatemala. “They get the people to accept the development with promises, but later, the promises are not fulfilled,” he says. Sometimes the information is misleading in other ways. Behind the school building where the meeting was held in Crique Sarco, a new two-story concrete school building has been constructed.

On the side of the building is painted “US Capital, Energy Belize, Energy that becomes life,” giving the impression that the building was constructed with funds from the oil company. But in fact, according to Ch’oc, the building was built by the European Union, and “the next year, US Capital came and painted it and added their name.” Pictures of similar schools bearing the US Capital name have been shown to other communities, implying that such benefits will come with development.

The following morning the delegation met with the leaders of the village of Midway, an hour’s drive from Crique Sarco. The leaders of both communities had a general understanding that the government and the oil company should talk to the communities before moving forward with plans for development, but neither community understood the rules established in ILO 169 and the Declaration. “They really need a better understanding of their rights under international law when they are talking to representatives of the company,” Chocooj Coc says.

Later that afternoon, in the 188-person village of Conejo, the delegation’s reception was chilly despite the hot afternoon sun. The newly elected alcalde (mayor) is pro-oil, and had invited an agent of the oil company to the meeting who argued that oil drilling won’t present any health threats to residents. “The new mayor has accepted a job with the oil company,” Ch’oc quipped. After her presentation, which was followed by a heated exchange with the mayor and the agent, Chocooj Coc says, “These community leaders have already been convinced by the company. Let’s hope that the people understand what they are getting into.” Four members of the Belize Parliament also arrived in Conejo as the delegation was leaving. The Belize government will receive 5 percent of the oil revenues. Ch’oc suggested to them that they ask the company for 25 percent instead of 5 percent and let the communities decide how to use most of the money. In Guatemala the company will pay only 1 percent.

The community of Sunday Wood has already signed an agreement to allow exploration, while other communities, including Crique Sarco, Midway, and, before the new mayor was elected, Conejo, have signed resolutions to continue to negotiate and/or fight the exploration. Ultimately, the decision of whether or not to allow oil drilling or any other development project needs to be made by the community. The principles are outlined in ILO 169, the Declaration, and other agreements, but in practice, the decisions are often not free and the communities, as opposed to just community leaders, are not informed. In cases when they are informed, the information is not complete, truthful, nor is it delivered prior to the beginning of the development. Community-to-community exchanges can contribute to raising awareness and increasing understanding of the right the Free, Prior and Informed Consent, and the Cultural Survival radio series will help to
reach additional communities.

Representatives from US Capital and the Cultural Survival delegation were staying in the same hotel in Punta Gorda. Kiera, an employee at the hotel, says, “The oil people have been coming here for the past three years. I don’t think [drilling and oil production] will happen in the end. It is too much arguing for too long and it won’t be worth the headache for the company. They come for months at a time and spend a lot of money and then they go away. I think that soon they will give up and not come back.”

Free, Prior and Informed Consent (FPIC)
FPIC is the principle that a community has the right to give its consent to proposed projects that may affect their lands and communities. This principle is protected by international human rights law as “all peoples have the right to self-determination” and “all peoples have the right to freely pursue their economic, social and cultural development.” It is enshrined in the ILO 169 (which only 22 countries have ratified to date) and the UN Declaration on the Rights of Indigenous Peoples (Article 32), which states:
1. Indigenous Peoples have the right to determine and develop priorities and strategies for the development or use of their lands or territories and other resources.
2. States shall consult and cooperate in good faith with the Indigenous Peoples concerned through their own representative institutions in order to obtain their free and informed consent prior to
the approval of any project affecting their lands or territories and other resources, particularly in connection with the development, utilization or exploitation of mineral, water or other resources.
3. States shall provide effective mechanisms for just and fair redress for any such activities, and appropriate measures shall be taken to mitigate adverse environmental, economic, social, cultural
or spiritual impact.

This exchange and the international radio series about Free, Prior and Informed Consent was made possible with funding from the Christensen Fund.