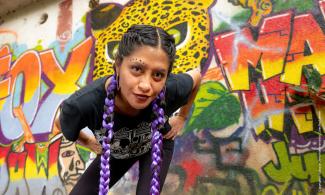 Artist, merchant, adventurer: that’s how Cat Monzón (Maya K’iche’) defines herself. Since 2019, she has been part of the Cultural Survival team as an Executive Assistant. Monzón has dabbled in photography, film, music, and also in entrepreneurship. Recently, she began to explore the performing arts of acting, and dance. She appreciates the forms of expression that allow one to make emotions, visions, and ideas known.

Monzón was born in a community in Totonicapán, Guatemala, where women still wear traditional clothing but most do not speak their ancestral language and now practice Christian religious beliefs. She recalls that her mother was forbidden to teach her the K’iche’ language, although she has memories of it being spoken to her in her early childhood. Growing up, she studied at an international school in Guatemala because her parents wanted to give her the best education possible. “Over the years, I realized that this establishment was highly racist, classist, and violent, with the kind of silent psychological violence that some American missionaries contrive,” she says.

Monzón now lives in the Atitlán basin in the department of Sololá, where climate, fauna, and culture come together in an impressive way, but where there is also a lot of poverty and violence against the Maya population. There is dispossession, neocolonialism, and gentrification; there is resistance, corruption, and assimilation. Monzón explains, “The violence with which they indoctrinated grandmothers and grandfathers is one of the reasons why Maya people live in a Western way and practice Christian religions.”

Monzón’s Indigenous pride led her to join Cultural Survival, motivated by working for Indigenous Peoples around the world alongside a majority Indigenous team. “My work gives me great satisfaction. Although there are tools and organizations that Cultural Survival works with and that are Western or white (such as the United Nations or the Declaration on the Rights of Indigenous Peoples), it is necessary to know them and use them to defend peoples and communities.” However, she says, “I think that these tools do not validate or give life to the rights and forms of governance of Indigenous Peoples; they only name and endorse them, since Indigenous Peoples will always have self-determination and autonomy of their lives and territories.”

One of Monzón’s concerns about the future of Indigenous Peoples is the role that technology is playing in their territories. “Technological advances are causing misery, poverty, and dispossession for those who do not have access, so they cannot benefit from it. Likewise, there is a disconnect between urban Indigenous people and those who live in rural areas. We need to be more united and get to know each other. I recognize that I need to take more steps, since I only partly speak my mother tongue and intersperse my Mayan clothing with Western clothing or other cultures of the world.”

Despite the recognition of this westernization, Monzón has always been clear that she is Indigenous Maya. “Unlike other mestizo people, I [do not] consider myself to have cultural identity problems, because my parents always valued our culture and origins. I want to pass on that sense of identity to future generations. I also want to inherit the value of sharing and being in solidarity with the community, knowing that the Maya people have each other as a great family,” she says.

As a musical artist, Monzón’s inspiration comes from many sources. “My music is sometimes inspired by emotional states. I write when I feel grateful or angry. My music addresses both philosophical and mystical issues as well as more political issues,” she says, naming her influences as Guatemalan rap and hip hop artists such as the Bacteria Soundsystem Crew, Las Musas, Gabriela Bolten, and Rebeca Lane. She is also influenced by Cuban rap artists such as Danay Suarez, Los Aldeanos, Randy Acosta, and Los Orishas, as well as rappers from Spain, such as Violadores del Verso, Rapsusklei, and Morodo.

Outside the world of music, Monzón’s mother has been one of her greatest inspirations and is her ideal example of an independent woman: very strong and deeply rooted and proud of her Maya identity. Likewise, Thelma Cabrera, an Indigenous campesino woman who ran for president of Guatemala in 2019, inspired her to write a song, “Piel de Reina,” about the struggle of many Indigenous women leaders and women in her family.

Monzón collaborated with Gabriela Bolten, a musician who belongs to a younger generation of rappers in Guatemala. Although she has not performed live recently due to the pandemic, Monzón considers herself an introspective digital artist. “I like to write and make music and rather enjoy uploading my music to Soundcloud so that people can listen to it online and broadcast it. It is important to me to wear my Mayan clothing when I rap, so that Indigenous Peoples see that there are Maya women who do things and we can break stereotypes. I want to continue to rap, and in the future would like to record an album, continue taking photographs, and practice dance, circus, theater and all those disciplines that involve the body and its movement.”