Respecting the Sea: A Conversation with Elizabeth James-Perry 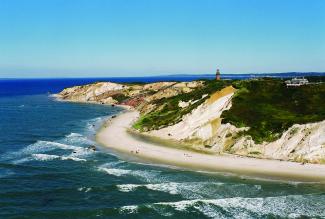 For at least 25,000 years, the ancestors of Wampanoag people have lived at Aquinnah (Gay Head) on the island of Noepe (Martha’s Vineyard, MA), pursuing a traditional economy based on fishing, horticulture, and wild harvest. In the Aquinnah Wampanoag Island origin story, benevolent giant beings, Moshup and his wife Squant, created Noepe and the neighboring islands and hunted whales for people’s sustenance. They are believed to continue presiding over their destinies.

Europeans reached Noepe 400 years ago. Gradually, English settlements on the island impacted the Indigenous ocean-going communities through land dealings, religious persecution, debt-servitude and disease. In the 1800s there were three Native communities on Martha’s Vineyard: Aquinnah, Christiantown/ Manitootawun, and Chappaquiddick. Aquinnah was the most populous and organized, and able to keep some control over their land in part due to revenues from global seafaring trades, cranberry harvests, clay sales, and tourism. In the past century, more Native land has been lost as Tribal members have faced economic pressure to sell their land and leave the island altogether, returning to their homeland as time and finances allow. The Aquinnah Wampanoag Tribe worked toward federal recognition in the 1970s and ’80s, finally receiving it in 1987. The Tribe continues the fight to protect their rights as a sovereign Nation. Today, they operate a shellfish hatchery cultivating oysters, among other ventures.

CS spoke with Elizabeth James-Perry, an enrolled Aquinnah Wampanoag Tribe member, about the issues her coastal community faces. James-Perry holds a degree in marine biology and is the federal Tribal co-lead of the Northeast Regional Ocean Planning Body. She is also an artist and writer, focusing on traditional Wampanoag lifeways and contemporary culture.

CS: What does the ocean mean to your community?

Elizabeth James-Perry: As Aquinnah Wampanoag people, our most important ancient stories address glaciation and the subsequent losses and trauma due to melts and periods of rapid sea level rise, so there’s a record of past events in this region we routinely remember to remember. Ceremony reinforces these connections. Our culture teaches us to have a healthy respect for the sea, and we have long made our homes by it and upon it, enjoying the food, mineral and plant resources, harpooning, net and hook fishing, clamming, swimming, diving, and traveling comfortably by dugout canoes to many of the places we needed or wanted to go. It’s interesting to think of traveling by boat for thousands of years over places that were once thriving Native communities and centers of commerce. This way of life went on uninterrupted for a long time.

During and after colonization, Tribes continued to maintain themselves with seafood and building materials like huge driftwood. Tribal people for centuries have worked as respected sea captains, traders, whalers, and in the U.S. Navy. Our ways became incorporated into the local economy, with fish, sturgeon oil and whale oil, and wampum being accepted as currency. Beach rights, whale rights, and beach access routes were protected by our ancestors, who knew their importance. People continued to identify with ocean clans with surnames like Sturgeon and Seahorse to acknowledge our belief in merpeople. Ocean and fishing-related words abound in Wampanoag, and some were incorporated into the English language whole or in truncated form: words like squid, chum, tautog, that most New Englanders don’t even pause to wonder about the origins of—or acknowledge the sheer amount of side-by-side work it takes to trade languages that way; the same with knowledge of currents and navigation, or recipes like the clambake, New England clam chowder and cornbread, or codfish and beans.

CS: What are the threats facing the ocean and the people that rely on it in your area?

EJP: Commercial overfishing has already caused extinctions to happen within the last 400 years or so, and greatly reduced salmon, sturgeon, and herring, which are important for seasonal Tribal sustenance. Fishing practices have impacted eelgrass and other areas that function to support the various stages of marine life, from egg, to larval, to juvenile and adult. Increasingly acidic ocean waters that will be inhospitable to life is a serious concern. Sea level rise, warming waters, and major storms also have impacted the island of Martha’s Vineyard, Nomans, the nearby smaller Elizabeth Islands, Nantucket, and Wampanoag territories overall. Erosion is happening, and whilst that occurs, pollution-soaked sediments from developed areas wash right into the ocean. Some locations, including Nomans, were used as target sites leaving unexploded ordinances as a dump site for hazardous and possibly radioactive chemicals. These are things that Tribal members worry about.

And we have encountered other threats, like oil spills, that are detrimental to many forms of sea creatures of cultural significance. Many Tribal members depend on the ocean for their livelihood as fishermen and women. And as a community, we have long relied on seaweed, pelagic and deep sea fish, crustaceans, echinoderms, and various species of clams for food. Included in that list were once-abundant whales, sharks, birds, turtles, and sometimes seals. Distribution shifts of species away from Aquinnah is also occurring as warm water-intolerant species like winter flounder, cod, and lobster move gradually north. Detrimental impacts to our precious marine mammals with very specific limits for tolerances of sound vibrations, acidification, and specific areas to gather, feed, and travel in are occurring as more and more of the Outer Continental Shelf gets developed for wind turbines. It is not clear how they affect sharks, but it occurs to me to wonder who all that energy is going to be for if there is very little nutritious food for humans to be had from either the ocean or freshwater, or the land as soil quality goes down.

There is a terrible irony there, but our traditional culture keeps us from growing bitter and cynical. We remember abundance and are grateful to Mother Earth for all she continues to provide for us, past, present, and hopefully future. Aquinnah people have had to adapt and change over countless thousands of years. We do not take things for granted and know that careful work on all fronts, to gather information, clean up our messes, and respect ocean life and processes, has to happen for life as we know it to continue.

CS: What are some local solutions that the Tribe is working on?

EJP: Habitat restoration by planting eelgrass in Tribal waterways, water quality monitoring, dune stabilization, removal of invasive species, annual cleanups, fish species studies with underwater cameras in the herring run and winter flounder restocking, shellfish monitoring, and education are just a few of the projects that the Aquinnah Natural Resources Department have undertaken over the years. As a federal Tribe we have a government-to-government relationship with the federal government and have the right and responsibility to consult on various projects that occur in our ancestral homelands and waterways, including development and sand mining from near shore out to the Outer2 Continental Shelf. It provides a way for us to ask questions, express our concerns and perspectives, and consider ways to protect the ocean and the life within it for future generations of Wampanoag people to enjoy.

CS: How can Indigenous knowledge be an asset to Western science in creating change and protecting the planet?

EJP: Indigenous knowledge can be characterized differently from Western science. It has to do with careful, respectful observation and cooperation with natural systems for a sustainable future. Yes, there are Native economies, but somehow those systems of trade are not allowed to dominate every single other concern. Greed is not a celebrated trait in the Native community. It is a conscious choice to steer away from risky, wasteful attitudes towards nature.

CS: What are the next steps in addressing climate change and protecting the ocean, and what is the role of Indigenous Peoples?

EJP: It is important to have respect and equality and find ways to support our continuance as a unique culture on Martha’s Vineyard on a healthy Atlantic Ocean. Inclusion of Tribal leaders, culture bearers, and environmental specialists is key. Meaningful consultation is essential—Tribes have limited numbers of members, funds, and resources. The town and state are currently suing my Tribe to fight any kind of economic development that allows us to be self-sufficient, truly care for each other and our homelands. It is an example of a non-reciprocal relationship—we share information, but in truth, may gain next to nothing. Yet, we continue to share. The hope is that in the future, people will have gone through some material change to embrace different, more careful ways of doing things, and consider reciprocal relationships with federal Tribes. We are always going to be the First People, but relatively few non-Natives have taken time to understand what that is, let alone learn to respect it; to work with, and not against, their Tribal neighbors to protect the planet.

ALL PHOTOS BY ELIZABETH JAMES-PERRY.