Requiem, Repression, or Recovery for the South Siberian Border Peoples? 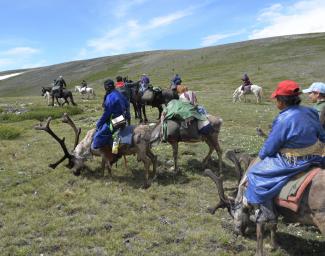 Eastern Siberia and its world famous Lake Baikal region, which is roughly the size of France, represents not only a cross-border zone between nations, but an ecological transition zone where the high, cold, grassland steppe country of Mongolia is interspersed with the southern range of taiga of Eastern Siberia, Russia. For thousands of years, long before the Russian state and its domination of Siberia and the reach of the Mongolian
Khans (Ghengis Khan’s heirs), mountain-based, nomadic hunter gathering, Turkic speaking tribes interacted and traded with nomadic Mongolian peoples from areas surrounding Lake Khovsgol and Lake Baikal. There was no perception of “border” among the highland and lowland tribal nomads that saw the Alpine highlands, steppe-forest, and steppe lands as homelands providing seasonal movement for their varying
livestock, hunting and gathering needs, and family relations.

In the high mountains of the Sayan Range, the native Turkic speaking peoples, including the Todja-Tuvans, the Tofalar, the Soyot, and the Dukha Peoples, benefited from their ancestors domesticating native reindeer some 3,000 years ago. Reindeer allowed people to live nomadically within the harshest of highland zones by providing transportation and carrying urtz-teepees and belongings, as well as providing daily milk that became central to their diet, and access to hunting wild game and foraging for wild edibles. (Yaks, now ubiquitous in Mongolia, are more recent mammal immigrants to the region.) Still starkly misunderstood by government officials today on both sides of the border, reindeer herding nomads of the High Sayans are hunter-gatherers, not livestock herders. This misperception has led repeatedly to repression and misapplied policies. North and east of Lake Baikal, Russia, and well into the Far East, Evenk hunter-gatherers have also faced serious repression from being misunderstood for who they are and their relationship with reindeer and their traditional lands. 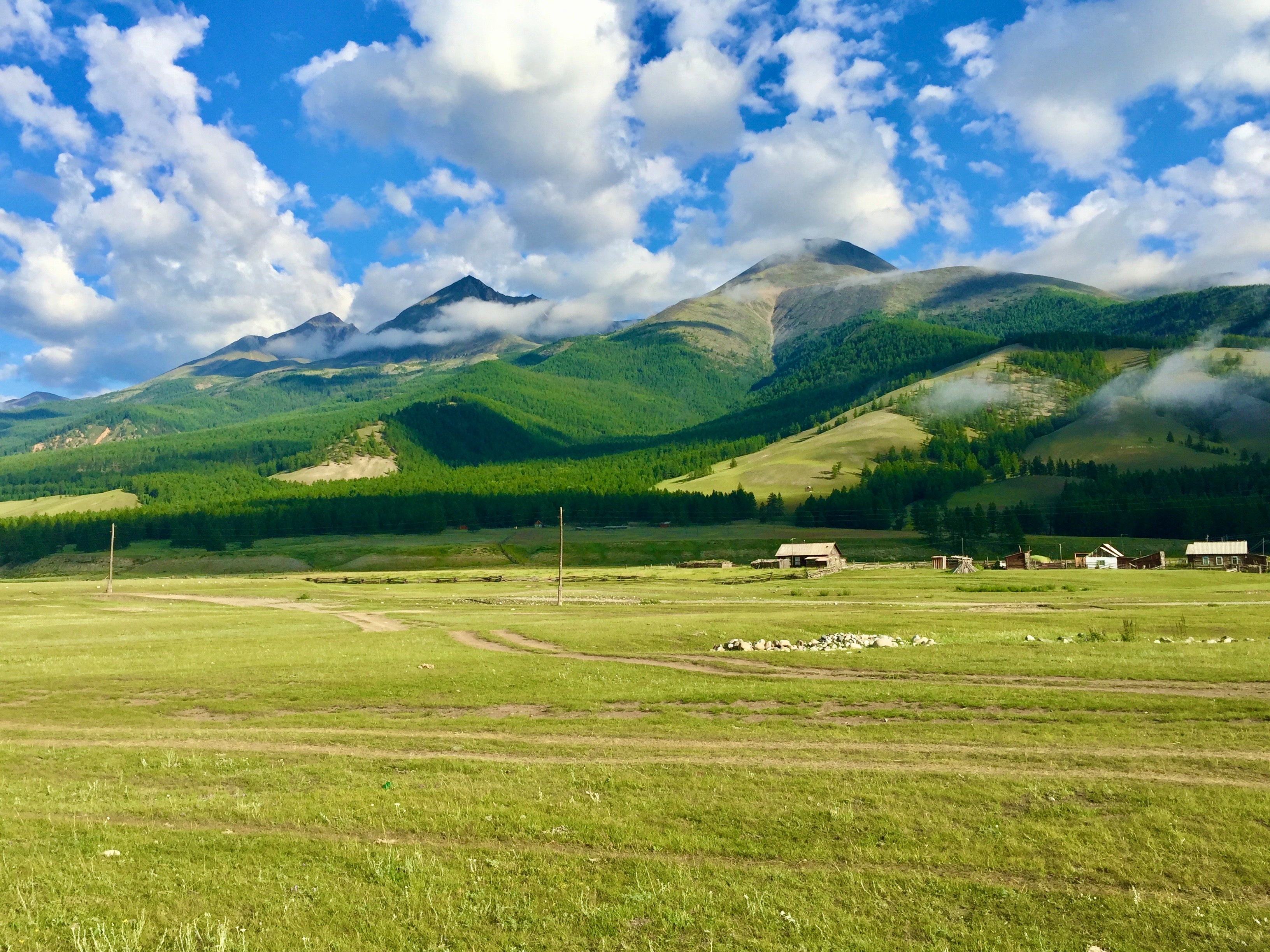 Since the collapse of the Soviet Union, the transitioning economic and political times have provided opportunities for Indigenous Peoples and ethnic minorities of the cross-border region to explore their identities and histories and consider transformative changes. The 1990s brought democratic reforms, private enterprise, and the opening of once completely closed border zones to international tourism along with international aid programs from several countries. Regional and local governments and access to media of all forms, the arts, and education opportunities presented new means for the appreciation and recognition of the histories and cultures of nomadic peoples. However, the last two decades have seen far too many setbacks across Siberia and the far east of Russia and Mongolia. Progress on Indigenous rights began to be checked by governments and new, corporate-backed exploitation of regional resources. Harmful repression of the freedoms previously enjoyed by representative NGOs aiding environmental, cultural, and Indigenous rights goals has been coupled with increasing impacts of uncontrolled tourism, excessive agriculture and hunting, lack of access to education and health care, lack of clear policy and practice towards land ownership and reform, and much, much more. Access to health care for nomadic and semi-nomadic herders and hunter-gatherers has always been a challenge, but more needs to be done so that the right mixture of integrated traditional and modern healthcare can be delivered with mobility across the wide and high expanses of remote rural and often mountainous regions.

The repression of Indigenous organizations has been used toward unbridled exploitation of natural resources, namely oil and gas, against the interests and among the Indigenous Peoples in the region. In 2002, federal policemen in unmarked clothing and masks attacked a number of Evenk leaders, beat them, and imprisoned them because they were part of a collective farm entity that was legally harvesting nephrite, a jade-like stone, on tribal lands for income in the face of corporate Russian interests. Government decrees and corporate licensing agreements have been sanctioned in Moscow to appropriate natural resources in remote, rural areas with little or no Free, Prior and Informed Consent of Indigenous communities. One of the most recent concerns on the Russian side of the border is the December 2019 decision by a Moscow Court to disband the Russian Association of Small Numbered Peoples of the North (RAIPON), which sought over decades to represent Indigenous Peoples regionally and nationally before the Russian Federation government. In the South Siberian region, this includes representation for the interest and human rights for the Tofalar, the Soyot, and nearly 50 other peoples across Russia, Siberia, and the Far East.

Mongolian officials recently established the Tengis Shisheg Gol Protected Territory with little informed consent of the Native Dukha (or Tsaatan) reindeer herders. The territory surrounds the Dukha’s ancestral lands and all wild game hunting, bird taking, and fishing—their primary subsistence diet and cultural heritage—is banned there. Mongolian government officials have arrested Dukha herders for practicing traditional hunting or picking up naturally discarded antlers of deer and moose, requiring the nomads to be taken far away and live apart from their families in the taiga for numerous months on end. Often the herders’ rifles are confiscated as well, impairing their ability to hunt and feed their families. Fines and forced exile such as this severely harm families, but also the whole community of herders where collaboration among families is required to carry on life in the harsh high taiga conditions. “We have lived and moved across these remote, wild lands for centuries with reindeer alone and independently. Our culture has old ways that teach us how to protect our wild animals and when we can and cannot hunt in order to safeguard their numbers. We are the longest ‘protectors’ of the wild animals here and the government of Mongolia’s prohibition banning our hunting traditions denies that and denies our true culture as Dukha and as responsible hunters of the old ways,” said a Dukha herder and hunter in his 60s who did not wish to use his name for fear of reprisals by protected area “guards” and officials. Dukha children learn to work with the highly domesticated reindeer from an early age.

Over the past year, the impacts of climate change and increases in forest fires across Siberia have had negative impacts on Indigenous communities, their resources, and livestock. Unchecked forest fires destroy the natural wealth upon which they rely on for survival, and the poor air quality is resulting in debilitating and deadly health risks for forest dwellers such as the Evenk Peoples. Melting long frozen permafrost soil depths have also dramatically impacted Evenk and other Indigenous communities, upending roads and bridges, drying out key wetlands, tilting or destroying houses and foundations, and impacting crops and fields and grazing lands. Traditional livestock agriculture on the Russian side of the border is sustained, but not in nomadic fashion as once was the norm.

The level of government indifference, periodic intimidation and exploitation of Indigenous Peoples and their natural resources is an urgent problem. Declines have been precipitous over the past 30 to 50 years for domesticated reindeer among the Todja, Tofa, and Soyot of Russia despite international and regional efforts to restore some herds. The changing demographics away from nomadism to settlement under the Soviet period is largely responsible, as well as the Communist government’s decision that the live weight of cattle and other non-native species outweigh the benefits of sustaining nomadic reindeer. In 2019, the Committee on the Elimination of Racial Discrimination made several recommendations to the state of Mongolia about the restrictions on fishing and hunting for the Tsaatan people in the Tengis Shishged protected area. On the Russian side, poor economic realities and the difficulties in opportunities for work and education often result in people leaving the remote, rural areas of more traditional living for perceived new opportunities in larger cities like Ulan Ude in Russia and Ulaanbaatar in Mongolia.

Still, there is reason for hope. On the Mongolian side, the Dukha People have seen a resurgence in reindeer numbers through dedicated international support for improved veterinary application and training and positive support from the Mongolian government. The Dukha have been able to avert catastrophe and advance their herds in number to 2,000 in 2019 from just under 600 when such aid projects began. Yak herding has been supported on the Buryat Russian side in the eastern Sayans with some success as well, and has long been a stable enterprise on the Mongolian side of the border among the Darhad Mongols. In the Mongolian taiga, there are currently more young families with children living nomadically with reindeer than in the past 20 years. With the benefit of higher healthy reindeer numbers, less access to alcohol, and the relative freedom that life in the taiga provides Dukha families, there is reason to expect that more positive nomadic futures can be realized.

— Dan Plumley is a cultural ecologist and founder-director of the TOTEM Adirondack Consulting Group.

Top photo: There has been a recent resurgence in reindeer numbers in Mongolia.

All photos by Dan Plumley.