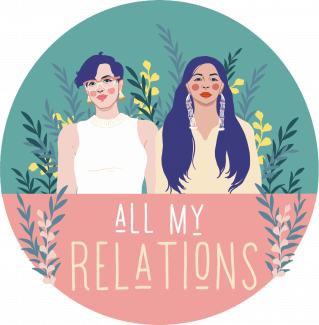 After nearly a decade of conducting cultural conversations in parallel, Matika Wilbur (Swinomish and Tulalip) and Adrienne Keene (Cherokee Nation) have joined forces to produce the podcast All My Relations, in which they explore their relationships to land, to cultural relatives, and to one another. Wilbur is a renowned photographer and founder of Project 562, where she has taken thousands of portraits and collected hundreds of contemporary narratives from over 300 Tribal Nations dispersed throughout 40 states, all in the pursuit of one goal: “to change the way we see Native America.” Keene is a Native scholar with a doctorate from the Harvard Graduate School of Education in Culture, Communities, and Education. She is a writer, assistant professor of American Studies and Ethnic Studies at Brown University, and founder of the popular blog, Native Appropriations. Through their individual projects, and now their joint venture, the two women have been discussing the ways that Indigenous people are depicted and represented in mainstream culture, covering issues of cultural appropriation in fashion and music, as well as stereotyping in film and other media.

The following excerpts are from the first episode of All My Relations, in which Wilbur and Keene discuss the importance of relationships in Native communities, and Indigenous feminism. Some passages have been lightly edited and/or condensed for clarity. 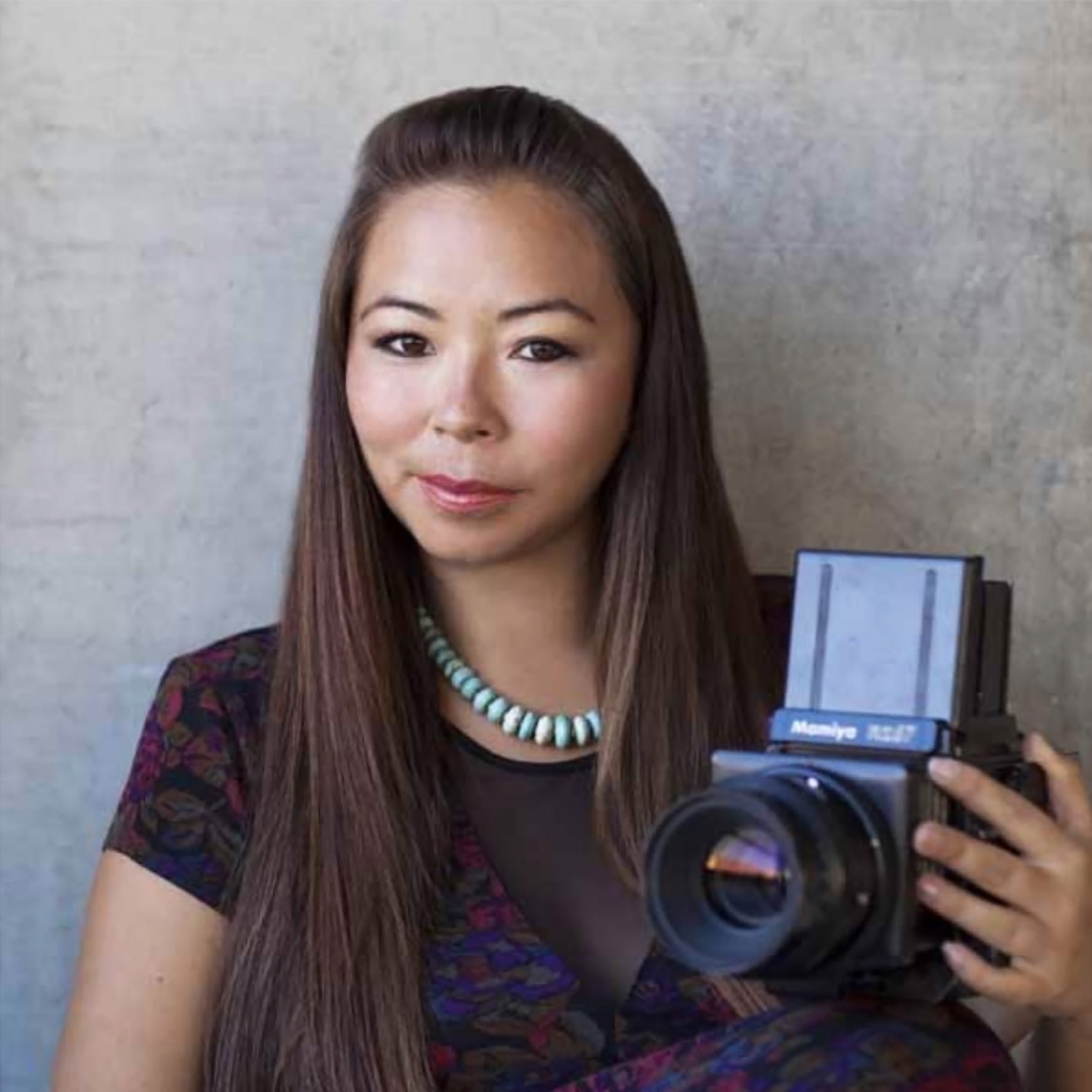 Matika: “All My Relations” is a pretty popular topic throughout Indian Country. In my travels, I’ve found that our primary identity is inextricably connected to our relationships to land; that relationship to land and water is our primary way of identifying ourselves. We also see ourselves as our grandmothers granddaughters, and we see our role and responsibility and purpose directly connected to our lineage. Using that as the backbone for the podcast is really powerful because it is something that we share across Indian Country; these ideas of being relational people, of not existing without being in relationship to a place, to people, to culture. It’s always about those relationships... we have a responsibility as our grandmothers’ granddaughters to continue to carry the conversations forward. I was raised with a very strong understanding of my place in my community as a member of the Wilbur family, as a member of the Joseph family, also as a person of the tide, as a person of the salmon people. My relationship and my identity is deeply rooted in those concepts, and in our language. 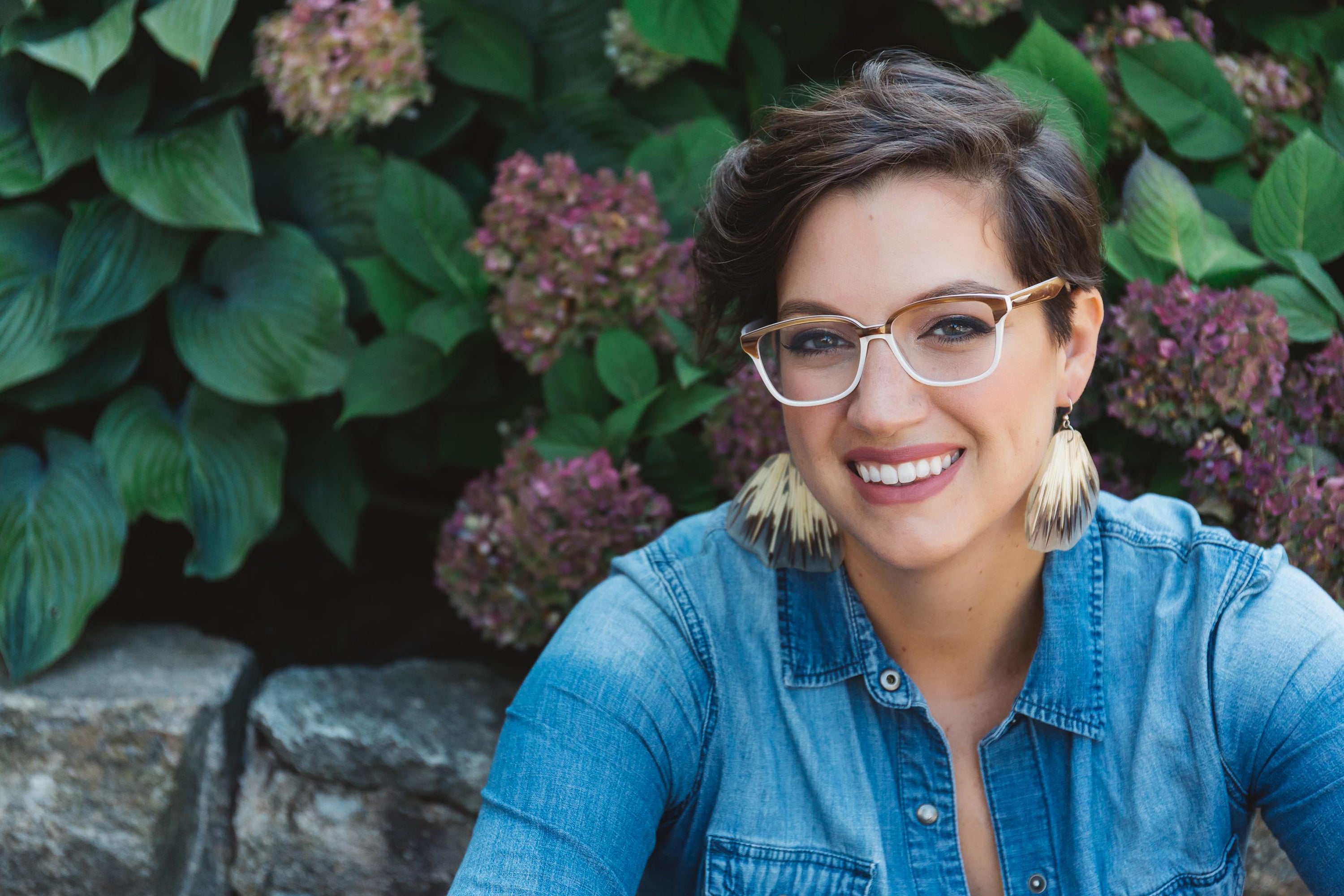 Adrienne: As someone who grew up without those relationships, without the connection to community, not knowing what it meant to be a Cherokee woman, to be a Cherokee person, that has been the biggest anchor in my reconnecting journey is building and finding those relationships. I had to go to my friend Patrick del Persio, who works for Cherokee Nation doing translation, and ask him what the equivalent would be in our language. He gave me three phrases, and I think they all kind of relate to different aspects of this idea of “all my relations,” or “we are all related.” I love that in our community there are these ways of thinking relationally. Both of us are people who care really deeply about representations and how our communities and our families, and Indigenous people overall, are represented in media and society.

Let’s talk a bit about our relationships to the idea of feminism and what it means as Native women.

Matika: I don’t generally identify as a feminist because when I think of feminists, I think of white women, and I think of the ways that Indigenous women were very much excluded from the benefits of the feminist movement.

Adrienne: That’s so interesting, because you are one of the most feminist people I know in terms of your desire for women and folks who are marginalized for their gender identities to be their full selves, and be able to have their roles and communities. I have very similar feelings of feminists—the self-proclaimed feminists in college were not people I wanted to hang out with. It really was reading other Indigenous feminists that brought me to my place of identity as an Indigenous feminist. People like Jessica Yee (now Danforth), who works with the Native youth sexual health network, who wrote some really amazing blog posts about what it means to be an Indigenous feminist. I realized that you don’t have to be white to be a feminist . . .“white feminism” is this idea that your identity as a woman should supersede your other identities. Patriarchy is this nebulous thing that exists, and you’re fighting against it. The difference is for Indigenous communities, we know exactly what brought patriarchy into our communities. We didn’t have this history of oppression of women in our communities prior to settler colonialism. Mainstream feminism doesn’t acknowledge that role of colonialism. To be an Indigenous feminist means that I’m not just fighting against patriarchy, I’m fighting against colonialism.

Colonialism has two different forms: there’s extractive colonialism and settler colonialism. Extractive colonialism is what happened in places in a lot of different countries where an outside nation-state came in and extracted resources from this already existing place to send back to their home country. It built up the wealth and the power of that home country and they established a presence in those places and took over, but didn’t establish a new nation-state there. Versus what happened in the U.S and Canada and Australia and New Zealand, is that idea of destroying in order to replace. Folks came in and they completely wiped out what was there in order to build a new nation-state on top of that. The phrase that I give my students for extractive colonialism is the idea that ‘Y’all left, but you left a big mess behind.’ And in settler colonialism, ‘Y’all never left.’

Matika: When you talk about Indigenous feminism and resisting colonialism, you’re talking about restoring our original identities and our original agreements with our own people, our land, relationship-based identities. If feminism is the fight for equality between men and women, I would not say that that was an issue at all, like Adrienne said, until colonialism arrived here. For me as a Potlatch person, as a Longhouse person, we had very distinct and important and prominent roles, decision making roles, power holding roles in these societies. I wouldn’t go as far to say that we were a matriarchal society, but rather that we were a balanced society. If I’m fighting for any type of rights, it’s the right to restore that balance that was here pre-1800s for us.

Adrienne: A lot of the mainstream feminist icons were racist, fighting to exclude black women from getting the vote. Those values are not something that I identify with. The other misunderstanding is that often non-Native folks look at our communities and the traditional roles that were assigned to different genders in our communities, and see that as somehow being oppressive without understanding entire cultural structures, that the work of women was valued at the same level as the work of men. Also, our communities had roles for folks who didn’t necessarily fit into either of those gender roles. That’s something that settler society has not figured out...this is part of Indigenous feminism too, having a space for folks who don’t fit into a gender binary. Some of our communities had five genders.

When I ask my Native high school students if they identify as being feminists, they definitely don’t. But once we talk about this understanding of what Indigenous feminism is and how it relates to our more “traditional” community understandings of gender, I think it changes the way that they think about this relationship. To be an Indigenous woman means that you understand that women have an equal position, have important roles, deserve important roles, and that your community recognizes that it’s totally fine for you to identify as an Indigenous woman. Because inherent in that is an understanding of equality and gender roles that is not in mainstream white society.

Matika: In some communities the colonial thumbprint has become so deeply ingrained that at times we adopt these principles and we think they’re our own. Patriarchy is very alive and well in Indian country. Because we had to adopt a Western form of government to maintain our sovereign status, that form of government is mostly male-driven and an electoral system. Our people were equally affected by Western concepts and ideas—those belief systems have not necessarily been wiped from my memory or wiped from the way that we’re practicing as governments, as communities, as societies. I would love to see an original order restored to my own community where we move away from electoral system and go back to more of a clan leader, a chief matriarchal system, where the clan mothers choose the chiefs. In Haudenosaunee country, they are still practicing a traditional government and the clan mothers still choose the chiefs. The best thing about that is that if the chiefs aren’t acting right, the clan mothers revoke their chieftainship. When you talk about Indigenous feminism and resisting colonialism, you’re talking about restoring our original identities and our original agreements with our own people, our land, relationship-based identities.

Adrienne: I don’t think people realize that our Tribal constitutions were required by the federal government. The Indian Reorganization Act in the 1930s, the federal government said in order to be a Tribe, you have to have a Tribal constitution. A lot of Tribes still have this boilerplate Tribal constitution that doesn’t match their traditional form of governance at all. There wasn’t an understanding that our societies functioned for thousands of years prior to having a piece of paper that laid out this electoral system. Some of the communities that have continued to use it, it makes sense because it actually matches closely to their traditional governance system; traditionally they did have a leader and a council that function in the same way, and it was done by consensus and vote, so that made sense. But there’s 570+ different Tribes and we all had different ways of governance. Those systems come with them—the assumption of patriarchy that of course you’re going to follow the Western model, which is men are in control and it’s voted on in this “democratic” way. But that’s not necessarily matching traditional values at all.

All My Relations is available on iTunes, Spotify, Googleplay, Instagram @amrpodcast, and at allmyrelationspodcast.com.