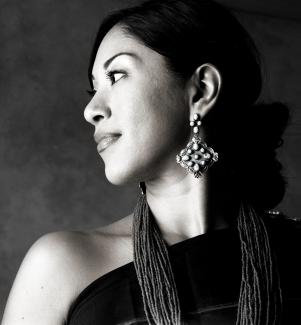 Matika Wilbur, member of the Swinomish and Tulalip Tribe, hit the road in December 2012 to embark on her newest photographic project entitled "Project 562:" an ambitious documentation of Native American people from every federally recognized tribe in the United States. These 21st century images provide a new perspective and update contemporary America’s perception of Native peoples. As of spring 2014, Wilbur has photographed people from 159 tribes, both on reservations and in urban communities. Wilbur says she is driven by the question of who she is as an Indigenous person in a contemporary world, and how other Native people both young and old find their place while managing this dual cultural identity. “We walk in two worlds as young, Native people. We learn to navigate with a moccasin on one foot and a tennis shoe on the other. Maybe we’ll go to ceremony on Saturday night and we’ll come out and use our iPhone,” she says.

The challenge of defining oneself while trying to fit into mainstream society is the undercurrent of “Project 562,” Wilbur’s fourth major photo-documentation exhibit. Previously she photographed Coast Salish elders for “We Are One People;” Native peoples in contemporary surroundings for “We Emerge;” and young Native people expressing themselves in “Save the Indian and Kill the Man.” Despite government intervention and the near cultural genocide of many tribes, the people in these photographs have held onto their sense of heritage while forging a modern identity.

Wilbur’s work on “Project 562” has been compared to the earlier enterprise of Edward Curtis, a 1900s portrait photographer who undertook a similarly massive project of photographing America’s western Native peoples. Curtis believed the tribes were a dying culture and would soon disappear; his now-iconic images were an attempt to preserve these diverse cultures. Wilbur, however, points out dramatic differences in the management, goals, and outcomes of the two projects. Curtis was a white man who posed his subjects in a specific way, providing them with props such as feathered headdresses, which were often from different tribes, and ended up creating mixed portraits, unrealistic images that show an outsider’s muddled perception. Wilbur intends to showcase Native peoples differently: she asks for volunteers, allows them to select the backdrop that means the most to them, encourages them to wear the clothing most significant to their identity, and to hold accessories or demonstrate a movement that reflects important aspects of who they are. Wilbur will set the lighting and adjust basic positioning, but she says it is important that the subjects of her photographs make the choices according to their own experience of identity. “People often ask me why I don’t photograph ‘real Indians,’ but the people that I photograph are real Indians. These are my people,” she says.

After the photo shoots Wilbur sits down with her subjects and records stories about their lives and tribal cultures and experiences, forming a more complete picture that will accompany the photographs during the final exhibit tour. The exhibit’s primary focus is the personal balances that are struck between honoring cultural heritage and family history with a contemporary American ethos. Wilbur hopes that by documenting Native peoples she can present a visual voice to contemporary Native issues.

To achieve the first leg of her project, Wilbur raised $35,000 on Kickstarter. The platform of crowdsourced fundraising bolstered her understanding of how many people were supporting her work. “Project 562” is about the people in the photographs, entire tribes and their histories; it is about the very people supporting Wilbur on her travels and funding the project, because it is something that so many want to see realized. The money she raised on Kickstarter went almost solely to gas and film (she has taken thousands of rolls of pictures). Now, as she continues to travel, she relies on the goodwill of the tribes she visits. They feed her, house her, pray with her. This kind of relationship enhances the honesty and emotions in the photographs and recorded stories. “People are supportive because they believe in the cause. At the core of it all we all want to remember that we come from the same place, that we belong to one another,” she says.

At the outset of the project there were 562 federally recognized tribes, and now there are 566. Federal tribal recognition is controlled by the Bureau of Indian Affairs and grants the tribes certain benefits. The process for federal acknowledgement can take years, with decades of delay not uncommon. (The Shinnecock Indian Nation based on Long Island applied for recognition in 1978 and were not recognized until 2010.) Bureaucratic delays are also created by the complex criteria that must be met to apply for recognition: long-standing historical community and documented continuity, political authority, and documented descent from a historical tribe. Many tribes have difficulty providing the records and detail necessary for this process due to historical displacement, destruction of culture, and lack of documented written language. Because of these issues Wilbur cannot cite an official number for her project, which is one of the points her photography exhibit aims to express: the number is significant. Native peoples are not gone from our society. They are still here and are fighting for recognition by the federal government. Wilbur also intends to include portraits of Native peoples from non-recognized tribes, provided she has enough funding.

During the last year of traveling and photographing, Wilbur gave a TED Talk in Seattle on humanizing and re-imagining Native Peoples. “I’m here to carry the message from the silenced, to show you some of Native America’s beauty and to encourage our collective consciousness to re- imagine the way we see each other,” she said. Stereotypes of Native peoples, particularly in mass media, are negative portraits wrapped in references to systematic oppression that diminish the confidence of young Native people and hinder constructive conversation of present-day issues. Media helps shape public opinion, so when mass media is saturated with Native American cultural appropriation, such as Halloween costumes and exaggerated caricatures for sports mascots, one side of the discourse depicts Native people as inhuman rather than individuals. “People understand that we survived, but the stereotypes remain. Many people fail to recognize the tremendous number of professionals in Indian country, the number of people who are living in cultural duality,” Wilbur said in her talk.

Media portrayals may be improving in response to “Project 562,” however. Wilbur’s project has been well received in the Native media, including Indian Country Today, and it has also been picked up by many mainstream outlets; NBC News and The New York Times have both featured articles on Wilbur as she works her way across the country. And this May, the Tacoma Art Museum in Washington will exhibit a collection of photos from “Project 562” along with hosting an artist’s lecture. On this progress, she says, “My name, Matika, means the messenger. Throughout my life, I have been groomed to approach the politics of our society differently. I am to influence social change not as a politician, but as an artist.”