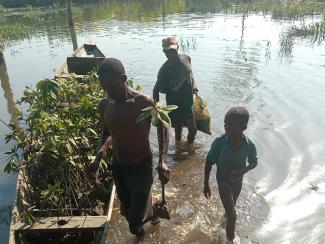 The Ogoni in the Niger Delta region in Nigeria face threats to their livelihood as the quality of their land depletes and the biodiversity of the local ecosystem deteriorates due to oil and gas extraction on their territories. Their farmlands are less fertile and integral plants are becoming extinct, escalating food insecurity. Through a grant from the Keepers of the Earth Fund (KOEF) to the Lokiaka Community Development Centre, volunteers at Lokiaka worked to replenish the land by conducting two intensive training sessions with Ogoni women. Workshops taught 65 women farmers the skills to start mangrove and fruit tree nurseries and trained 55 women to make fuel efficient stoves out of clay. Lokiaka emphasizes the role of Indigenous women farmers in maintaining the health of the land and ecosystem to ensure that women are recognized as important stewards of the land. With the aid of KOEF’s resources, Lokiaka helped Ogoni women utilize their natural resources to improve their living standards while reducing carbon emissions, deforestation, and climate change. 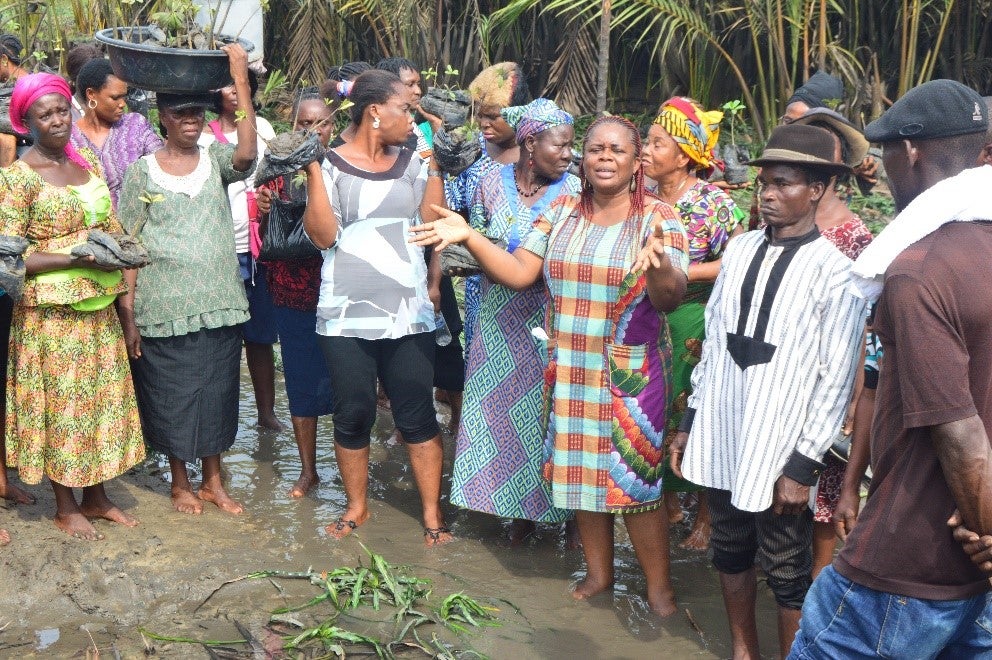 The population of mangroves in the Niger Delta Region has substantially diminished due to clearings for commercial agriculture, urban construction, pollution caused by artisanal refining, oil spills, and runoff containing chemical and biological contaminants. Additionally, the changing climate has brought an influx of cyclones, hurricanes, and tsunamis that cause severe damage to the mangrove population. Mangroves are extremely versatile in their usage for the Ogoni people as they can be used as water resistant wood for buildings and furniture, serve as domestic fuel, protect shorelines from erosion, and filter pollutants to maintain water quality. Participants learned about sustainable nursing of mangrove propagules and how to transport them within the mangrove swamp forest
of Kwawa. The women also learned how to preserve seedlings in fruit tree nurseries; encouraging plant growth in these communities combats food insecurity and health issues. Many women also cultivate medicinal plants and local herbs to remedy illnesses. 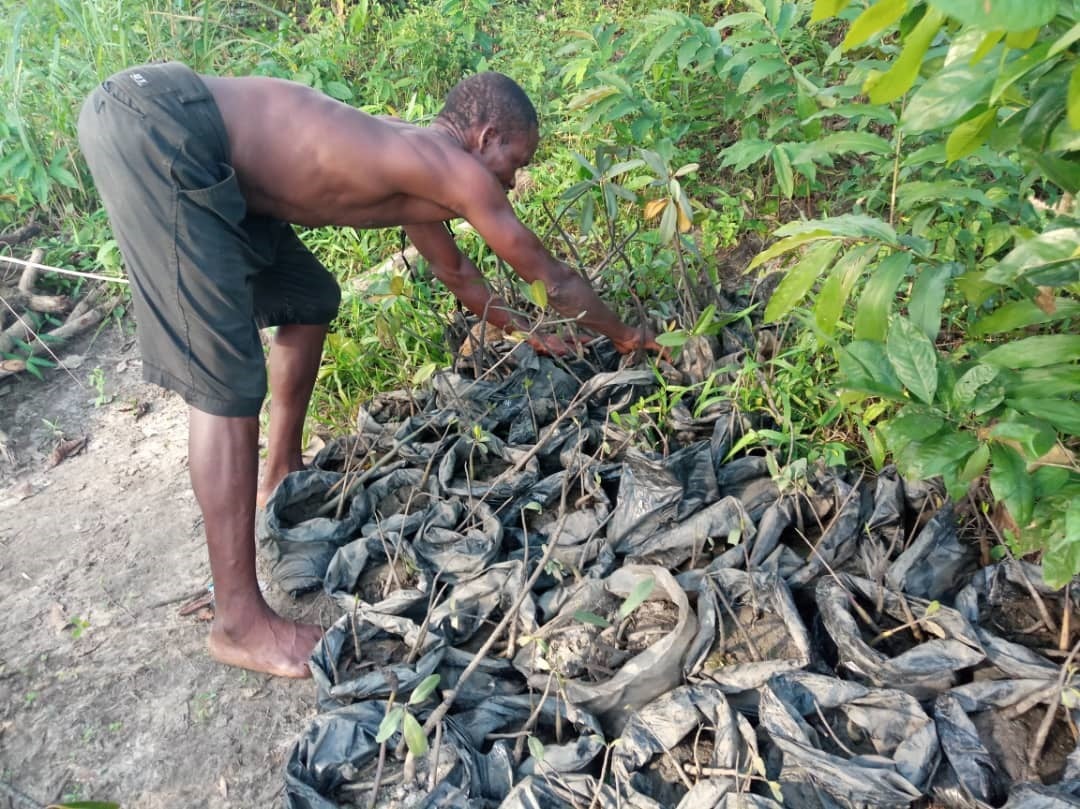 Barisi Dumbor, a participant from Kegbara Dere in the Gokana Local Government Area of Rivers State, raised several nurseries of palm nut, fruit trees, and mangroves. This is one of the most polluted areas in Ogoni, but Indigenous women trained by Lokiaka effectively utilize their resources to grow and harvest plants here. Instead of buying seeds, she gathers them from waste dumping grounds, under fruit trees, and from the fruit she eats herself. Nursery cultivation has proven to be a low cost and highly effective way to increase her income through farming: “Raising fruit tree nurseries is new to me, and it has helped to put food on my table and helped train my two boys,” Dumbor commented. “Now I know that I do not need to have farmland before starting my agriculture business. Even my veranda and garden can give me money today, and I’m happy.” Namon Grace Nwidee, another training beneficiary, said, “I agree with the resource person who said planting trees will wipe away our tears and would drive away hunger
in the land.” In addition to increasing food accessibility in Ogoni, women also practice sustainable farming and forest management techniques to combat deforestation and mitigate climate change. Participants were able to support plant nurseries despite the harsh weather conditions and insecurity within their provinces with the help of Lokiaka’s training and resources. However, women in the Nyokhana district, the largest and most remote area in Ogoni, were unable to maintain their nurseries due to violence and conflict. 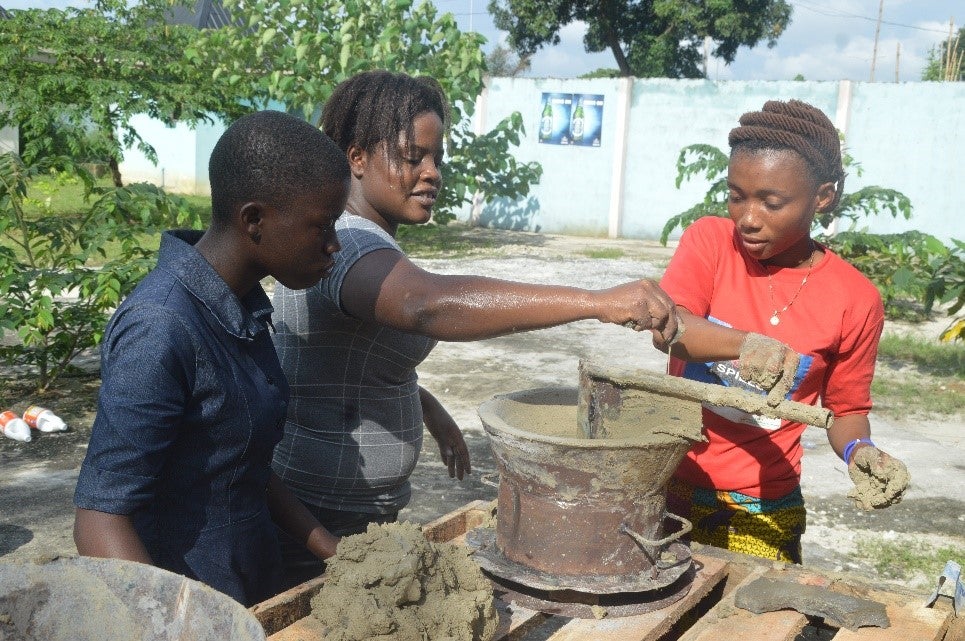 The second training Lokiaka offered taught Ogoni women how to make fuel efficient stoves. Many older women are potters, but the practice is less common among younger generations. The technology of clay stoves is transforming the skills of the potters into a valuable asset for the community. Producing and using these stoves reduced 55 households’ dependency on forest wood for heat and energy, lowering carbon emissions. The stoves also serve as a stepping stone towards the implementation of forest conservation and ore sustainable, environmentally friendly practices.

The importance of Indigenous women farmers cannot be overstated. With this work, the Ogoni community is contributing to climate resilience in several ways. Mangroves are among the most carbon rich tropical forests and can store twice as much carbon on a per area basis as salt marshes, preventing carbon from escaping into the atmosphere as a greenhouse gas. Carbon storage also results in the accretion of sediment, allowing the coastline to keep up with rising water levels. By training Ogoni women in sustainable agricultural practices, their knowledge of conservational forest practices will continue to rejuvenate the local ecosystems and improve the health of Ogoni communities.