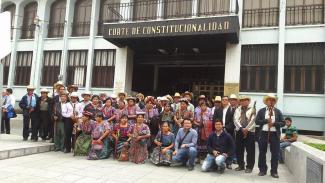 "We are born with wings in a patriarchal  system that strives to draw borders, build  walls, and forge cages." — Guisela López

After years of persistence, Chajoma’ people have successfully recovered their communal lands. The Spanish invasion of Central America brought violent dispossession to Maya peoples’ communal lands, and death was the destiny of those who refused to leave. Over time the Spanish crown implemented la encomienda, a system that allowed Spanish people settled in Guatemala to legalize their control over communal lands with the support of the corrupt authorities of the colony. Some communities like Palin, Esquitla managed to maintain their communally governed lands; others, like the Ch’orti’ and Chajoma’, have only recently recovered them.

The territory of Chuarrancho, formerly known as Chwatutuy, is a municipality located in the metropolitan region of Guatemala. The Chajoma’ people have lived here since time immemorial and have practiced land inheritance from parents to sons and daughters through oral tradition, exercising principles and values as Indigenous Peoples. In other regions, the 30-year civil war and the repression of Maya people  forced them to relocate and leave their land. Some of these lands were redistributed among high military commanders and their allies. With the signing of the Peace Accords in  December 1996, Indigenous communities that decided to return to their places of origin found their properties occupied and were denied a path to recover their ancestral lands.

Today, due to mining, oil extraction, monocropping, and hydroelectric dams, among other mega projects, the lands of Indigenous Peoples are still being invaded and stolen by national and international corporations. The corporate invasion creates conflicts between companies and the local populations through the spreading of diseases, harassment, rape, and murder of those in the community. Companies create further divisions within Indigenous communities by offering jobs or bribes, causing some members of the community to take the corporations’ side against those who are defending their land and natural resources.

Cultural revitalization and organization have been funda-mental for the Chajoma’ people to challenge the system and recover their ancestral land amid many historical traumas, socioeconomic crises, and violence. In 1897, Guatemala recognized Chuarrancho people’s rights of ownership to a farm. Despite legal stipulation in the General Registry of Property, in 1950 the lands were placed under the auspices of the municipality. Over time, the dynamics of communal possession changed to municipal public land, allowing the municipality to illegally take possession of the land. Eventually the lands were ceded to mining and utility companies, with a portion sold to a telecommunications company.

When Santos Alvarado, legal representative of the Chuarrancho community, looked into the illegal corporate occupation of Indigenous land, he found that the municipality had authorized the exploration of a Canadian mining company without consulting the local people. This discovery led the community to organize and conduct an investigation to determine the legal status of the farm. One document,  dating from 1739, revealed that the Chajoma people, before being dispossessed of their lands, had requested to purchase their own lands from the Spanish Crown. The request was granted and the territory of 442 caballerias (an ancient  Spanish land tenure measurement) became private property of the Chajoma under the communal administration. The research concluded that in 1955, Chuarrancho elders petitioned the municipality to protect the title, but the State, through the registry of the property and the municipality, took their lands, violating the human right of Indigenous Peoples to their land and territory.

In 2012, the ancestral authorities of Rtun Tinamit, the Maya Kaqchikel Chajoma’ Indigenous community, organized a legal action to recover their communal lands. Their research helped to develop strategic litigation, and after 2 years of legal and political struggle, on August 30, 2017, the ancestral authorities succeeded in recovering their lands. The Chuar-rancho were recognized as the legitimate owners of the Farm 339, which consists of 31.3 kilometers of communal lands. Once the lands were under Indigenous ownership, the ancestral authorities organized themselves as administrators, protectors, and conservators of the communal assets of land and natural resources, promoting a healthy environment and good living for all.

Víctor Leonel Hernandez, administrator of the communal land, explained the process: “In 2015, we drew up a 10-year plan to register of all the owners of communal lands. Families have voluntarily approached the administration to update information on how they have inherited the land. A certificate of possession is issued to them, and if there is a need to measure land boundaries, my work is to conduct this assessment for the families. Indigenous women have begun to organize as well by involving and learning about these processes of land recovery. Currently, 13 women are members of the ancestral authority and are constantly receiving training on social and political topics. Their voices and votes are taken into account with no discrimination and they can make decisions relevant to the community.” Youth also have a role in taking care of the lands. They are being trained to understand the history of the community in leadership and community management, and to be able to participate within the system of ancestral authorities. One such example is O`ch` Tinamit, a youth organization started by 10 young people, which organizes cultural events for the community.

The community of Chuarrancho is an example of a successful land recovery. The administration of these lands has been assumed with responsibility, dedication, honesty, and principles from the Maya worldview and community ancestral practices. The vision for these lands is being developed by the community, who are considering distributing small portions to families with special housing needs, as well as using several portions of land to plant a variety of basic grains, vegetables, and fruits that can be distributed in the community. It is a priority for the Chuarrancho community to share their experiences with other Maya communities in Mesoamerica and other Indigenous nations to replicate this practice of recovering land.

For a long time it was assumed that Indigenous nations in Guatemala did not have collective land titles, as the reduction of Indigenous nations to pueblos (towns) and the encomienda system did not allow for such a parallel system to private property and title. However, anthropological and historical research has revealed that collective land title does exist for the Kaqchikel in Chuarranco, the Ch’orti’ in Jalapa, and other Indigenous nations in Guatemala. Indigenous Peoples’ resistance to protect their territories, natural resources, and own systems of governance have survived through colonial history. In the case of the Maya, they had to pay title on their own lands to the Spanish Crown after they were stolen by colonizers; a double violation of their right to their lands and territories. The recovery of Indigenous communal lands in Guatemala has not been an easy process within the State legislative and judicial system. In some cases, there has been persecution and even assassination of farmers and leaders organizing the community. Still, the fight must continue for the conservation and protection of natural resources for future generations.

Ancestral authorities at a public hearing at the Guatemalan Constitutional Court during the communal land recovery process.