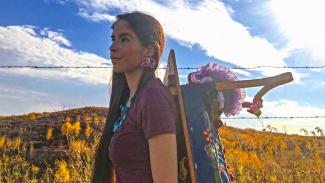 My mother was a revolutionary. She lived her life authentically, expressing exactly who she was and exactly how she felt—even in moments that society deemed “inappropriate.” And that meant she felt everything as powerfully as the fire that burned inside of her, and she loved as fearlessly as the words that fell from her tongue every day. She was a living, breathing example of all the mothers and grandmothers who have upheld Indigenous insurgence, claiming a place for themselves in systems that were seeking to terminate them.


Because of this, my mother knew struggle as deep as the land. She inherited it from her father, my mishomis. He had learned how to be a parent from the “teachers” who mistreated him at residential school, which was filled with dysfunction, addictions, and abuse. My mother struggled as a parent, as her father had, and raised me from this place of colonial pain. But underneath all those layers of trauma, loss, sadness, and violence, she was the uprising of authentic Indigenous love.


I knew that before I became a mother, it was vital for me to find that place of Indigenous love within myself. I made the commitment to heal my relationship with my mother so that we could end this cycle of discord and abuse. I needed to ensure that my future children would have the opportunity to grow in a space of this Indigenous love, and to know that Indigenous kinship practices are the answer to healing our families.

That meant that I had to dig through generations of colonial pain that had become ingrained within my genetic makeup. At times, the pain, anger, and frustration were unbearable. But all that I went through and all the work I have done means that my daughter will know the truth of Indigenous love. My mother’s anger imprisoned me as a child. I realize now that her shaming tactics were the same tactics my mishomis experienced at residential school. There were many fights with name-calling, threats, and physical violence. Sometimes, if I showed emotion, she’d spit on me. Other days, she’d shame me. Each time, she blamed her father. “I am so sorry,” she’d say afterwards. “He did the same to me,” or, “He did worse to me.”

The abuse escalated until I got away at the age of 18. University was my savior, though a superficial one. I loved my mama wholeheartedly, but the pain that seeped through my upbringing was too much, and ultimately it followed me to school. Self-medicating with alcohol and drugs helped me cope, and so did being in a relationship. Yet because violent love was the only love I knew, I fell into an abusive relationship.

For three years, I endured name-calling, threats, and physical violence from the boy I thought loved me. At the time, I had a practicum placement at a community center working with young people. While I was preaching sobriety, healthy relationships, and self-love, I was living the exact opposite. I had to make changes. It was time to dissolve every ounce of toxicity in my life. Little did I know, things would get worse before they could get better.


I left him and changed my phone number, yet one night, he found me. He came into my home and raped me. For hours afterwards, I scrubbed myself in the shower and cried. Then I made a decision: I was not going to be a victim any longer. I sobered up. I sought out traditional Indigenous ceremony. I listened to Anishinaabemowin, my mother tongue, and decided to abandon my role as victim in my relationship with my mother. After one particularly abusive phone call, I told her I was done. Ultimately, I divorced my mother and any societal expectations and ideals of what a mother-daughter relationship should be, and notions of what a mother is. 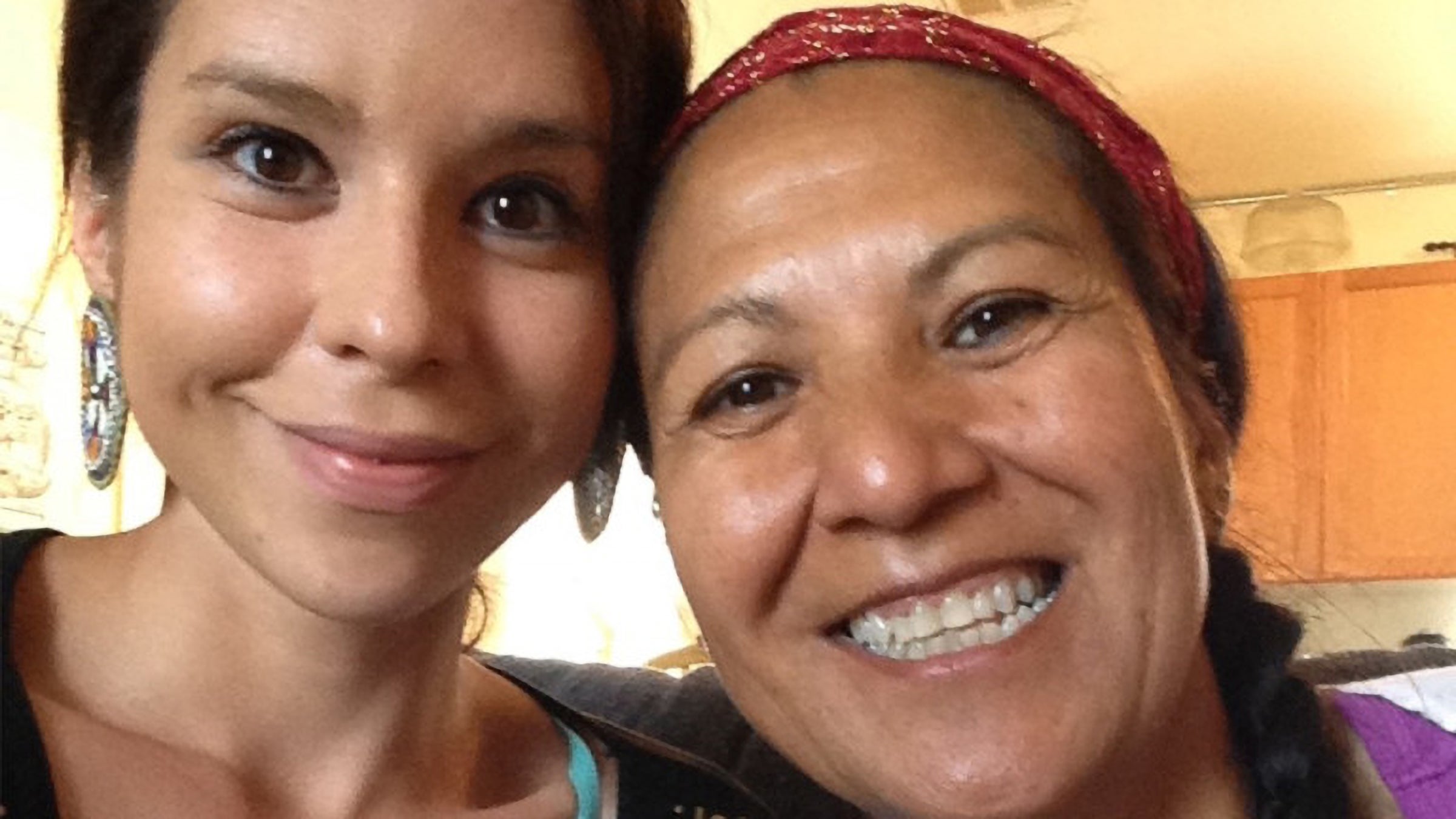 Andrea Landry and her late mother, 2014.

Over the next year, we both sought help. We both prayed hard to our ancestors, the ones who left before us, to Gitchi Manitou, the Great Creator. We both healed. And the most powerful thing about it was, we didn’t know that we were both doing it at the same time.


I was 22 when I really saw my mother. I called her one evening after not hearing her voice for such a long time. “Hi, Mama,” I said. We sobbed uncontrollably, talked for a long time and made plans to see each other. The mother I was talking to was brand new, so full of life and love—she, too, had healed from her past. And my mother ultimately saw her daughter, who had also healed from years of colonial pain. Forgiveness was difficult; forgiving my mother also meant I had to forgive the generations of abuse that colonialism had inflicted upon my family. It meant forgiving ourselves for holding on to our rage and developing toxic behaviors to deal with it. It meant forgiving my mishomis for harming my mother. It meant forgiving myself for accepting toxicity and abuse from others. But it was within that forgiveness that I birthed my own revolution.


Once I forgave my mother, our lives became a series of memories that will be spoken about long after we go. The road trips, the ceremonies, the smell of smudge every morning when I stayed with her—we tried to make up for lost time.


Five years later, when I told her she was going to be a nokomis, a grandmother, she cried with joy. When she heard the heart beat during a prenatal visit, she cried so loud the whole clinic heard her. “Oh! Chi-miigwech!” she said over and over again, “Thank you very much!” Her excitement was infectious. She would speak to the baby, her head at my belly when I wasn’t even showing. I’d laugh, embarrassed, and she’d laugh, sing and speak Anishinaabemowin to the baby growing within me. My mother’s presence in my child’s life was going to be a gift.


Then everything shifted. One evening when I called her, she told me she had a really bad migraine and needed help. I knew it was something more. My anxiety peaked; I called my uncle. He rushed her to the small local hospital, and they airlifted her to Thunder Bay. The last words I heard my mother say were, “I’ll call you back; I’m going to be sick.” She’d had an aneurysm that erupted. She was brain dead and on life support by the time we arrived. I made the difficult decision to take her off life support, following through with her wish that she not be on it for longer than 24 hours. My mother taught me to celebrate life and to love, even in times of deep, deep pain. So, that is what we did, with a four-day celebration of life with fireworks, food, friends, fun, and tears. She taught me that to grieve is to love. So I grieved, and I loved. There I was, 19 weeks pregnant with my first child, without my own mother. I cried. I yelled. I howled. I prayed. I smudged. I sang all the Anishinaabe songs she taught me. I let all my pain out so my child wouldn’t feel it.


My heart was broken, but I mustered all the energy I could and envisioned love completely surrounding my baby. And I made the grieving process a part of my daily ritual for the sake of the well being of my baby—grief had to come out in order to let the love in. To this day, my daughter recognizes the songs from my homelands, the songs my mother sang to me—a powerful example of Indigenous kinship continuing on after death.

My mother raised me from a place of her colonial pain. But ultimately, my mother gave me the tools for how to be a mother from a place of Indigenous love, the ultimate weapon in destroying colonialism. Healing my relationship with my mother, freeing myself from the confines of generations of colonially created pain, was the key to raising my daughter the best way I knew how. Indigenous kinship practices, like disengaging from authoritarian parenting patterns and acknowledging my daughter’s voice and love of learning on the land, is now our family’s life force. It is everything.


Sometimes I still grieve my mother, and I cry in front of my daughter. At the age of two, River-Jaxsen will stare at me quizzically, and I will explain to her, “I miss my mama,” and, “Sometimes Mamas have to cry too.” She will pat my shoulder and go on her way. Whenever my daughter feels afraid or upset, we remind her to express and release any emotion she feels. She is already learning behaviors of emotional expression, and that honors her autonomy and also unties generations of colonially influenced parenting.

I am showing my daughter through songs from her homelands, through words in both Nehiyaw (Cree) and Anishinaabe (Ojibway), and ultimately through the fearless expression of human emotion, that to be herself, in every expression of her being, is absolutely amazing. Because by emotionally letting go, we as Indigenous Peoples will fundamentally rise.


— Andrea Landry (Anishinaabe) is a mother, professor, therapist,and Indigenous rights defender who prioritizes Indigenous ways of living. She teaches for the First Nations University in Regina, and formerly taught for the University of Saskatchewan.

A longer version of this article was originally published in Today’s Parent in June 2020.

Top photo: Andrea Landry and her daughter in a tikinagan, 2016.