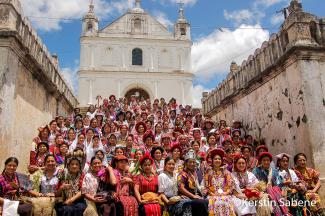 At the end of each July in the cloud forested highlands of Cobán, capital of Alta Verapaz, Guatemala (‘the land of true peace’), more than 100 young women from the Maya world gather to celebrate their rich traditions and Indigenous cultures in one of the most unique events of its kind, the Rab’in Ajaw. Translated from Q’eqchi, Rab’in Ajaw means “Daughter of the King.” While the event is nominally referred to as a beauty pageant, it is focused on spiritual beauty, intelligence, leadership skills, and knowledge of cultural and historical traditions. “The Rab’in Ajaw is an opportunity for young people to be able to influence socio-cultural environments. It’s an open and safe space where we can participate and help to improve some of the negative conditions that affect our youth and Indigenous population,” explains last year’s winner, Marleny Yojana Garcia Jiménez, a 21-year-old primary school teacher from Ixtahuacan, Huehuetenango.

The annual pageant and coronation of the new Rab’in Ajaw is the most anticipated and well attended part of Guatemala’s National Folklore Festival. One of the greatest draws of the event is hearing the messages of the contestants; the opportunity to speak in public is what makes the Rab’in Ajaw an opening to the radical side of Maya women in Guatemala. Last year, Garcia Jiménez spoke eloquently about sexual abuse, a subject that most likely would have been taboo in this setting only a few years ago. “I chose this topic because it’s a very impactful issue now not only in Guatemala but internationally as well,” she said.

Two days before the actual coronation and election, each candidate must deliver a short speech before a panel of judges, first in her native Mayan tongue (there are approximately 25 Mayan linguistic groups in Guatemala), and then in Spanish. Gladis Choc and Mayra Cano, president and vice president of a four-member Folkloric Committee that oversees all of the Rab’in Ajaw activities, explained that each candidate is sent a list of seven topics to choose from in advance. “Last year’s topics, prepared by three local professors, ranged in subject matter from the importance of Indigenous women’s participation in politics to the more sensitive issue of sexual violence,” Cano said. 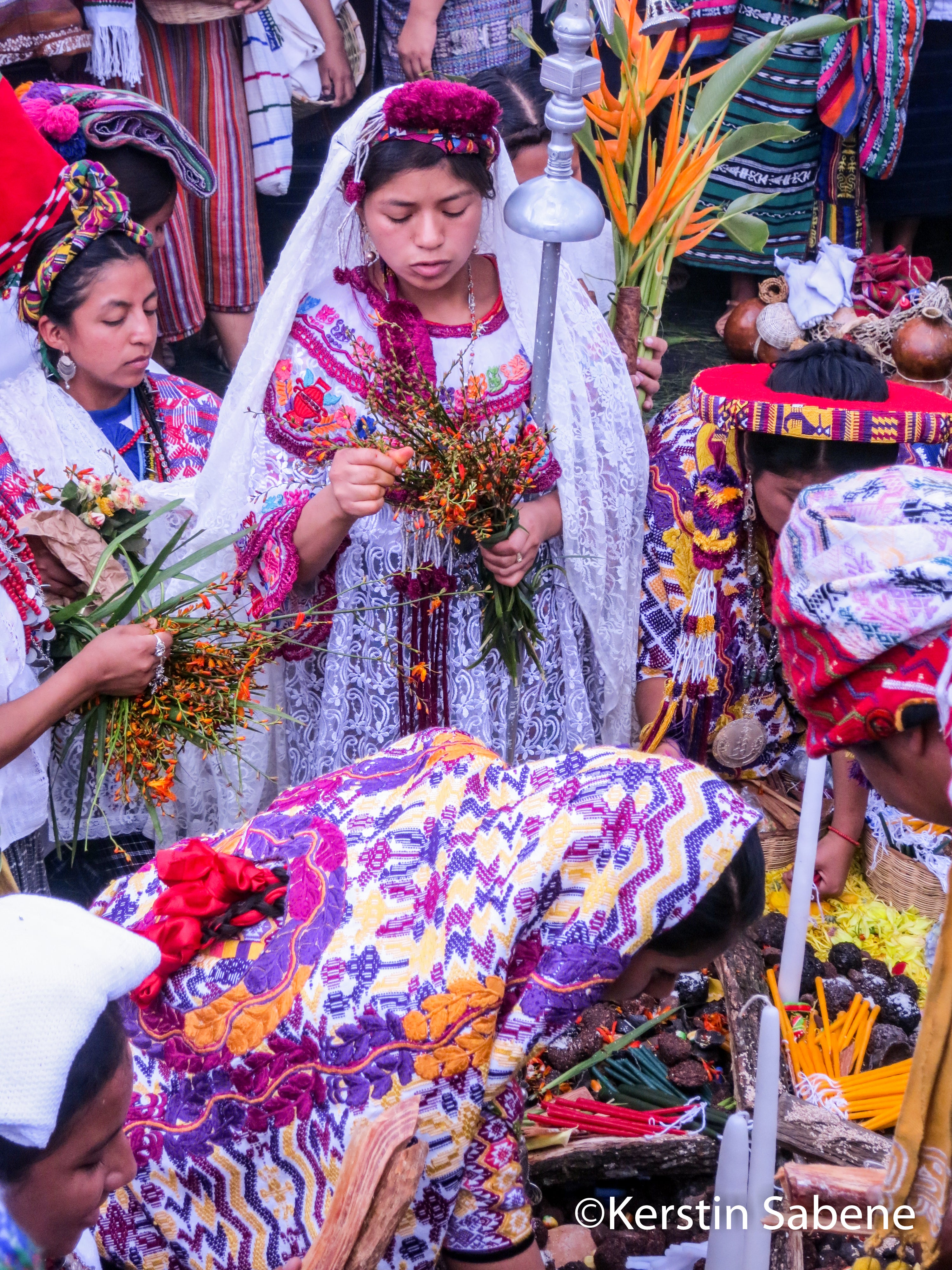 Based on their compelling speeches, 13 finalists are chosen, the identities of whom remain secret until the pageant and coronation. It is during the first part of this main event that all of the candidates are officially introduced to the audience, each of them bestowing gestures of greeting and wearing the traditional costume of her region. Once the identities of the finalists are announced, each of the 13 candidates must respond to an additional question without preparation. The winner is then chosen and crowned by the outgoing queen, who places a beautiful silver crown adorned with three long, green quetzal feathers on the incoming Rab’in Ajaw.

The young women seize their time in the spotlight to express their personal views on important social, environmental, or political topics with grace and poise, delivering impassioned and articulate oratory performances. “To the heart of heaven and to the heart of earth, grandmothers and grandfathers illuminate my path,” said Eva Esmeralda Chaclán, as she took to the stage in July 2017 representing the K’iche-township of Xela, Quetzaltenango, the second largest city in Guatemala. Chaclán, then 20 years old, spoke passionately about the importance of family and the role that women must continue to play to protect the physical and spiritual well being of children. She lamented the disintegration of the family unit caused by poverty, migration, and violence, and above all the loss of values and principles to modern society where accumulation of wealth and consumerism have taken priority. She ended by asserting that the cohesiveness of family is fundamental in protecting future generations “as the State is incapable of giving us that security.”

The first Rab’in Ajaw took place in 1968, and the winner was crowned the “India Bonita Cobánera,” (Cobán’s Beautiful Indian Queen). The pageant was founded by Marco Aurelio Alonzo, an Indigenous/Ladino school teacher who championed the Maya movement of the late 1960s. “I saw the Rab’in Ajaw as a means of rescuing and bringing about a better understanding of Maya cultures, its diverse languages and sacred traditions,” he said. Today, the Rab’in Ajaw is a widely anticipated event broadcast across Guatemala on national TV and covered by a multitude of media outlets. In its early years, the pageant was not without controversy. In June of 1978, in the town of Carchá, not too far from Cobán, a local Indigenous beauty pageant was held to elect a queen who would go on to represent her community at the national pageant in July. Fidelina Tux Chub was not an average young Indigenous woman. As she approached the stage, she did not perform the required son, a native dance that is accompanied by marimba music. Instead, she began her speech by asking for a moment of silence out of respect to the fallen victims of Panzós. 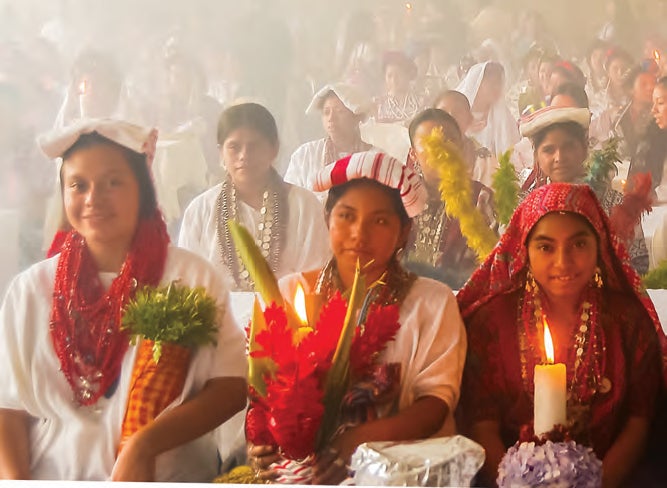 Photo: Rab’in Ajaw candidates waiting to deliver their speeches at the Sociedad de Beneficencia in Coban.

Just 11 days earlier, on May 29, 1978, at the height of the Guatemalan Civil War, one of the largest massacres of Maya civilians occurred in Panzós, a municipality located about 150 kilometers east of Carchá. “Ladies and Gentlemen, I am here with sadness. You will have noticed that I didn’t enter dancing, because our pueblo is living a tragedy. I couldn’t be happily dancing, knowing that my brothers are crying for their loved ones who have shed their innocent blood…” Tux Chub was disqualified by a mostly ladino jury, who cited her defiance of protocol in her failure to perform the required dance. Newspaper headlines and a large part of the population thought otherwise, suggesting it was her message that disqualified her. Despite her eventual disqualification, her boldness and the power of her speech nevertheless had a significant effect on the evolution of the Maya Movement.

Forty years later, a self-assured Garcia Jiménez took to the stage at the Sociedad de Beneficencia in downtown Cobán where she delivered an impassioned discourse on sexual violence. “Sexual violence is a phenomenon that affects all Guatemalan people, especially women and children who are more likely to be victims,” she told the assembled crowd, later explaining that she “wanted to leave a small message of reflection for all people who were in the audience at the time, because everyone has to help improve these mafia conditions that afflict us.”

Gender-based violence has reached epidemic proportions in Guatemala. Plagued by an ingrained culture of sexism and machismo, Indigenous women especially (because of their ethnicity and lack of opportunity) are under constant threat of domestic and sexual abuse. The department of Huehuetenango, where Garcia Jiménez is from, has one of the highest rates of child pregnancies in the country. Gender-based violence is also one of the biggest obstacles Maya women face if they participate in social activism. Juana Ramirez Santiago, a 57-year-old Maya Ixil community leader and human rights defender, was shot dead on September 21, 2018 in the department of Quiché. Ramirez was a founding member of an organization fighting for women’s rights and the 21st human rights defender murdered in Guatemala last year.

In a country beset by poverty, violence, and migration, young Indigenous women wield tremendous power in confronting social injustice. The Maya women who compete in the Rab’in Ajaw are educated and employed or are continuing their studies; they are the agents of change. Most of them have been discriminated against at one time or another for their ethnicity, yet they continue to be significant players in resistance movements calling for basic human rights in Guatemala. They radiate hope for future generations and are seen as role models in their communities and for Guatemala.

—Kerstin Sabene is a photojournalist currently based in Guatemala. The next Rab’in Ajaw pageant will take place in Cobán on July 20, 2019, and is open to the public.