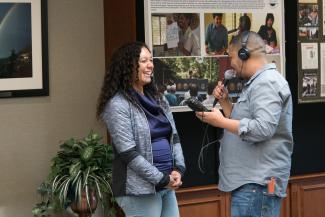 "I grew up under my maternal ancestral mountain, Tararua, spending much of my childhood exploring our rivers, beaches, and forests,” says Tui Shortland (Ngāti Hine, Ngāti Raukawa ki te tonga), who hails from Aotearoa (New Zealand). “I was named Tui because when I was born, the Tui, a bird that plants the small seeds in the forest, was going extinct. This, I believe, was not only a cultural indicator of my environment, but it also set me on the path to protecting and promoting living in harmony with Mother Earth.”

Shortland recognizes that climate change is the biggest issue faced by Indigenous communities today; as she explains, “not only are the impacts of climate change already being experienced by many, such as sea level rise, but also the violations by the fossil fuel industry on Indigenous Peoples’ territories and livelihoods. A large part of my work is focused on raising the visibility of marginalized Indigenous communities issues’ and promoting Indigenous rights and traditional knowledge, innovations, and practices as solutions to the management of climate change.”

Shortland has worked with Indigenous authorities, leadership, and land trusts in environmental management. She assists eco-business development and has been involved extensively with the United Nations in regards to Indigenous biological diversity, serving as a Pacific regional representative. Shortland is currently working with the International Indigenous Forum on Biodiversity, a collective of representatives from Indigenous governments, Indigenous NGOs, and Indigenous scholars and activists that organize around the Convention on Biological Diversity and other key international environmental meetings to help coordinate Indigenous strategies and participation at these meetings by providing advice to governments and attempting to influence the interpretations of government obligations to recognize and respect Indigenous rights.

“My elders, who have been my mentors, have taught me humility, strategic thinking, activism, and resilience, and I constantly draw inspiration from my Indigenous comrades in the movement,” Shortland says, adding, “I have recently returned home from the COP23 where I worked with the International Indigenous Peoples Forum on Climate Change on the Local Communities and Indigenous Peoples Platform. We were able to have the COP adopt a decision on the Platform that includes our principles of full, equal, and effective participation of Indigenous Peoples; Free, Prior and Informed Consent; and funding and selection of positions through our own Indigenous processes. Our next work will start straight away.”

As the director of Te Kopu Pacific Indigenous and Local Knowledge Centre of Distinction, Shortland focuses on traditional knowledge and customary use of biodiversity, cultural health indicators, Rongoā (traditional Māori medicine), and Māori cultural values of the environment and traditional ecological knowledge. Some of her career highlights include turning an iwi Resource Management Unit around to be self-sustaining; working with the Karen people of Thailand to develop a monitoring framework and map their territories based on their medicines and hunting practices; and most recently, developing a successful process to assist scientists and Indigenous Peoples to work together in benefit sharing of biological resources.

Shortland is managing director of Awatea Services, a collective of Indigenous environmental managers working in Indigenous communities for Indigenous Peoples’ organizations, non-government organizations, and local and central governments in various parts of the world. A specialist in traditional knowledge of forest and inland waterways biodiversity herself, Shortland describes her work as “establishing stakeholder and community collectives for catchment management, environmental policy, and traditional knowledge indicators for monitoring programs.” As part of this effort, she has created a sacred sites database for her Tribe, along with biocultural community protocols that established a framework for co-authoring with researchers coming in to study her Tribe’s territory.

She also works as a co-founder of Native XP, which is a global Indigenous tourism platform operating in over 30 countries to build cross-cultural understandings and alleviate poverty through Indigenous enterprise and entrepreneurship. On her newest role as Cultural Survival board member, Shortland says she is “keen to support the work of Cultural Survival and lend my skills and networks to the aspirations of the Board."

All photos by Jamie Malcolm-Brown.