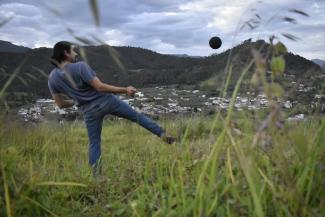 The oldest discovered Maya ballcourt dates back to 1400 BCE. However, rubber balls have been found even before this date. Some have claimed that the Maya ball game disappeared, but as Indigenous Peoples, we know that the game never stopped being played. We proudly say that this tradition has been going strong for three millennia. After it was forbidden, our people played it in secrecy. In many communities the game did disappear, but knowledge keepers carried it into our present day. Today the game is played all over Mesoamerica, where teams are keeping this tradition alive. The most popular variations in Guatemala are Pitz and Chaj-chay.


Many are pushing to revitalize play to promote well being through sports, but more importantly, to connect youth with their heritage. The Maya ball game was not just practiced as a mere sport; it holds ceremonial and spiritual significance and is part of our mythology. Legendary mythic Maya twins, Hunahpu and Ixbalamke, were great ball players and avenged their father’s death through a match. Depictions of players are found in ceramic work all over the Maya world. In Guatemala and in Mesoamerica, there is hope by many of us Maya people that this game will continue to be played and will reconnect us with our roots. Through it, we are able to understand the cosmovision of our ancestors in regards to body movement, but also about other bodies in the universe, such as the moon, the sun, planets, and stars. We also learn about other traditions, such as acrobatic dances that took place before matches. We can connect to our spirituality through it in a deeper way. It makes us engage with our culture in a way that is different from theoretical learning. Above all, it offers us an opportunity to learn about our Maya culture from a perspective that strays from the usual oppressive story of conquer and colonization that we have heard over and over again. The Maya ball game gives us an opportunity to reconnect with that part of our history that precedes European invasion.


Enrique Salanic is a Maya K’iche’ actor from Cantel, Quetzaltenango, Guatemala. He has starred in two films: Dias de Luz, directed by Guatemalan filmmaker Sergio Ramirez, and Jose, directed by Li Cheng, which won the Queer Lion Award at the Venice Film Festival. Salanic has also acted in other films in supporting roles. He is an Ajpitz (Maya ball game player), an Ajq’ij (Maya time keeper), and an English to Spanish interpreter and translator. His educational background is in biochemistry and psychology. Cat Monzón (Maya K’iche’),Cultural Survival executive assistant, recently spoke to Salanic about his passion, the Maya ball game. 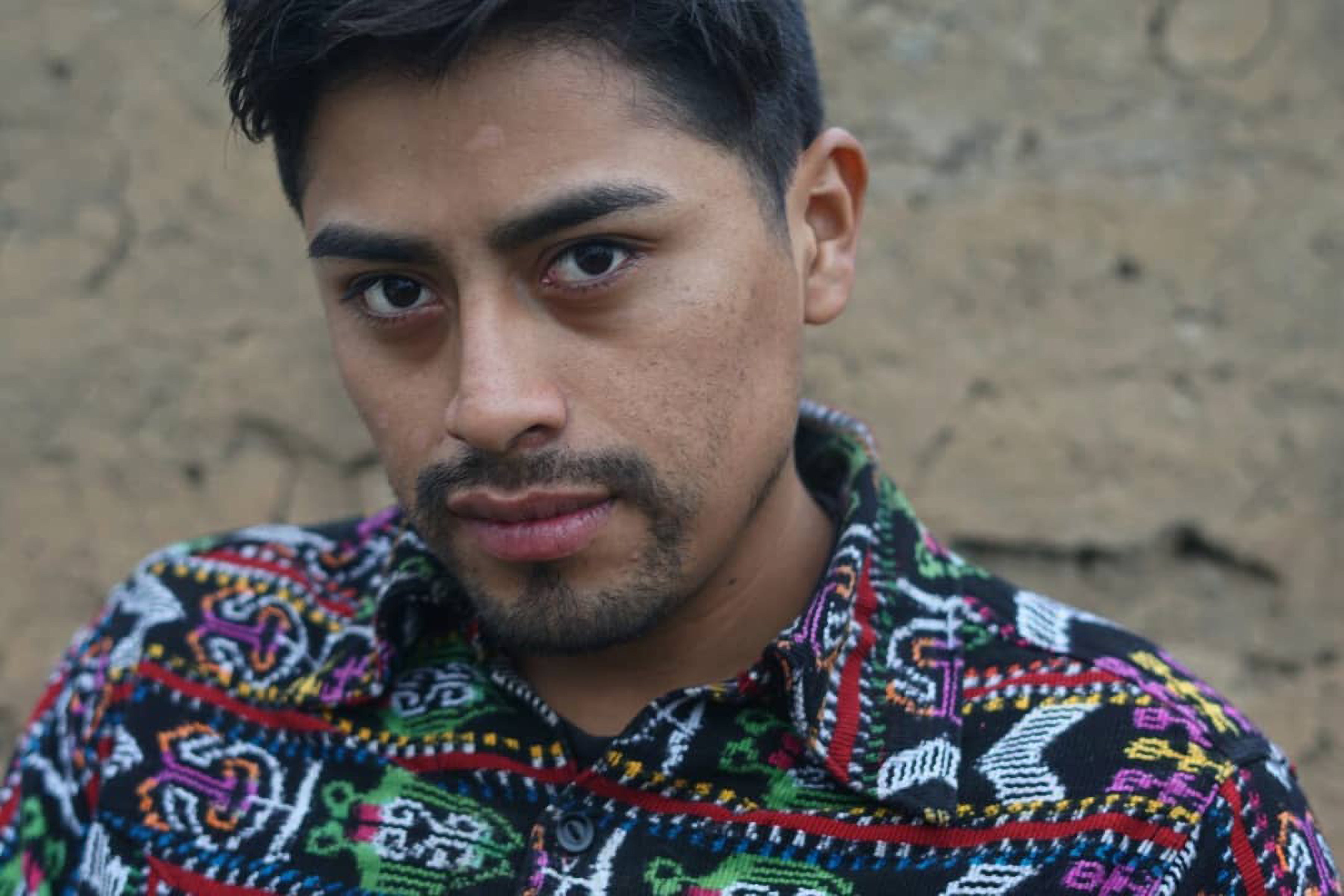 Cultural Survival: How do you feel playing the ball game? Why do you think it is important for the youth to get involved?

Enrique Salanic: I feel empowered. Playing Pitz is a privilege. There is a lack of support from the authorities and there is also a lack of involvement from the youth, however, new teams are coming together. We feel like our team has inspired others to make their own groups. [Playing] it is a way in which you can learn our history. Usually we only hear about what happened after colonization, not about what was happening prior.


CS: How does the Maya ball game influence your spirituality and your cultural connection?

ES: It is a complement which fills a gap. It reinforces my spirituality, being able to feel the energy of the others prior, during, and after the games. It makes me be more sensitive to the point where I can be aware of the energy of the ball itself. Among our group, we share research we have conducted on archaeology or epigraphy. There are some members that are more interested in certain themes and look for workshops or spaces to deepen their knowledge. The game makes me more inquisitive and makes me dig through history. What we do is not a replica of what happened in the past, but it does connect to many practices that were done before and we need to be aware about them.


CS: How does the ball game influence your mental and physical state? Is it an extreme sport?

ES: Mentally, it has to do with spirituality. There is 100 percent concentration. If you aren’t fully concentrated you can get hit by the ball or you can lose your focus. There are moments that require sexual abstinence. It is a great challenge for youth to manage and exercise their mental energy. On the physical side it is very demanding. The game is basically doing intense sit ups for 15 minute rounds, which is what a round might last during a game. You need to exercise each week, parts of the body that aren’t usually used like the hip, arm, and knee. Up to a certain point I would say, yes [it is an extreme sport], due to the fact that somebody can die if they are hit too harshly by the ball in the head, vertebrae, stomach, or other part of their body.


CS: Are there adversities to playing the game? What makes you keep playing it?

ES: There are adversities. There are people who are very religious and when they see us practice they want us to leave or they organize among themselves to kick us out of the places where we practice. I feel this is very closely related to racism. People ask us why we practice it, they say it is a thing of the past. They tell us that it is better that we do not do it or to do it in another place. Also there are people that feel it is a bad influence for their kids to practice the ball game. These are some of the downsides. What keeps me going is our team. We have the same conviction and we are clear on what we have begun, and these convictions make us push on. 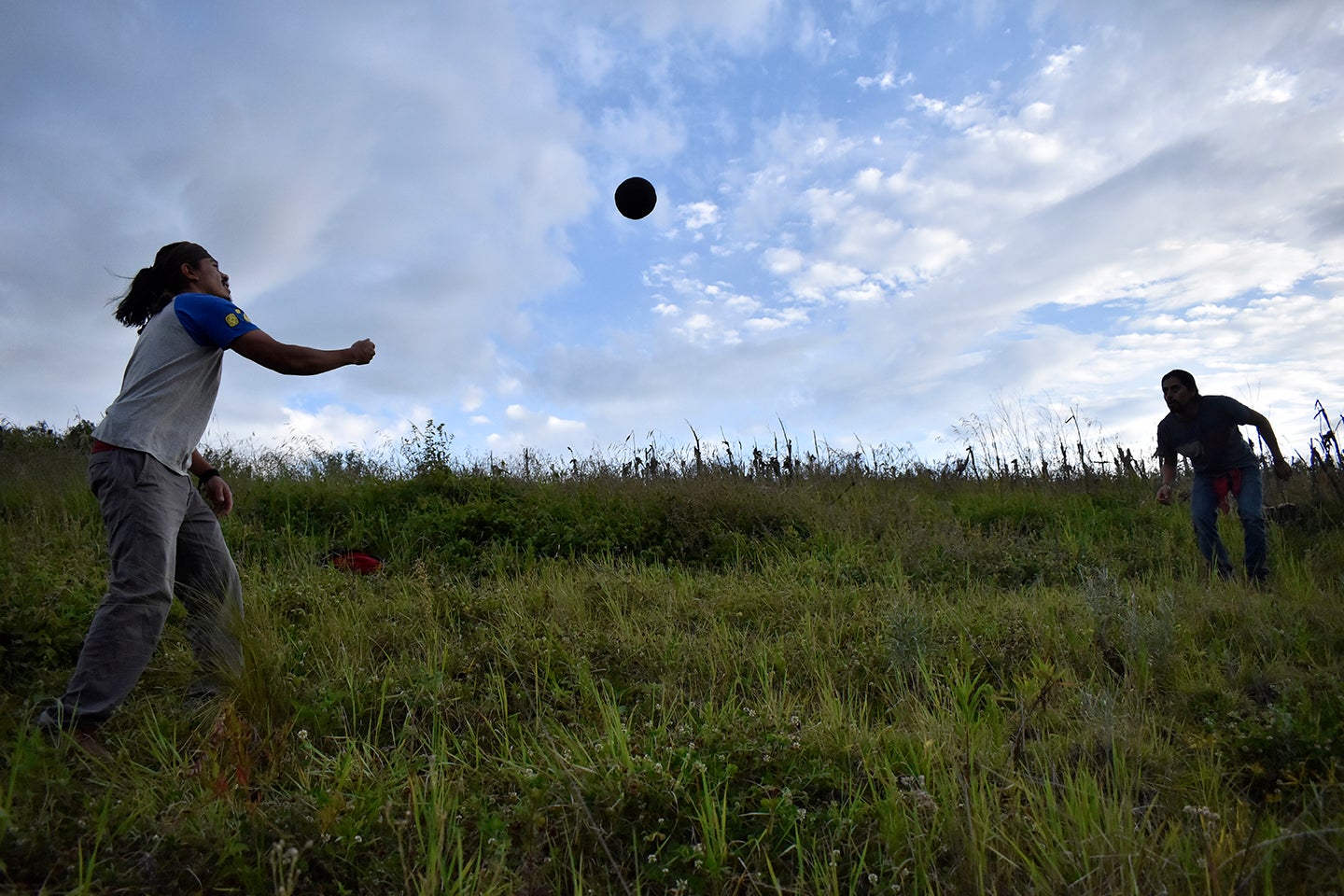 In the Maya ball game, the ball is put in motion by action of the right hip, the right elbow, or the right knee and is not permitted to touch the ground. Daniel Sosa and Enrique Salanic at a training on top of Chui Jolom Dueño Hill, Totonicapan, Guatemala. Photo by Cat Monzón.

CS: How do you see yourself in relation to the game in 10 years?

ES: I want to keep being a part of the team and playing all my life, or at least as long as my body allows me to do it. We have a teammate who is an architect and he knows that the Pitz is a part of his life. He may not be able to practice it all the time, but whenever he can, he plays. For all the members of the team it is like that; we practice on our own and whenever we can we meet to play together. Our team is made up of people who do not live in the same town or city.


CS: How would you like to see the ball game develop in the future?

ES: I wish to see more teams. We do not demand that they practice the Maya cosmovision 100 percent, but at least that they know what playing this game implies, since it is a ceremonial game. I would love for it to be as famous as soccer, which is very popular. This sport is able to create consciousness at a physical and mental level. It also makes you curious of what happened when this game was played by our ancestors. This is something that I like a lot. You get to do your research and learn new things. For example, why did the game die? Why did we stop playing it? How was it practiced before? and so on. I think the youth will be interested in it because it is physically demanding and you can lure them in with that. However, you have to be conscious, because some people only practice it as a sport and do not complement it with the spiritual part. But I understand this cannot be imposed on others.

Top photo: The Maya ball game is having a resurgence in Guatemala. Enrique Salanic hitting the rubber ball with his hip at an early morning training. The ball in the sky resembles the sun. Photo by Cat Monzón.