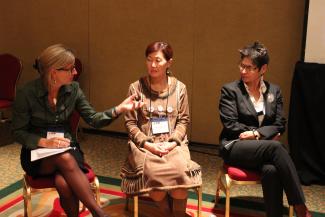 Indigenous reciprocity is much more complex than a two-way exchange of favors…while the word reciprocity is not used often in our daily lives, it is deeply embedded in most Indigenous cultures. Where reciprocity remains strong in many respects, we must acknowledge that in other respects the serious erosion of our worldview has consequently caused damage to our systems of reciprocity. But we continue to have strong philosophical continuity.

Reciprocity, the practice of exchanging with others for mutual benefit, is the basis for relationships in many Indigenous communities and was the buzzword characterizing the International Funders for Indigenous Peoples (IFIP) World Summit on Indigenous Philanthropy. The summit took place September 24–26 in New York City, dovetailing with the UN World Conference on Indigenous Peoples, the UN Climate Summit, and the People’s Climate March. It brought together funders, NGOs, and Indigenous leaders to foster a deeper understanding of Indigenous philanthropy by allowing them to create relationships without the constraint of the funder-recipient dynamic, working as equal partners.

Conference speakers provided a closer look at philanthropy and reciprocity as it operates in Indigenous communities. One panel considered the role of youth in continuing the work of philanthropic leaders in their communities and the necessity of educating them for the future. Neydi Juracan Morales (Kaqchiquel Maya), a youth leader from the Comite Campesina del Altiplano, shared that “young Indigenous women in many communities experience discrimination four times: one for being a woman, two for being Indigenous, three for being young, and four for being a leader.” Morales spoke of the struggle to bridge the generational gap between her elders and her peers, more so to prove to her family that being a woman should not limit her work in advancing the political and social movements in her community. “Women are a vital resource to Indigenous communities because we know what our families need. Women play a huge role in maintaining the household; it only makes sense that we have a vote in decisions,” she said.

Conference participants were encouraged to ask questions and actively participate in the discussions in order to gain broader perspectives. One such question asked how Indigenous funders are incorporating the concept of reciprocity within their respective organizations. Mirna Cunningham, a Miskita leader and activist on the Reimagining Resources, Reciprocity, and Relationship in Grantmaking panel said, “Our concept of reciprocity is a concept of sharing…so our vision at FIMI [Foro Internacional de Mujeres Indigenas] is that we provide the funds and the various groups provide their traditional knowledge. That’s how it works, we share and we exchange.” The panel discussed the funders’ responsibility to view Indigenous philanthropy as mutually beneficial. As Cunningham expressed, the idea is that each side provides their resources to bring about sustainable and culturally sensitive change.

“In traditional Indigenous communities you are aware of what your neighbor has; that is, we know if he has one or two camels. That is how we know what they need in hard times. But the modern economy makes us put our money in the bank where we don’t see it. How then do we know what we have and don’t have? We can’t share that way,” said Dr. Hussein Isack from the Kivulini Heritage Trust.

Participants repeatedly underscored the idea that protecting the environment protects resources for all, including future generations—and that this is the highest form of reciprocity. “Remember that water is our first food, and that food is water. We must conserve our land and our water at the same time,” said Melissa Nelson of The Cultural Conservancy during the Food Sovereignty, Indigenous People, and the Future of Agriculture: a Global Strategy panel. Sustainable land use was also a recurring theme. “Now that we control over 40,000 hectares (150 square miles), the challenge is how to manage it without destroying it. We can’t just continue with the colonial way,” said Abdon Nababan of the Indigenous Peoples Alliance of the Archipelago.

Change must happen at several levels for reciprocity to blossom; changing the culture of funding is essential and needs to respect the way Indigenous communities operate. Tauli-Corpuz explained, “Some donors want to see big impact in very little time, but it doesn’t work that way. It took 25 years to draft and pass the UN declaration, so it takes that long.” Sandra Macias del Villar of the Global Fund for Children offered a donor’s perspective, saying that funders too often restrict what the community wants to do. She argued that communities need flexible funding, money that can be spent on anything from transportation to meetings to Internet access. “Too many funders fund short term for just a year or two. That is just not enough time to accomplish anything,” she said.

Reflecting on the event as a whole, Atama Katama, conference panelist and nonprofit leader, commented, “I feel that the summit is very important to not just Indigenous people, but for funders themselves to know more about the new level of working with Indigenous Peoples, especially after the outcome document of the world conference. In the same way, we Indigenous Peoples who are empowered by the process of the world conference now have in mind, can think about, can strengthen the passion to work with philanthropists who are here today.”

The recipient of the 2014 IFIP Award for Indigenous Grantmaking went to the JR McKenzie Trust. Founded in 1940, it is one of the oldest organizations in New Zealand that supports the well being and development of the Maori people. This is the first time an award was given to a foundation that has appointed Maori tribal and community leaders on its Board to share in the decision making. Executive Director Evelyn Arce said, “JR McKenzie Trust is a model for the future of Indigenous philanthropy which places community leaders at the center of the decision making process.”