Perspectives of an Iñupiaq Elder: Continuity and Change Above the Arctic Circle 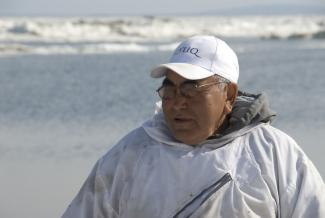 For the Iñupiaq people of Alaska, as with many Indigenous groups, subsistence is a crucial avenue for passing on cultural knowledge, sustaining economic livelihood, feeding the population, and constituting the local diet. Among the Iñupiaq, subsistence-based livelihood is neither a dwindling practice nor a “traditional relic” relegated to only a few members of the older generations.

In fact, far from it: the practice is vividly alive among the Iñupiaq residents of the Northwest Arctic Borough, one of two tribal administrative regions in Alaska above the Arctic Circle. To wit: the Alaska Natives Commission reports an estimate of over 1,000 pounds per person of subsistence harvest for the Northwest Arctic Borough—more than double the per capita subsistence harvest for its arctic neighbors in the North Slope Borough, and over 200 pounds more than the second highest per person harvest in the state.

While subsistence culture endures among the Iñupiaq of the Northwest Arctic, the dual forces of technology—most notably the advent of snow machine-based transportation, which arrived two generations ago—and more recently, climate change, have dramatically altered some of these practices. There are few Iñupiaq left who have witnessed these dramatic changes of the past half-century; John Goodwin, Iñupiaq elder, marine mammal hunter, and chairman of the Federal Ice Seal Committee, is one of them. As part of an oral life history project, he relates his 50-plus years of experience as a subsistence harvester in the northwest Arctic.

Born to Hunt and Fish
Goodwin was born at a winter seasonal camp between the Northwest Arctic communities of Kotzebue and Noatak in December 1942 and spent most of his childhood in Kotzebue. He has a lifetime of experience hunting and fishing, having joined his grandfather on expeditions as a child: “I started with grandpa at age nine, hunting bearded seals in spring time. My main chore was to bail the boat, and I was learning hunting from grandpa.

“Our culture, we as men, we as boys, were taught by our grandpas and our uncles and friends more than our fathers. Traditionally, we were taught hunting by our grandparents and uncles because we are more apt to listen to them than our [fathers]. Dad had a real influence in teaching me how to hunt, but I went out all the time with my uncles and grandpa. My uncles would fight over me cause I was a good cook and not lazy.”

Game for All Seasons
Subsistence harvesting is a way of life embedded in the seasons, which means that even in a region as extreme as the Arctic, it is a year-round occupation. Goodwin recalls, “Hunting and fishing has been my livelihood, every season I have reason to hunt something. In spring, beluga and seal; summer, salmon,
trout, fish; in winter, caribou, rabbit, ptarmigan, wolf, and fox. There was lots of seal hunting in spring by dog team, ringed seal. On land, we would hunt caribou all year long. [We] had to get firewood and ice with dog teams. We would go seal hunting after freeze-up in winter.”

Dog Power to Horsepower
The amount of time and effort placed on subsistence, along with the migrations of Iñupiaq families, were shaped in large part by the Iñupiaqs’ reliance on dog teams for transportation. “In February, March, and April [we would] fish for sheefish in Kobuk Lake for dog food and for ourselves. Got to feed dogs, we were always hunting and fishing for [the] dogs. You had to learn how to cook, feed dogs, chop wood. My family would move to spring seal hunting camp May to June, July. We went to Sisualik, Cape Blossom, Sadie Creek, Sealing Point. August is settling time after spring, we start to gather, put fish to shade.”

The advent of snow machines in the 1970s brought drastic changes to the Kotzebue way of life; the new technology meant that more resources could be gathered more quickly. But as Goodwin sees it, marine mammals have not adapted to modern technology. “Before and after western activities, behaviors of marine mammals haven’t changed. Outboard [motors] didn’t bother them, kayaks come right up to them. The difference is speed: [it] will take only a couple of hours [to hunt] with snow machine. With dog teams, it takes longer.”

On Thinning Ice
Beyond the transition from dog power to horsepower, kayaks to outboard motors, Goodwin has experienced the deep impacts of climate change in his region. He recalls that his forebears were witnesses as well: “Grandpa and grandma would tell stories how the ‘world is getting warmer and warmer.’ Back then, when it would get into the 20s, that was a heatwave. When I was growing up 40 below was nothing.”

The thickness of the ice along Kotzebue Sound has influenced the migration patterns of subsistence species, such as bearded seals (ugruk). “Ice is not as thick as it used to be. Ugruk are always looking for good ice to lay on. This is a migration area as they go north to find ice, so if no ice here, then they keep going. Some years we have no ugruk.” Other conditions, such as snowfall, have also changed. “When I was a young kid we had lots of snow, almost as tall as Rotman’s building (a two-story grocery store on the Kotzebue Sound). We hardly have snow anymore.”

The Road Ahead
Goodwin has witnessed these changes as a subsistence harvester, but he also observes them as a researcher helping to guide biological and cultural studies in the Northwest Arctic. He is currently working on a subsistence mapping project with the Northwest Arctic Borough as a specialist in traditional knowledge, helping to translate interviews with experienced subsistence hunters and fishers across the region into the Iñupiaq language. The project, which documents generalized harvesting areas and travel routes, is creating both a historical record and a modern catalogue of subsistence information to help ensure that the community’s traditions live on.