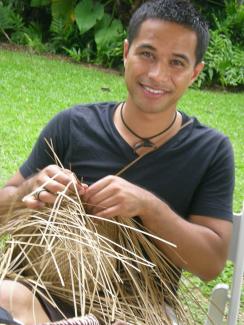 For thousands of years after its emergence from the Pacific Ocean, Hawai’i’s Native inhabitants enjoyed its tropical isolation. The Native Hawaiians developed a distinct society, elaborately weaving together obligation, ritual, and reverence for the Earth. Following the “discovery” of the islands by British explorer James Cook in 1778, Hawai’i became engulfed by sadness and destruction. After more than a century of colonization, a movement for Hawaiian independence took place. But plans for an autonomous Hawai’i were squashed when the United States annexed the islands in 1898. Despite centuries of dispossession, Native Hawaiians continue to honor and pass down their traditions to new generations. Confronting seemingly unwavering forces of globalization, modern cultural practitioners maintain tradition by acknowledging the past, present, and future. One of these practitioners, Pi’iali’i Lawson, has helped his culture reach new audiences on the mainland.

Operating out of the Kaululehua Hawaiian Cultural Center in South San Francisco, Lawson is an ambassador of traditional Hawaiian cultural practice. When he moved to California from the Big Island of Hawai’i to continue his own education, Lawson aspired to also educate others about Native Hawaiian culture, particularly Lauhala weaving. “Lauhala is a regular practice of our people,” he says, explaining that weavers make hats, baskets, containers, and sails for the canoes, as well as personal adornments.

Originally from the island of ‘Oahu, Lawson comes from a multi-generational line of Hawaiian Lauhala weaving practitioners. “The craft was passed down through many generations. The last recorded weaver in my family was Kaoulionalani Pahi'o, my great-great-great-grandmother, who lived in the early 1900s and has had great influence on my work,” he says.  Lawson began his training ten years ago, receiving one-on-one lessons from his grand-uncle Kia Fronda and aunts Pualani Muraki and Debbie Toko on the island of Hawai'i who are considered to be Kumu or teachers of Lauhala weaving. He says he owes much gratitude to them for being his source of knowledge and for continuing to be his main teachers. He has also learned from a number of notable teachers like Pohaku Kaho'ohanohano, Marcia Omura, Phillip Ng, and Lynn Ham Young. Lawson is also affiliated with Ka Ulu Lauhala O Kona weaving organization in Kona, Hawaii and is a past recipient of the annual weaving conference scholarship.

Now on the mainland, Lawson continues the Lauhala tradition by teaching it to people of all ages, genders, class, and ethnic backgrounds. At the cultural center, he conducts beginner and intermediate Lauhala weaving workshops for members of the San Francisco Bay Area community. “I teach to all who are interested. I have taught Lauhala to people from all backgrounds and ages, to children as young as four years old and grandparents. Beginner weavers usually learn to make a basic traditional bracelet and then progress to more advanced items such as baskets,” he explains.

Lawson expresses an acute understanding of Hawaiian culture past and present. “Each workshop, I find it important to teach the history, background, and cultural significance of Lauhala weaving in which they learn traditional-styled items. It is essential to raise awareness about who we are and our histories as practitioners,” he says. Along with the connection of the past to the present, Lawson shows that Lauhala must also be future-oriented. “As a traditional art, Lauhala is meant to be shared and for the knowledge to be passed on to new generations just as it was passed to me.”

The diversity of styles and patterns that can be developed by Lauhala weavers reflects the adaptability and universal applicability of the craft. “Patterns created by the weaver often reflect their own realities,” Lawson says. “Sometimes the piece is made for a particular person using a specific design or it tells a story or represents something about our past, present, or future.” Along with running workshops, Lawson also creates and sells jewelry made in the Lauhala technique. “The jewelry I sell is modern-styled, incorporating the traditional weaving as an inlaid piece onto metal or leather. These are items that I do not teach, as they reflect my own reality as a modern Hawaiian also immersed in tradition. My goal is not to replace the traditional art but to highlight its beauty.”