Author
Fraser Macdonald
In eastern Nigeria, as in far too many places, wildlife conservation is taking place at the expense of indigenous peoples. The Ndola people are one of the groups that have been pushed out of their traditional homes to make way for a national park. Here's how they're coping. 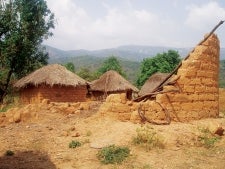 Because so many men have had to leave to find work, many of the buildings in Gidan Musa are not being maintained. Photo by Fraser MacdonaldOne day in 1969, the Ndola people of Ndombo Ngishi in Taraba State, eastern Nigeria, woke up to find government officials in the middle of their village telling them they had to leave their homes and find somewhere else to live. The forest in which they lived, said the officials, was to be turned into the Ngel Nyaki Forest Reserve, and no one was allowed to live in the forest any longer or use it in any way. The villagers were not given compensation and were not resettled to any particular site; they were simply expected to re-establish themselves elsewhere. Unfortunately, there was no “elsewhere” to settle, and the previously unified village split into five or six distinct hamlets. Although separated, these people continued to recognise themselves as belonging to the village of Ndombo Ngishi, as they still do today.

One of these groups, numbering around 30 or 40, established themselves at a site near the other settlements, yet still inside the boundaries of the reserve. They were able to remain there until the 1990s, when increased government surveillance led to another demand for them to leave their homes and find somewhere else to live, again without compensation. The majority of people from this small settlement went on to establish the hamlet of Gidan Musa, while a handful joined the other hamlets created by the first evictions. “We do not understand how this happened or why this had to happen,” said Nashuka Musa, a man from Gidan Musa. “How can they tell us to leave when it is our home?”

The people of Gidan Musa have been especially hard hit. They are socioeconomically marginalized, have become seriously malnourished, have had the social fabric of their communities torn apart, and have come close to being homeless. “You see this blind man?” said Chairman Musa, the headman of Gidan Musa. “You see that mango tree [pointing to the site from which they were evicted]? There used to be farms right over there and now there is nothing. How is a man like this going to manage? How are any of us going to manage? We have no place to farm; we have no employment; and no education for our children and their children.”

In the past, the people of Gidan Musa had plenty of land on which to farm, and they hunted, grew fruit, and collected wood and other plants inside the forest. Now, most people have to survive on tiny patches of very poor land: around 40 people have exclusive rights of access to only three or four parcels of low-quality land, each roughly 500 square feet. Chairman Musa, one of his wives, and his daughter farm the smaller two or three of these sections, while the remainder of the community uses the remaining, larger parcels land as well as land borrowed from neighbors. Dauda Panso, the headman of Tudun Haske, an Ndola hamlet next to Gidan Musa, said that before the 1990s their farms inside the reserve yielded 3,300 pounds of corn each year, but since being excluded they have been reduced to a hand-to-mouth existence. Storage of surplus crops at both places is a thing of the past, as is having anything extra to sell in the market. Chairman Musa told me that hunting for chimpanzee, monkey, and duiker, previously an important source of food and income, had also largely disappeared. People have been forbidden to fell trees inside the reserve, so they have to go to greater lengths to find materials to build their homes, and they are no longer allowed to collect any other forest products like fruit, honey, and natural medicines (though some people continue to do so in secret).

You can see this general downward economic slide in the appearance of the people of Gidan Musa as well as the state of the hamlet itself. Most people’s clothes are torn and ragged, their general demeanour downcast. I was talking with the chairman one day in the hamlet about his community’s experiences with conservation, and he told me that the clothes I now saw him dressed in were the same clothes he was wearing when he was evicted from the forest for a second time in the mid–1990s. Some huts in the village are in a state of disrepair, while all that remains of formerly important buildings is just a skeleton. Compared to other indigenous people living in the area, the people of Gidan Musa have been particularly badly affected by residential and economic displacement, mainly because after being evicted they had no spare land to fall back on as a substitute for what they lost.

The protection of the reserve has also upset traditional social institutions. One of the common Ndola institutions was something called Contribution. People would gather at a specially constructed communal shelter to collectively cook and eat food in a casual atmosphere. Satu Yana, an elderly woman from Gidan Musa, told me, “With Contribution everyone come together to cook and eat, and even if you did not have something you would still get food. People used to keep on into the night, and they would sing and dance, too. We loved to make this happen.”

Of course, this tradition only worked if there was surplus food. With people barred from the reserve, food production dramatically declined and people began to avoid participating in Contribution. Today it is rarely, if ever, practiced.

The people of Gidan Musa, like local people more generally, have also been psychologically affected by their exclusion from the reserve. They have lost the right to determine where and how they live, and they now feel demoralised and disempowered. “We feel like the government controls us and that we cannot make things better,” said Chairman Musa. “We think of the future and, since the government has not given us anything, now we think we will just suffer.”

“Even though they talk,” said Nashuka Musa, “their talk will not matter. What they say they will do they never do.”

To survive, many local people, including those from Gidan Musa, have migrated away. There is a marked absence of working-age men in the village, as most of them have gone to other villages looking for jobs. Other people have coped by taking work as farmers and gardeners with better-off neighbors or with the mainly pastoralist Fulani. These workers receive either a cash wage or a percentage of the food harvested off the land they work on. The people of Gidan Musa depend considerably on this sort of employment, as do the former forest-dwellers in other hamlets. Ndola from Tudun Haske work for their Ndola neighbors from the village of Lumu Batu year-round, while on the other side of the reserve, the Mambilla and Tigon people of the village of Maiwuya work for their Fulani neighbors for up to 10 months a year (they claim under exploitative conditions).

The Ndola have adapted to these impacts in various ways. People living at Gidan Musa have come to rely heavily on the fruit, oil, and wine derived from the oil-palm tree for a significant proportion of their income. Of these products, the one that carries the most importance is the wine made from palm sap, which is collected by the men of the settlement three times a day. The wine’s status comes not only from its economic value (nearly all of the palm wine sold in local markets comes from Gidan Musa), but also from its perceived social benefits. Other local people depend on selling fruits (avocado, banana, mango), using their donkeys to transport corn for clients, or selling cattle that they can no longer afford to keep.

The protection of the Ngel Nyaki Forest Reserve, especially since the 1990s, has helped wildlife conservation, but it clearly has failed the indigenous peoples who live in its vicinity and who depended on the reserve’s resources to survive. It is by now a familiar question: is it necessary to remove and exclude indigenous people from their traditional lands in the name of conserving a unique ecosystem? There is no right answer for all scenario, but only different solutions to different problems. At one end of the spectrum, if local people are seriously degrading an area of high ecological value, then of course it is necessary to prevent that—the people themselves are threatened by that situation. At the other end, if the richness of plants and animals inside a protected area is the cumulative product of centuries of human use and occupation, then it would make little sense to completely stop local people from using it.

The historic use of the Ngel Nyaki Forest Reserve by local indigenous peoples falls closer to the latter end of this continuum. The environment that the government and environmental NGOs now protect is not a static entity but a dynamic ecosystem that has been shaped by culture as well as by nature. Centuries of human activity have contributed to the reserve’s form and function. This is not to say that the local use of the reserve has been without its ecological impacts. Amongst other things, hunting reduced the populations of some rare animals; farming reduced the area of forest and degraded soil and water; and cattle grazing has been responsible for erosion and landslides that have tragically killed people. These are serious problems, but are they serious enough to warrant the total exclusion of local people from the area?

And there are longer-term consequences to this sort of plan. As Thomas McShane, a program officer at the World Wide Fund for Nature, says, there now exists “a park surrounded by people who were excluded from the planning of the area, do not understand its purposes, derive little or no benefit from the money poured into its creation, and hence do not support its existence.” This is the sort of situation that leads to poaching and violence.

Keeping local people out is the wrong solution to the sticky problem of ensuring the long-term survival of the reserve. Ameliorating the problem (I have doubts as to whether problems like this can ever truly be resolved) lies firstly in putting some trust in local people and not treating them as ecologically dangerous objects. They are not creatures bent on destroying their natural environment, but human beings who depend on natural resources in the most primary of ways. They have the largest vested interest in the forest’s health.

A conservation strategy needs to be put in place that sensitively addresses, and can flexibly adjust to, this fundamental relationship between local people and their natural environment—perhaps helping the people to find sustainable ways of pursuing their traditional livelihoods. Some degree of restriction seems unavoidable, but complete exclusion not appropriate. Local livelihoods need protection just as much as the biodiversity within the Ngel Nyaki Forest Reserve.

Fraser Macdonald has recently submitted his Master of Arts thesis in social anthropology, which he studied for at the University of Canterbury in New Zealand. For his PhD he hopes to conduct research in Papua New Guinea.