Our Voices on the Air: Reaching New Audiences through Indigenous Radio 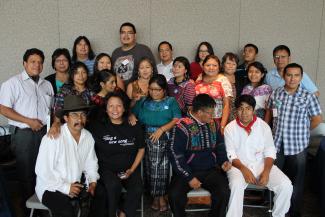 A rising hum of Mayan, Euchee, Lakota, Maori, Mixtec, Spanish, English, and myriad other diverse languages, followed by moments of calm during an opening
prayer, signaled the start of a three-day language revitalization and radio conference on the top floor of the Smithsonian’s National Museum of Natural History in Washington, DC. Thirty Indigenous language teachers, speakers, and learners who work or volunteer as radio producers gathered from Canada, Colombia, El Salvador, Guatemala, Mexico, New Zealand, Peru, and the United States to share their experiences working to revitalize their endangered languages via radio, online, classroom, and community engagement programming.

Survival is the treasured goal for all of us.” — Our Voices on the Air Participant, 2012

After a warm welcome from Dr. Eva Pell, Smithsonian undersecretary for science, sessions convened with a focus on expanding the use of radio and web-based platforms to maintain and revitalize Indigenous languages as rich local repositories of ceremony, spirituality, song, and biodiversity in local environments, and as complex indicators of social change within Indigenous cultures. The conference brought together scholars in language revitalization, specialists in Indigenous
media, language advocates and teachers, and Indigenous radio producers from around the world.

Olga Mercedes Ajcalon said, “Before coming to this conference, I had thought that it was only Indigenous people in Guatemala who [were] struggling to maintain our culture and language. Here I am surrounded by Indigenous brothers and sisters from many places that are facing the same challenges that we do back home—and many are succeeding. It is very inspiring and I will take these lessons back to my people.”

Longtime radio producer Maria Martín, a member of the conference organizing committee and director of the Gracias Vida Center for Media in Antigua, Guatemala, reminded attendees that 65 percent of the world’s population doesn’t use the Internet regularly, while radios are on daily from the most rural areas to the densest urban centers. “In the next few days, let’s think creatively and strategically about how we can help, support, and learn from each other,” she suggested.

“Our language is the number one source of our soul, our pride, our being, our strength, and our identity.”
— Indigenous language instructor, Cultural Survival Quarterly, 2010

Researchers predict that the vast majority of the world’s estimated 6,000 to 7,000 languages may disappear by the end of the 21st Century. Indigenous Peoples, who are the speakers of the majority of these languages, face an onslaught of discriminatory policies and socio-economic pressures to replace their tribal languages with more dominant tongues such as English, Hindi, Mandarin, and Spanish. Within Indigenous languages is embedded tribal wisdom encompassing cultural values, spiritual practices, and knowledge of environmental change accumulated through long-term interactions with local homelands and resources; in losing a language, the world loses part of its collective cultural diversity and a priceless record of local biodiversity.

Saving and revitalizing languages means teaching them to the next generations. Radio is an ideal educational medium, as for many Indigenous communities around the world it is the most accessible form of information sharing. It is also relatively easy to create the necessary infrastructure for a community-based, volunteer-run radio station.

Cross-Cultural Exchanges
Cultural Survival’s Community Radio and Endangered Languages program joined forces with the Smithsonian Institution’s Recovering Voices initiative to facilitate endangered language revitalization by connecting international Indigenous communities that are producing and expanding radio programming in local languages. “Our Voices on the Air: Reaching New Audiences Through Indigenous Radio” involved the Smithsonian partner organizations the National Museum
of Natural History, the National Museum of the American Indian, and the Center for Folklife and Cultural Heritage, and was sponsored by the Consortia for World Cultures and Understanding the American Experience.

Radio producers, linguists, and advocates from many tribal and mainstream communities shared examples of specific resources, legal challenges, and other wide-ranging experiences gained from broadcasting, teaching, and organizing in their communities. Media professionals from around the world also brought their expertise to the discussion. Through workshops, presentations, screenings, and comparative discussion sessions, producers developed new material—and inspiration—to enrich their community radio programming at home.

Oscar Pérez, Central American and El Salvador representative to the World Association of Community Broadcasters, summed up the stark contrast between the challenges faced by US-based tribal communities and their disenfranchised Indigenous counterparts in the global south: “We work for the existence of a legal framework that recognizes Indigenous radio because people are imprisoned and persecuted for doing community radio,” he said.

Bill Siemering, now of Developing Radio Partners, is a giant in community radio who helped frame National Public Radio’s original mission and founded NPR’s All Things Considered. In discussing the importance of “peer-sharing,” Simering said, “The thing we all share is the love of radio and the passion for this wonderful, personal, intimate medium that not only brings information to people…but [also] holds public officials accountable.” He presented brief case studies of community radio as an educational tool utilized by tribal and pastoral communities from Tanzania, Mozambique, Mongolia, and Macedonia. “Few social movements have a broader reach that affects more people than having an engaging community radio station,” he said.

Looking Forward
Through Cultural Survival’s language and radio programs, along with our Smithsonian Institution partners, we intend to continue collaborating with local Indigenous radio producers to expand on the stories and recordings from the conference in order to develop an international radio series for broadcast to a wide community and public radio audience. The series will tell the story of the endangerment of the world’s languages, the importance of revitalizing these languages, and the crucial role that community radio programming can play in revitalizing Indigenous languages as a catalyst for social justice. Cultural Survival hopes that the conference will bring us closer to our organizational objectives of establishing international networks of Indigenous community radio stations and language revitalization programs.

To learn more about the “Our Voices on the Air” conference, to join the conversation on our blog, and to listen to programs produced by participants, visit: www.cs.org/our-voices-on-the-air