Our Existence Is Resistance 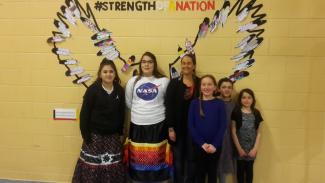 Anishinaabe Aki is our home territory as Anishinaabe people. Anishinaabe includes Ojibway, Odawa, and Potawatomi peoples. It also includes Oji-Cree, Mississauga, and Nipissing peoples. Our home territory is colonially known as Michigan, northern Wisconsin, Minnesota, Ontario, parts of North Dakota, and parts of Manitoba, Canada. Through colonization and the fur trade we have an additional unique identity in our territory: Métis people are a group of Indigenous people who are federally recognized in Canada but not the United States. This identity is unique to the Great Lakes because of the French and Anishinaabe relationships. My ancestry is Ojibway, Métis, Nippising, and Huron. Our Métis ancestry has been mixing since the late 1700s on Mooniingwanekaaning-minis (Madeline Island, Wisconsin). Not everyone can identify as Métis as it is unique to the Great Lakes and specific settlements such as Red River in Manitoba. Understanding Métis ancestry is key to understanding and moving forward and centering Native people in racial justice work.

To do racial justice work in Anishinaabe Aki is to acknowledge Métis ancestry and how colonization has impacted our people for a very long time; this is what decolonial community work is about. So often in racial justice work,  First Nations, Native, and Métis people are left at the margins. Racial justice is more than looking at race through a Black and White lens. This is a colonial concept that is racist against our people, who span every skin tone, eye color, and hair color. There is no one look to Native people. When you are mixed race, you are no longer one race. Blood quantum is a tool of genocide, yet Tribal governments continue to adhere to strict blood quantum standards that were put in place by the U.S. government. These standards are not the way of our people. Our way is about family and community, not what a colonial structure dictates.

The Black and White racial binary defines only Blacks and Whites as key players in the pursuit for racial justice. This binary produces and promotes the exclusion of Native American and Métis people, and is harmful for the healing of our people across Turtle Island (North America). It is important to move beyond the great harm of the Black and White racial binary in racial justice work. In my work to bring racial justice to northern Michigan and our Anishinaabe communities, I have been disappointed. We are frequently made to be invisible, and when we bring up the harsh realities we face, we tend to be ignored, discredited, or silenced. In racial justice work we are made to be even more invisible—we can use the term “invisible minority” to describe this harsh reality.

If racial justice work fails to address colonization, then the status quo of settler colonialism and violent occupation, and by extension the racial binary, is maintained. The Black/White paradigm both defines and limits the set of problems when talking about race and racism. The United States is obsessed with this binary to maintain settler colonialism. Ignoring the lives and voices of Native people is purposeful erasure in the form of statistical genocide in documentation, media, academia, and elsewhere. Excluding our identity and only listing a few races is not “inclusion;” it is common not to be listed and included.

What you won’t hear in the mainstream media is that colonization never ended. If it had, we could properly address historical and generational trauma in our individual lives, families, and communities. Instead we continue to deal with racism, stereotypes, and discrimination from the majority culture in addition to the issues plaguing our own communities, such as youth suicide and physical, sexual, and substance abuse. We have experienced incredible losses of land and culture that isn’t validated by the majority culture. We are supposed to be thankful for the little bit of land we now have, called reservations. Empowering our people and healing our communities in the face of these great injustices is critical. However, strengthening our communities is not enough when structural racism and oppression exist.

It is beyond time to change the narrative around racial justice and the work that needs to be done. Decolonization is more than a hashtag: it is work. The Native Justice Coalition, along with other non-profit organizations in Michigan, hosted the inaugural Anishinaabe Racial Justice Conference in the Keweenaw Bay Indian Community on April 13-15, 2018. Other organizations working in collaboration with the conference included Michigan Roundtable for Diversity and Inclusion, Northern Michigan University Center for Native American Studies, Michigan Technological University, Showing up for Racial Justice Keweenaw Chapter, and the Keweenaw Bay Indian Community. Thirty-two speakers and panelists addressed more than two hundred participants on topics ranging from environmental racism, mascots, youth voices in racial justice, and storytelling in Anishinaabe culture. “Being in the room with such fierce and honest Indigenous leaders, presenting truth and power, was affirming in the most soulful way. It felt easy like the laughter of family reunited after many lost generations,” said Michelle Martinez (Lipan Apache of Texas & Latina Mestiza).

As a form of decolonization, the conference broke free from the standard Western format, by which the Native Justice Coalition elected to not have a keynote speaker and instead weighed the voices of each attendee equally. In Anishinaabe culture, ogemaag (leaders) do not make decisions for their community without a full consensus. “I loved experiencing our people coming together for racial justice, our youth seeing positive representation of Indigenous people working for a better future. We usually come together for powwows, but this meeting brought us together for justice. The protest is happening at home, and we are a movement,” said Kristy Phillips (Bodewadmi ndependages/Potawatomi Nation).

The conference was also unique in its attention to harm reduction, healing, sobriety, and recovery. Four Thunders Drum of the Keweenaw Bay Indian Community, a sober drum group in the community, and Anishinaabe singers and songwriters shared their music in relation to recovery and healing. “I was honored to partake in such a significant event. An array of topics was presented addressing issues that Native people face today. It was a wonderful opportunity to network with professionals of various backgrounds and have a sharing of ideas to take back to our communities,” said Linda R. Cobe (Lac Vieux Desert Band of Lake Superior Chippewa).

To make deep, meaningful, and lasting change, the burden shouldn’t be on Native people alone to address racism. We need to address racial justice with the support of all settlers, whether White or people of color. If our people are centered in this work, then our lives and communities are strengthened. All daily actions are critical in the face of this tremendous burden we have to bear as Native people. The frontlines are our lives. Our existence is resistance. When we heal, when we choose sobriety, when we speak, when we rise, we are resisting. This is how we reclaim what was rightfully ours and build the beauty of our culture back into our lives.

—Cecelia Rose LaPointe (Ojibway/Métis) is owner of Red Circle Consulting and Waub Ajijaak Press. She is a Two-Spirit author, poet, and writer. For more info: www.anishinaabekwe.com.