Is An Optional Protocol Required In Relation To The UN Declaration On The Rights Of Indigenous Peoples? 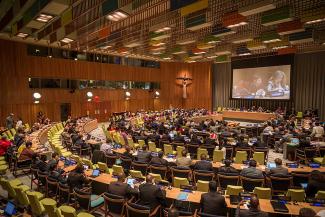 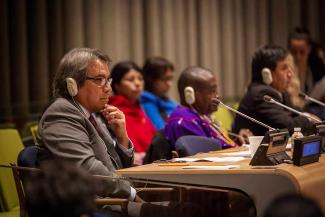 The following is an abridged version of Professor S. James Anaya’s paper submitted for the UN Permanent Forum on Indigenous Issues Expert Group Meeting Dialogue on an optional protocol to the United Nations Declaration on the Rights of Indigenous Peoples, which took place January 27–29, 2015. The meeting discussed whether a new mechanism should be created to address the implementation gap in the Declaration

Is there an implementation gap?

It can hardly be debated that there exists on a global scale a wide gap between the standards expressed in the UN Declara- tion on the Rights of Indigenous Peoples and their implemen- tation. In most cases, the infringement of Indigenous Peoples’ rights and the absence of adequate protection for those rights are systemic within the States in which they live. Adoption of the Declaration highlighted the need for legal and policy reforms at domestic and international levels in order for the conditions of Indigenous Peoples to be brought into line with that now-achieved consensus about their rights. The Declaration requires that States not just subscribe to the articu- lated rights, but ensure and establish a domestic legal order in which the rights are respected, protected, and fulfilled.

In my work during two terms as the UN Human Rights Council’s Special Rapporteur on the Rights of Indigenous Peoples, I was confronted by many instances of infringements of Indigenous Peoples’ rights particularly in relation to lands and resources, and especially in the context of extractive in- dustries. A persistent problem was the absence of domestic legal protections for those rights and, in many cases, legislation and regulatory practices inconsistent with those rights. In my last report to the General Assembly, I expressed fear “that the wide gap between the rights mentioned in the Declaration and its effective implementation will persist, leading to a certain complacency and acceptance of that condition by dominant actors and within the United Nations system,” and emphatically cautioned, “this cannot be allowed to happen.”

The insufficiency of existing mechanisms

Despite important advances made by the existing mechanisms in raising awareness about Indigenous Peoples’ concerns, providing guidance on how to address those concerns, and setting important precedents, the implementation gap has persisted. Existing capacities within the international human rights system are insufficient. It must be asked whether the best way to address this insufficiency is to create an altogether new mechanism, or if the objectives behind the proposal for an optional protocol can better be met by strengthening and expanding upon the capacities of existing mechanisms. Any consideration of an optional protocol must be joined with the discussion of an expanded mandate for the Expert Mechanism on the Rights of Indigenous Peoples.

The limitations of a new complaint procedure

The proposal for an optional protocol focuses on the creation of a new procedure to receive and adjudicate complaints of alleged breaches of Indigenous Peoples’ rights, in particular rights to lands and resources. I am skeptical of the utility of yet another complaint mechanism unless it is devised to have features of engagement with States, Indigenous Peoples, and others significantly beyond those of existing complaint procedures. A deficiency of existing procedures is that they are optional or limited to the States that have ratified the relevant treaties; the proposed optional protocol relating to the Declaration will be similarly limited. During my two terms as Special Rapporteur, I communicated with governments, Indigenous Peoples, and others in examining and reporting on dozens of cases. I issued detailed observations and recommendations, and in several I conducted site visits specifically to investigate the complaints—most involving violations of rights over lands and resources. This work was constrained by the limited support resources available to me, a problem that is common to all existing international human rights mechanisms.

It may be argued that a new complaint mechanism under an optional protocol that is specifically linked to the Declaration would have greater relevant expertise and authority to address Indigenous issues than existing procedures. Further, the new mechanism, which would presumably be constituted by a collegial body of experts rather than a single individual, would have greater resources at its disposal and its decision would carry more weight as compared to the Special Rapporteur. I find some merit in these arguments. Still, the problem of limited resources for the effective functioning of existing mechanisms is not remedied by the creation of a new one. Moreover, even if adequately resourced, a new complaint mechanism may provide limited added value to the existing system of complaint mechanisms. This is because a new complaint procedure, with the features of formality typically associated with the denomination of optional protocol, would likely tend toward the same “rights ritualism” that has limited the utility of existing international human rights complaint procedures. The idea of rights ritualism refers to formal processes in which States willingly engage and by which they are able to espouse formal adherence to human rights norms without effective local implementation of the norms.

As Special Rapporteur I was witness to, and enabled, a good deal of rights ritualism. I would transmit the allegations of rights violations in an official letter to the government concerned, laying out the details of the allegations and the relevant provisions of the Declaration and other applicable instruments. In most cases the government would reply through a formal diplomatic note, often with detailed information laying out its version of the facts and human rights responsibilities, but rarely admitting any wrong- doing or committing to doing anything different. Through such exchanges governments were able to portray cooperation with the Human Rights Council’s system of special procedures while usually avoiding immediate substantive changes in behavior. I became increasingly conscious of such rights ritualism and tried to overcome it by the use of multiple avenues of engagement beyond formal procedures.

Setting forth my inquiries, observations, and recommendations in formal documents were an essential component of engagement. However, advancing compliance with international standards in particular cases was most effective when I went outside of formal exchanges and engaged informally with State officials in a problem solving, cooperative manner, especially when I was able to engage local actors. International complaint procedures provide avenues for victims of human rights abuses to be heard, with the possibility

of at least a moral victory that itself can have significant restorative effects. Favorable decisions can be an important factor, although rarely a singular one, in actually bringing about change, as Indigenous Peoples have experienced on a number of occasions. But experience has shown that something more than what a formal international complaint procedure can offer is required to genuinely enhance international capacities to effectively advance implementation of the Declaration.

In order to bridge the implementation gap, any international mechanism must ultimately have some measure of influence on domestic authorities. The question is how is that influence best achieved. The limitations of formal international complaint procedures are related to the structure of the broader system of international law, policy, and institutions, which strongly favors local decision making on local matters. To be effective in advancing implementation of the Declaration, international mechanisms must catalyze local dynamics toward local acceptance and application of those standards.

In my view, what is needed is a robust program of awareness- raising about Indigenous Peoples and their rights aimed at the relevant government officials and the general public, along with an effective and well-resourced program of technical advisory services. The latter should be established with the expertise and capacity of engagement to assist governments and Indigenous Peoples with the development of needed regulatory reforms and remedies for rights violations, consultations over those reforms, and other matters relevant to the effective realization of Indigenous Peoples’ rights. Some elements of these programs could be developed within existing international mechanisms and agencies, or it may be that an entirely new mechanism would best facilitate the development of such initiatives. I will leave that complex discussion to another day.

— S. James Anaya is a Regents Professor and the James J. Lenoir Professor of Human Rights Law and Policy at the University of Arizona James E. Rogers College of Law. From 2008–2014 he was the UN Special Rapporteur on the Rights of Indigenous Peoples.

Image One: Many heads of states and government representatives took part in the UN World Conference on Indigenous Peoples affirming their commitment to Indigenous Peoples; however, implementation of rights needed on the local level.
Image Two: Professor S. James Anaya