No Longer Business as Usual: The Financial Case for Respecting Indigenous Rights 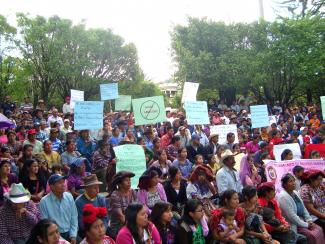 The cost of doing “business as usual” with Indigenous Peoples has a new spin in a recent report published by First Peoples Worldwide. The Indigenous Rights Risk Report: How Violating Indigenous Peoples’ Rights Increases Industry Risks finds that US extractive companies expose shareholders to tangible risks by neglecting the rights of the nation’s Indigenous Peoples.

The report analyzes 370 oil, gas, and mining sites operated by 52 US-based companies on or near Indigenous land. Among the many eye-opening conclusions: 89 percent of these sites were found to pose a medium to high risk to shareholders and investors, and only 5 of the 52 companies have specific policies to guide them in positively engaging Indigenous Peoples. The report also quantifies many of the social risks posed by extractive industries, which, due to the difficulty of proving such grievances, had previously been difficult to evaluate.

“The pushback on evaluating social risks, at least as far as the conventional wisdom goes, is that there are no quantitative metrics,” said Rebecca Adamson, founder of First Peoples Worldwide and co-author of the report. “Social risks are considered to be ‘intangibles,’ a word the market uses to ignore whatever it does not want to have to deal with, such as the environment. However, like the environment, we are seeing much more public pressure for corporations to be responsible for their footprints. The funny thing about ‘intangibles’ is how much attention they are getting in the market nowadays.”

Now that attention is being granted to some of these issues, the next step is to incentivize companies to implement policy that recognizes these risks. The report states that “Indigenous Peoples are securing unprecedented recognition of their rights from governments . . . but these impressive legal gains are matched with chronic gaps in implementation, especially as they relate to resource extraction.” One of these gaps is the failure of many extraction companies to formally observe the land and human rights of Indigenous Peoples. Adamson believes that these injustices can be addressed by holding companies accountable not only morally, but also economically.

“If you have bad credit you pay a higher interest rate. This is how the market works. So the idea behind the Risk Report is to quantify the risk companies encounter when they violate Free, Prior and Informed Consent and tie it to their cost of capital. That way a company that consistently violates Indigenous rights will be rated riskier than one that upholds our rights, and therefore it will have to pay higher financing costs,” Adamson explained.

The risk ratings are intended to incentivize companies to take action in a way that local, national, and international governmental bodies have not. The hope is that the report will speak to for-profit companies in a language they respond to: market value. “I don’t have much faith in either the national or international political leadership,” said Adamson. “Many countries are not implementing the Declaration, courts are slow to rule, and often rulings get ignored. [But] the activists are raising awareness and public pressure is mounting. Social media has helped catapult the issue into national and international attention. But the end game for corporations is still about keeping your stock price up, and there is no incentive to change yet. Using market mechanisms is a crucial void this report intends to fill.”

The report states that action is currently taken to address social risks only if tangible, negative consequences arise. The report also finds that this reactive, fire alarm method of regulation is beneficial to neither party: “In the absence of market incentives for proactively addressing social risks, companies are not prompted to do so until things go wrong, and social risks become social costs.”

The Indigenous Rights Risk Report strives to evaluate these risks both quantitatively and with respect to the most pressing human rights issues affecting Indigenous people. Examining 52 oil, gas, and mining companies listed on the Russell 1000 Index (an index that represents the 1,000 largest publicly held companies in the US), First Peoples Worldwide identified projects directly impacting Indigenous Peoples’ lands or rights. From there, they used five risk indicators (Country Risk, Reputation Risk, Community Risk, Legal Risk, and Risk Management) to rate each company from low to high risk, indicated on a scale of 1 to 5.

Of the 330 projects assessed for risks associated with operating country, company reputation, engagement of Indigenous community, legal action, and risk management, 35 percent of those projects were rated high risk exposure and 54 percent medium risk exposure. The majority of companies were found to not be exhibiting adequate efforts to establish positive relationships with Indigenous communities. A full 92 percent of companies surveyed did not address community relations or human rights at the board level in any formal capacity.

Companies such as Alpha Natural Resources and Southwestern Energy were given risk scores of 100 percent, while companies with risk scores of 50 percent included big names such as Chevron Corporation and Murphy Oil. Adamson said she hopes that the report will garner the attention of some of these corporations, which rely on intangible assets such as intellectual property, human and social capital, reputation and goodwill, and risk management in the valuation assessment of their stock.

The purpose of the report, Adamson explained, is to link corporate accountability to Indigenous social costs such as overburdened roads and utilities, increased crime, housing shortages, and polluted waters. “In the case of Indigenous social concerns, there will be cultural practices, sacred sites, subsistence livelihoods—all crucial elements of the social costs we face when corporations come into our territories with or without our consent. By identifying and quantifying these impacts, Indigenous Peoples are better informed to make decisions and set development agendas on their own terms and corporations are better equipped to listen to those terms.”

Along with exposing the worst offenders, the report also uncovered corporations taking positive steps towards increasing corporate social awareness. Conoco Philips, Exxon Mobil, Freeport-McMoRan, and Newport Mining all have board committees with community relations or human rights in their mandates. Exxon Mobil additionally has an active, independent external body to advise and evaluate its community relations and human rights performance. Such progress, while incremental, is a step in the right direction.

Adamson believes that with a more unified front, true change could be realized in the relationship between Indigenous people and extractive industries. “Indigenous Peoples have the potential to set a major portion of the extractive industries agenda, but we have to be so much more united and organized,” she said. The data collected for the report found approximately 30 percent of current production coming from Indigenous lands, and up to 60 percent of future reserves located on Indigenous lands. “This is huge,” Adamson said. “If we were more united, we could harness the market forces and make sure it is no longer business as usual. United we could be sure we are all heard in the corporate boardroom, whether the answer is ‘no’ to development or whether it is ‘yes.’ Indigenous Peoples would be the ones determining the relationship they want to have with corporations.”

Image: In Barillas, Guatemala, communities protest the construction of a hydroelectric dam. Photo by Danielle DeLuca.