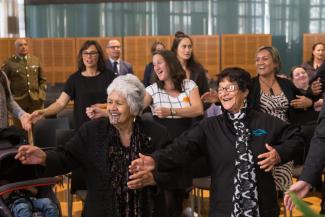 The Ngāti Rangi, led by the Ngāti Rangi Trust (NRT), have been making headlines recently as they forge a new agreement with the New Zealand government regarding historical grievances over land use and land administration. These agreements restore, in part, Ngāti Rangi’s ability to protect and nurture the health of New Zealand’s rivers and lakes as central to Māori culture. On March 15, 2017, after two years of negotiations, Ngāti Rangi and the Crown signed an Agreement in Principle (AIP), an important step toward reaching a settlement over claims regarding the 1840 Treaty of Waitangi. These developments have overlapped with the NRT’s partnership with Genesis Energy, a relationship that emphasizes the role of ecologically and culturally sustainable considerations in energy production and has allowed for four rivers previously diverted to aqueducts to be released back to their natural paths.

Considered the founding document of New Zealand as a nation, the Treaty of Waitangi was signed by many, but not all, Māori chiefs and the British Crown in 1840, and declared British sovereignty over New Zealand. The Treaty recognized Māori ownership over their lands and gave them the rights of British subjects, and in return the Māori gave the Queen the sole right to purchase and govern land. The treaty was meant as a sort of partnership between the Māori and British monarchy, but because it was drafted in English and translated into Māori by a missionary, the two versions varied enough that each party had different understandings and expectations of the treaty’s meaning.

Since its signing, there have been breaches to the treaty, particularly regarding land claims; the Māori have held many meetings to debate treaty issues. In the 1970s and ‘80s, Māori protests began drawing attention to the treaty and their mistreatment by the New Zealand government. The Treaty of Waitangi Act of 1975 established the Waitangi Tribunal to hear claims and grievances of Tribes that the treaty had been breached and to receive recommendations, but in practice the Tribunal had little social or political influence. Ngāti Rangi lodged its claims with the Waitangi Tribunal in 1992 and got its time in court from 2006-2008. Finally, in 2015, the Ngāti Rangi and the Crown began negotiating to settle historic claims pertaining to the treaty.

The settlement process includes seven distinct steps: Deed of Mandate, terms of negotiation, start negotiations, Agreement in Principle, further negotiations, Deed of Settlement, and Settlement in Legislation. The Ngāti Rangi explained in a statement that the AIP “proposes a settlement which includes the Crown’s acknowledgement of numerous breaches of the Treaty of Waitangi, an agreed historical account and an apology from the Crown for those breaches.” Though signing the AIP is an important step forward, it is only a third of the seven part process. As Che Wilson, lead negotiator for the Ngāti Rangi Trust and former Cultural Survival board member, said following the signing, “We are on the right path, but there is still much work to be done.”

Central components of the AIP include the return of several cultural properties and the promise of developing a new governance and management framework for the Whangaehu River catchment. The Whangaehu River is a sulfuric river and is one of only a few rivers of its type in the world. The terms in the AIP set “a great opportunity for us to establish a new governance and management framework for our awa,” Wilson explains. “We’ll be getting an increased management and governance of lands and sites cared for currently by the Department of Conservation that will also include an interim seat on the Tongariro Taupo Conservancy Board. We also get the right to buy back the Karioi Forest. It’s an opportunity for us to transfer and lease back several Crown properties as well as the right to acquire further properties in the future.”

Recently, Ngāti Rangi and energy giant Genesis Energy have partnered to find a way forward to acknowledge customary rights and still leave room for power generation. For decades the NRT have fought against the implementation of the Tongariro Power Scheme, ling suit and appealing decisions permitting the project to proceed. According to the NRT website, the continued diversion of ancestral waterways out of their catchments and away from NRT territory, or rohe, and the eastern diversion of the Tongariro Power Scheme, “denies us the ability and responsibility to protect, nurture and uphold the awa ora (health and wellbeing of the river).” The partnership between the Iwi and Genesis Energy is a step forward for Indigenous Peoples seeking to protect their ancestral lands. The “renewed and rejuvenated health” of the Tokiāhuru is even more promising.

The Tongariro Power Scheme (TPS) is a large water collection scheme to generate power for use throughout New Zealand. It consists of four main parts: the Eastern and Western Diversions, and Tongariro and Rotoaria sections. The Eastern Diversion consists of the Wahianoa Aqueduct, which diverts 26 waterways and includes the Tokiāhuru, Wahianoa, Mākāhikatoa, and Tomowai, four waterways of great importance to Ngāti Rangi. These waterways, which are considered the “life veins from Mount Ruapehu as they descend from the maunga to join with the principal river of the Tribe, Whangaehu,” had been dry for decades. The Tokiahuru was dry for about six kilometers below the Wahianoa Aqueduct before the recent agreement to allow them ow to the sea once again.

In 2001, when Genesis gained a renewed resource consent for continued operation of the TPS, Ngāti Rangi appealed the decision. Three years later the Environmental Court ruled in favor of the NRT, reducing the consent period from 35 to 10 years. Genesis appealed this ruling, and in 2006 the High Court ruled in favor of the corporation. In 2010, a er NRT planned to appeal to the Supreme Court, NRT and Genesis met outside of court and agreed to form a good faith relation- ship agreement. The agreement ended the costly court process, and Genesis senior management agreed to stay at Tirorangi Marae Tribal village and explore the area with NRT to better understand the impacts of the TPS on the surrounding communities.

In 2012, the first changes were implemented and “connected flows” from three awa were released to rejoin their source to the sea. Over the course of the next few years, the two groups began to conduct research to determine a culturally and environmentally acceptable ow to release down the Tokiāhuru, and in 2016 one such ow was permanently released. “Not that many years ago it seemed like we were in legal battles in an environment court situation,” says Jarrod Bowler, renewable energy manager at Genesis Energy. “Now we’ve been able to step beyond that and actually work constructively together, almost hand in hand, in terms of understanding what opportunities exist within these rivers.”

Genesis invited Gail Tipa of the research firm Tipa and Associates to work with Ngāti Rangi and learn about their customs and relationship with the land and waterways. They also invited scientists to study the ecosystems to assess the health of the species inhabiting the area. The information collected through these assessments will be passed on to other members of the Iwi. “It’s really wonderful to actually be here and hear the water and her voice in the background singing to us,” Tipa says. “For some of the uncles and aunties, that’s their first time here, sitting here, and it still looks as though it’s not enough.”

The partnership between Genesis and the NRT is an important step forward for Indigenous Peoples to protect their lands and resources. Wilson says, “We respect the fact that sometimes the discussions are hard and here we’ve signed things for us to get a connected flow, an agreed flow, but those discussions will still be had.”