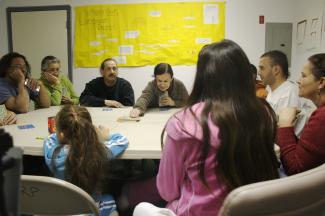 "Indigenous Peoples have the right to establish and control their educational systems and institutions providing education in their own languages, in a manner appropriate to their cultural methods of teaching and learning." -- United Nations Declaration on the Rights of Indigenous Peoples, Article 14.

Native Americans lost control of their children’s education over a century ago, when the United States government began forcibly enrolling Native students in residential schools. This policy, which was carried out on a large scale through the 1970s, was designed to assimilate Native children into an “American” mold. In these institutions, children were severely punished both physically and psychologically for using their heritage languages instead of English. These painful experiences convinced entire generations of Native people that their children would be better off learning to speak only English. Hoping to spare their children the same suffering, parents stopped passing their languages on to their children. As a result, numerous languages indigenous to America are now in danger of losing their last native speakers.

Today many communities want to revitalize their languages, but they face the formidable obstacle of raising a generation that will speak their heritage language as their first language. As Native Americans have yet to regain control of their children’s education, young Native people continue to attend English-only schools and to be assimilated into mainstream society, all the while losing knowledge about their tribal heritage. Scott Russell, secretary of Apsáalooke (Crow) Nation, put it this way: “We’re educating all our students to be non-Native right now.” Viewed in this light, it seems that not much has changed since the days of the residential schools.

In the last 20 years, United States government policy has undergone significant changes. In 1990, Congress passed the first iteration of the Native American Languages Act, which recognizes that “the status of the cultures and languages of Native Americans is unique and the United States has the responsibility to act together with Native Americans to ensure [their] survival.” This legislation promised a great deal to Native communities, declaring that it would now be the official policy of the United States to “preserve, protect, and promote” Native Americans’ rights to use their indigenous languages anywhere, including “as a medium of instruction” in schools.

Congress updated the Act in 1992 with the inclusion of a grant program to “assist Native Americans in assuring the survival and continuing vitality of their languages.” This was an essential addendum, since no funding had previously been allocated to achieve the Act’s directives. The amount allocated by this amendment was not nearly sufficient to finance programming for all interested tribes. Immersion schools are costly to establish, especially when the target language is not thriving and the curriculum must be developed from scratch. Consequently, inadequate government support has forced many schools to devote the much of their energy to private fundraising.

Additional funding was made available through the Esther Martinez Native American Languages Preservation Act of 2006. Named after a woman who taught and documented the Tewa language, this act created funding for “language nests,” where preschool children learn their heritage language by interacting with fluent community elders; survival schools and immersion camps, both of which aim to create fluency through immersion; master-apprentice programs which also use immersion environments to develop fluency; curricular development and teacher training; and language classes for the parents of students enrolled in language programs. These programs are important because they aim not just to teach language, but to create fluent speakers. Equally essential is the flexibility they provide, since different communities must be allowed to develop the language-learning arrangement that will best suit their specific resources and goals. Simply teaching an indigenous language for one class period per day cannot accomplish fluency, nor can dictionaries and audio recordings. Only immersion can effectively create fluent speakers; only fluent speakers can revive an endangered language.

But as undeniably valuable and beneficial as these programs are, they face myriad setbacks. In addition to the chronic lack of funding, numerous restrictions were imposed by the No Child Left Behind Act of 2001. Although No Child Left Behind claims to respect the right of Native communities to incorporate their own language and culture into their children’s education, many of its mandates directly contradict those laid out in the Native languages act and impede the success of immersion schools.

One major problem is the definition of “highly qualified” teachers: as required by No Child Left Behind, teachers must have a bachelor’s degree, full state licensure, and provable knowledge of their subject matter. This hampers immersion programs, because often the only available speakers are the community’s elders—and most of them don’t possess teaching credentials or university degrees in their native languages. However, they are the last fluent speakers, and therefore the most qualified teachers. Both the Native American Languages Act and the Esther Martinez Act state that teachers of Native American languages may be exempt from certain requirements in order not to “hinder the employment of qualified teachers who teach in Native American languages,” but schools have difficulty getting state authorities to accept these exemptions. There are few alternatives, since endangered languages are defined by the fact that they have a limited number of fluent speakers.

In addition to prohibitively restrictive teacher qualifications, No Child Left Behind requires assessment testing—which is tied to federal funding—to be conducted entirely in English. This is difficult for immersion schools, which often operate on a model of beginning education completely in the target language and gradually introducing English to students later. By the end of their schooling—and by virtue of living in an English-speaking society—students achieve fluency in both their Native language and English (called “additive bilingualism”), though students may initially lag a bit behind in English. However, No Child Left Behind doesn’t recognize these distinctions. President Obama’s Blueprint for Reform of the Elementary and Secondary Education Act pledges that tribal authorities will have “greater flexibility to use funds to carry out programs that meet the needs of Indian students.” Whether or not the Blueprint will deliver on its promises remains to be seen.

Also problematic are the struggles of Native American students in traditional public school settings; Native students have a dropout rate of roughly twice the national average. Estimates vary widely but suggest that only half of all Native American students complete high school, and barely one-fifth progress to any post-secondary education. Although academic assessment scores are rising slowly for all demographics, the achievement gap between Native and white students continues to widen.

According to the 2011 National Indian Education Study survey of school administrators, one-quarter of students in public schools with low Native enrollment receive Native language instruction, while one-half of students in high Native enrollment public schools do. Students in Bureau of Indian Education-run schools are ostensibly much better off, as around 90 percent reportedly receive at least some oral instruction in a Native language while 70 percent receive some written instruction. However, this instruction tends to be infrequent: in 2009, barely one-quarter of students in Bureau-run schools reported that people in their schools talked to each other in Native American languages every day, while the numbers for public school students were so small as to be negligible. These low rates of regular Native language use are not nearly sufficient to create fluent speakers.

The news is not all bad, however. Within this dark landscape, immersion schools appear to represent a beacon of hope. Many Native students are thriving in these settings, achieving higher test scores and graduation rates as well as demonstrating stronger connections to their culture. For example, virtually all students in Native Hawaiian schools now graduate from high school, and their language programs have expanded so greatly that students can go through university completely in Native Hawaiian. Diné (Navajo) immersion students are also scoring at or above the levels of their non-immersion peers on standardized tests, even in English. And at Waadookodaading, an Ojibwe language school in Wisconsin, one hour of English instruction per day has proven to be enough for students to reach “proficient” and “above proficiency” performance levels on No Child Left Behind assessments. The school says it “turned [the] model on its head” by teaching English—not Ojibwe—as the foreign language, and to great success.

Immersion programs offer substantial proof of positive outcomes for students, advancing both the academic success and cultural literacy of Native children and their communities. As Teresa McCarty, an Arizona State University professor and co-director of the university’s Center for Indian Education, writes, “The issue...is not whether schooling based on Native students’ tribal language and culture is beneficial, but rather which approaches are most effective and under what conditions.” Tribes must be allowed the control and flexibility to establish language programs and create an environment that can have such a positive impact on the community. Jacob Manatowa-Bailey, director of the Sac and Fox Nation of Oklahoma’s Sauk Language Department, sums up the heart of the issue: “Simply stated, when tribal children are given the opportunity to learn their language, they are happier, healthier human beings. It doesn’t mean their lives are easier. It does mean that their identities are stronger and that they are better prepared to face the challenges of being an Indigenous person in the modern world.”

--Kelsey Klug is an intern at Cultural Survival.