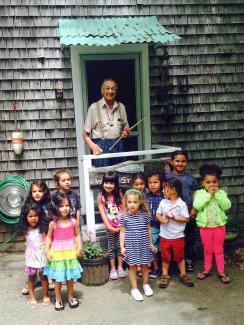 Bright sunlight streams through a bank of windows, illuminating a circle of 23 preschool and kindergarten children holding hands. Having just finished reciting the days of the month and discussing the day’s weather and season—all in Wôpanâak (Wampanoag) language—the students giggle and sway slightly, then become still as the older students, 4- and 5-year-olds, launch into a lengthy morning address reaffirming Tribal values and homelands and giving thanks for their ancestors. Wide-eyed 2- and 3-year-olds watch intently as their venerated teachers and peers effortlessly recite a complicated list of commands exhorting the tiny school community to “Be respectful! Be honest! Be compassionate! Be humble! Be brave! and Be grateful!” Next door, Mukayuhsak Weekuw’s (The Children’s House) inaugural cohort of first grade students makes tobacco offerings and prays with their teacher. In forthcoming academic years, students will be encouraged to stay at the immersion school through fourth grade.

Each weekday since Mukayuhsak Weekuw’s launch in September 2016, teachers and students from four Wampanoag Tribes in southeastern Massachusetts have met together at this private immersion school on Cape Cod—marking the first time the Wôpanâak language has been used to educate Tribal children for the majority of the learning day in more than four centuries. Located in the town of Mashpee, the school is a point of pride for citizens of all member Tribes of the Wôpanâak Language Reclamation Project: the Assonet, Aquinnah, Herring Pond, and especially the Mashpee Wampanoag, who have generously donated beautiful classroom space and facilities support for school operations. Students arrive each morning to loving Wôpanâak language greetings from a team of Montessori-trained educators, and after sharing prayer together, they launch into an intensive work session spanning nearly three hours. Lessons across the two classrooms’ curriculum areas are given primarily in Wôpanâak language, and even children who arrive with little or no knowledge of Wôpanâak soon develop a strong comprehension of basic concepts and commands.

“Watching this project development over the years has been like seeing your dreams unfold before your eyes. The success of Mukayuhsak Weekuw has given me a profound sense of peace in knowing that our future generations will have the one thing that I was lacking as a Wampanoag child— the irreplaceable connection between our Native language and our culture,” says Dawn Blake Souza (Assonet Band Wampanoag), a recent board member and grandmother and great-grandmother of a few of the students in the program. 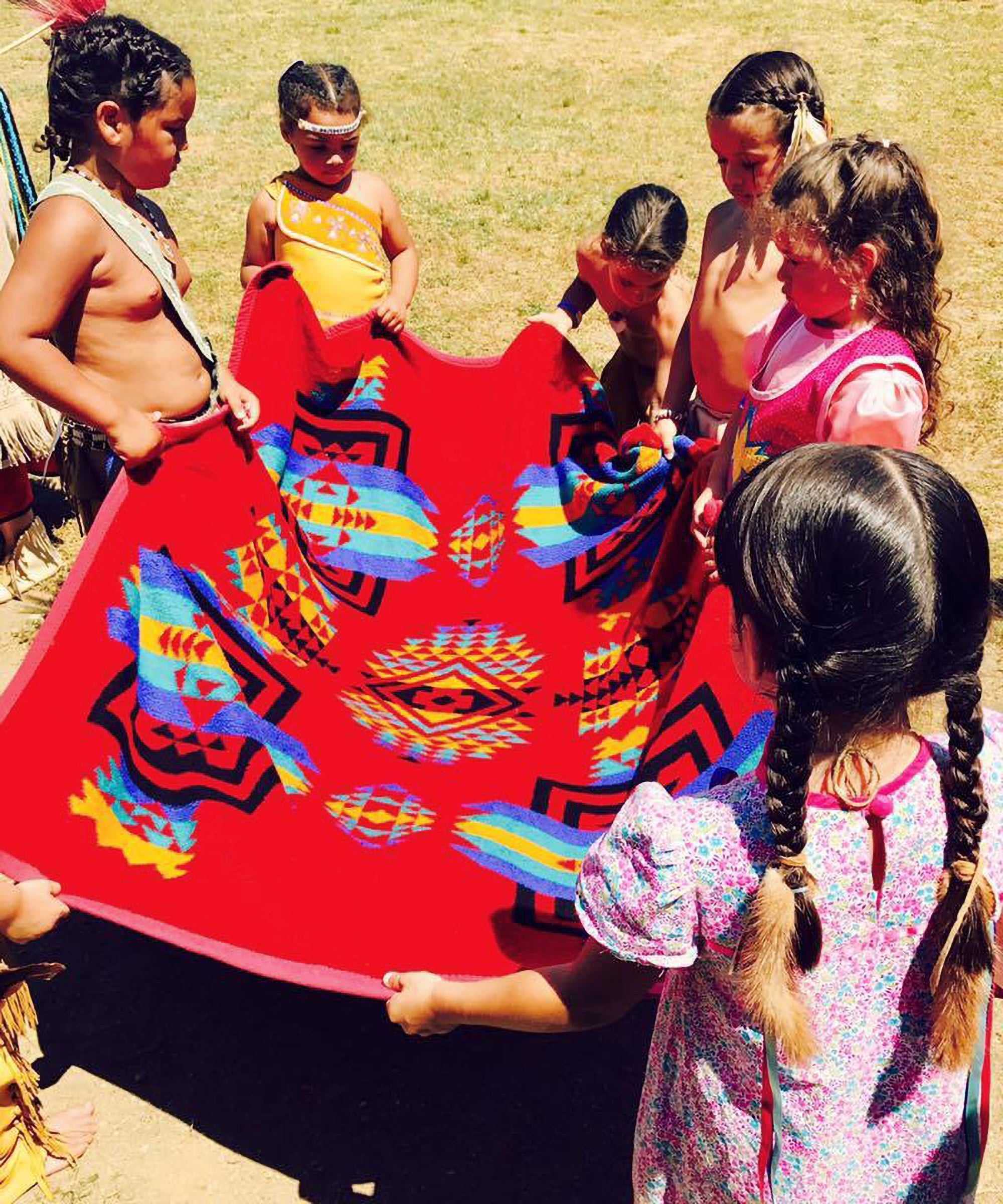 Wôpanâôt8âôk (Wampanoag Language) is one of more than three dozen languages belonging to the Algonquian language family. Through the processes of colonization, forced religious conversion, laws against the use of the language, and mainstream education, the Wampanoag language ceased to be spoken around the time period of the mid-19th century. There were no fluent speakers of the language for six generations, over 150 years. With a goal to revive the language, the Wôpanâak Language Reclamation Project began in 1993 under the direction of jessie ‘little doe’ baird (Mashpee Wampanoag), who earned a master’s degree in Algonquian Linguistics from MIT in 2000. Now, Wôpanâak is the first American Indian language to be reclaimed with no living speakers for many generations. “Our language is what keeps us connected to our ancestors, people, land, Creator, and all of our relations. Without language we are not a Tribe or Nation. It’s important to pass our knowledge and teachings down to our youth for future generations of Wampanoags to come,” says Brian Moskwetah Weeden (Mashpee Wampanoag), the Language Project’s board vice president.

The Wôpanâak Language Reclamation Project operates Mukayuhsak Weekuw, a full-time Montessori language immersion school, for 25 children from preschool through first grade, with plans to add additional grade levels in subsequent years until the students reach grade 4. The Project also offers weekly school-based programming in the public elementary schools, and daily World Language Credit bearing courses at the local middle and high school for grades 8–12. Community and elders language classes are also held weekly in Mashpee, and in several other communities throughout the year, including Aquinnah, New Bedford, and Quincy, MA. The school operates according to core practices based in Tribal values and elicited from Tribal elders, medicine people, clan mothers, and community leaders through focus groups and survey series. Deep gratitude and respect for Wampanoag ancestors’ courage and perseverance here in Tribal homelands lie at the heart of our language community, and we give thanks daily together through a recitation called Our Affirmations.

The cultural practices encompassed in these affirmations guide our teaching, our community relationships, and our leadership at the Language Project’s immersion school. All language programming is centered around ceremony and prayer, with a focus on enhancing community wellness, developing cultural resilience, and strengthening Wôpanâak identity through traditional cultural practices. Our population of language students grows annually, and over its 25-year history, the Language Project has provided free language education to more than 1,000 among the 4,200 citizens of the four Tribes who govern our work. Throughout 2018, we have instructed 20 preschool students, 55 elementary (K-6) students, 15 high school students, 80 elders, and 65 community members. We employ seven full-time language teachers and work with three linguists as contractors, and an additional three teachers certified by the Language Project volunteer to offer community language classes.

The ongoing survival of the revived Wôpanâak language depends in part on the future success of Mukayuhsak Weekuw students. The school empowers its students academically, and to persist in revering and protecting the same homelands that have sustained the Wampanoag Nation for the past 12,000 years. While the language lay dormant—or sleeping—for more than a century, today dedicated Wôpanâak language instructors lead students across four separate local schools in building proficiency and literacy. The teachers, in turn, are led in their own ongoing language journeys by the Language Project’s fluency coach, Nitana Hicks Greendeer (Mashpee Wampanoag), an educator who followed her mentor, baird, to MIT to study Algonquian linguistics. Greendeer went on to earn a doctoral degree in curriculum design and instruction from Boston College, and has been instrumental in framing the Language Project’s curricular approach of incorporating both Montessori pedagogy and Culture Based Education grounded in Wampanoag cultural practices and local landscapes.

Wampanoag linguists like Greendeer, baird, and baird’s daughter, Tracy Kelley, now herself a linguistics graduate student at MIT, along with Tribal leaders, are supporting a resurgence of bilingualism for Tribal families in part through sustaining and expanding Mukayuhsak Weekuw as a private, inter-Tribally operated school. But Mukayuhsak Weekuw is just one of a host of revitalization efforts sponsored by the Wôpanâak Language Reclamation Project, including elders’ classes, family classes and immersion camps, language enrichment programming, after school classes for Mashpee’s two local elementary schools, and two World Language Creditbearing courses held daily at the Mashpee Middle and High Schools.

For the first time in centuries, Wôpanâak language usage across all generations of Tribal families is growing. “My heart soars when I listen to my 4-year-old grandson teach his older sister how to express concepts that she has missed out on while attending a traditional public school,” says Souza. “I also love to watch the interaction between my son and his young child as he blossoms into a strong, proud, Wampanoag, who is confident and comfortable in being himself.”

With Cultural Survival’s Keepers of the Earth Fund support, the Wôpanâak Language Reclamation Project will construct a mixed-use yurt structure in Mashpee to serve as a combined classroom, performance, and gathering space for the growing community of Wôpanâak language teachers, students, and families.

Learn more about the Wôpanâak Language Reclamation Project at wlrp.org.