The Moment Has Come for Us to Save Our Tlingit, Haida, and Tsimshian Languages 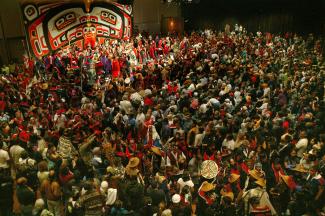 In 1980, the Sealaska Corporation brought together Tlingit, Haida, and Tsimshian Elders in Sitka, Alaska for a gathering of discourse, stories, and traditional songs and dances in the first Sealaska Elders Conference. During one evening, Charlie Joseph, Khaal.átk’, elder of the Kaagwaantaan clan, led traditional performances of Tlingit songs and dances—many of which, he told his peers, had not been seen or heard in many years. He asked his elder peers to have patience and forbearance for the young dancers as they were learning and could make mistakes. The elders ended up overwhelmingly embracing Joseph’s leadership. In thanking Joseph, William Johnson, Keewaaxh.awtseixh Ghuwakaan, said, “I ítnáxh ghunéi kghwa.áat. People will begin to follow your example.”

The people really did follow the example set by those elders at the Shee Atika Hotel in 1980, as the conference led to the creation of the Sealaska Heritage Foundation, later to be renamed the Sealaska Heritage Institute, with a mission to perpetuate and enhance Tlingit, Haida, and Tsimshian cultures. In 1982, following the example led by Joseph and other elders who were instructors in schools across southeast Alaska, the Institute created the biennial Celebration, a large gathering of Tlingit, Haida, and Tsimshian traditional singers and dancers. It has grown to host over 2,000 traditional dancers and as many as 4,000 visitors who take in all the festivities and rich culture.

However, as George Davis, Kichnáalxh, noted at the original conference, “Ch’a yéi gugénk’ áwé a kaaxh shukaylis’úxh haa tlagu khwáanx’i aadéi s khunoogu yé. We have uncovered only a tiny portion of the way our ancient people used to do things,” and “Tsu héidei shugaxhtootáan yá yaakhoosgé daakeit haa jeex’ a nakh has kawdik’éet’. We will again open this container of wisdom that has been left in our care.” Indeed, so much more of this “container of wisdom” was to be shared. The Institute’s Council of Traditional Scholars and Board of Trustees recognized that much of that deep knowledge of Tlingit culture and worldviews was embedded in the Tlingit language, and in 1997 they adopted language restoration as the Institute’s foremost priority. Revered Tlingit elder Walter Soboleff, for whom the Institute’s new cultural center is named, told his elder peers, “Yak’éi áyá has du ée tududasheeyí wáa sá khóo at dultóow yá yoo xh’atánk yoo xh’atángi has du éexh yáa uháan Lingít xh’éináxh yoo xh’atula.átgi. It would be good if we help whoever is teaching the Tlingit language, those of us who speak Tlingit.”

These and many other words of the elders deeply inform the Institute’s work and continue to inspire and motivate learners today. It was as if they planted little seeds, embedded pockets of knowledge and meaning in our hearts and minds, which would only deepen within us as we matured and were in need of the wisdom that was left in our care. Guided and encouraged by the elders over many years of advocacy and development, the Institute joined with many organizations including southeast Alaska school districts and the University of Alaska Southeast in developing a comprehensive, region-wide network of Tlingit language programs, learners, and teachers. There are now over 500 students of the Tlingit language in the Juneau School District, for example, and many teachers who dedicate their lives to learning and passing on their knowledge of the language. Many of these teachers received scholarships from the Sealaska Corporation, attended language immersion camps, and have been continually supported as their efforts bolstered the Institute’s mission and goals. It is truly a community effort.

Additionally, the Tlingit Language Master Apprentice Program, currently in its first year, supports Tlingit language immersion for six master-apprentice teams in three Tlingit communities. The teams will speak at least 260 hours of Tlingit together over the course of three years. As Sealaska Heritage Institute President Rosita Worl said during the launching of the program, “All languages reflect worldview. And there is a lot of knowledge and experience embedded in that language. For our human society that’s been around for thousands and thousands of years, we want to be able to capture that knowledge.”

The Institute is also documenting hundreds of hours of Tlingit language audio recordings and texts from its extensive archival collections. Most recently we completed a National Science Foundation project that produced transcriptions and translations of 31 Tlingit language texts. Tlingit linguist James Crippen estimates that less than one percent of the total available Tlingit recordings are transcribed and translated, so this project adds significantly to the body of work for study. The greatest stories, along with everyday conversations, were documented. Students of the language can now mine the texts for stories of the Migration and Great Flood, for Xh’a Eetí Shuwee Kháa, Slop Bucket Man, for funny conversations among elderly Tlingit women, or passionate advocacy for subsistence of the Tlingit language. The tiny portion of Tlingit knowledge that we have uncovered is slowly beginning to unwrap for us, available for the eager and dedicated learner.

The Sealaska Heritage Institute also stood with Tlingit Elders, students, and faculty of the University of Alaska Southeast, and many others both Native and non-Native, in advocating for the passage of the historic state House Bill 216 that officially recognizes 20 Alaska Native languages as equal in standing with English. Advocates for the bill were passionate testifiers and lobbyists who hosted a sit-in at the Capitol building lasting from midday to 3:30 a.m. on April 21, when the bill finally passed to a great cheer from the packed galleys. With the signing of the bill into law by Governor Sean Parnell, Alaska, will join Hawai’i to become the two states that recognize Native languages as “official languages of the state.” This is one of the great civil rights struggles of our times. Our world is in our language, our breath of life. We are truly equal when our particular, unique container of wisdom—haa yoo xh’atángi, our language, haa khusteeyí, our way of life—is acknowledged, honored, and respected.

The elders always gave us this strength. Sometimes we didn’t even fully comprehend what we were told until it came back to us like a vision of strength and forbearance that helped us to continue on. Elder Nora Dauenhauer tells Tlingit students that the elders told all kinds of stories to people of all ages. No one told children’s stories; everyone heard the complex, deeply layered, sophisticated, beautiful stories. Speaking of the complexity, Nora and her scholar husband, Richard, often mention that people “grow into it.”

In one of the most popular stories of Yéil, “Raven,” the Raven is said by some to have stolen the sun, moon, stars, and daylight from his grandfather, Naas Shagee Yéil. The way that Austin Hammond, Daanawáakh, told it, however, was that “Haa dachxhánx’i yán áyá tusixhán. We love our grandchildren.” In his telling, the Raven’s grandfather gave him the things he most treasured, even at the risk of losing it. The Raven opened those boxes and let free much of the universe, the material of life. And so it’s nothing less than the universe that we’re opening when we open the container of wisdom, given to us from the love of our grandfathers and grandmothers.

Even those things we treasure we used to offer up to them, to those who are our grandchildren.”

Ishmael Hope, born in Sitka, Alaska, and living in Juneau, is a storyteller who shares stories from his Iñupiaq and Tlingit heritages. He is on staff at the Sealaska Heritage Institute.