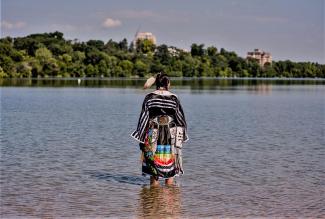 The growing global water crisis is prompting many world leaders and organizations to respond through a myriad of top-down approaches. Consequently, Indigenous Peoples are often left out of leading global forums and dialogues on water—yet they are often the first to be negatively impacted by escalating environmental issues. For the past two years, an international group of Indigenous Peoples, youth, and allies have responded to these pressing challenges by convening a global Indigenous water summit dedicated to the Indigenous right (also a human right) to water. The Mni Ki Wakan (Water is Sacred): World Indigenous Peoples’ Decade of Water Summit seeks to elevate the voices, perspectives, and solutions of Indigenous Peoples on water issues to unprecedented levels of global innovation.

Mni Ki Wakan is an intergenerational, Indigenous-led global water summit centered in the collective wisdom, goals, and actions of Indigenous Peoples, leading with the time-honored theme and mandate that water is sacred. In 2018, there were several developments that worked to strengthen the past year’s Summit. In efforts to uplift and expand the work accomplished by the Mni Ki Wakan participants during its first annual summit in 2017, fivve planning committee members brought the important work of this summit to the United Nations Permanent Forum of Indigenous Issues 17th Session (UNPFII) in April 2018. There, organizer Thorne LaPointe (Sicangu Lakota) announced Mni Ki Wakan: World Indigenous Peoples’ Decade of Water Summit. After meeting with Indigenous Peoples, UN-Water, and UNESCO representatives to explore areas of future collaboration during the Permanent Forum, LaPointe extended an invitation for others on the UN floor to join them at the second annual convening of Mni Ki Wakan.

Held in St. Paul, MN, the second summit brought together members of the Innu people from the sub-Arctic region; a Maori delegation from Aotearoa/New Zealand; members of Stoney Nakoda and Cree Nations from Canada; Chamorro of the Mariana Islands and Guam; an Indigenous delegation from Hawai’i; members from over ten North American Tribal Nations; and allies from Canada and the U.S. On the first two days, participants canoed the Okizu (Where the Waters Become One) riverway, a sacred Dakota ancestral river in Minnesota. In recognition of the Indigenous cultural water protocols of the region, each delegation made a traditional water offering according to their traditions in preparation for the following two days of sessions and interactive dialogue facilitated by Lemoine and Thorne LaPointe.

Sessions began on August 8 with a keynote address by 13-year-old Autumn Peltier (Wiikwemkoong Unceded Territory). Earlier in the year, she spoke at the United Nations on World Water Day, March 22, 2018, calling on attendees to “warrior up.” In her keynote address at Mni Ki Wakan to Indigenous Peoples, youth, and allies from the world community, she said, “We need to act now, as the destruction to the planet is not waiting for us to catch up or stop. I am honored I am here today so we can gather our warriors together and make change happen and not just talk about it anymore . . . it is not even the people in this room that we must convince; we all know why we’re here. We are the warriors that are trying to create a change, and to push to be that voice for our Mother Earth.” Peltier’s powerful words resonated deeply with each Indigenous delegation and ally as they prepared to develop actionable innovations and transformative possibilities during the sessions throughout the day. 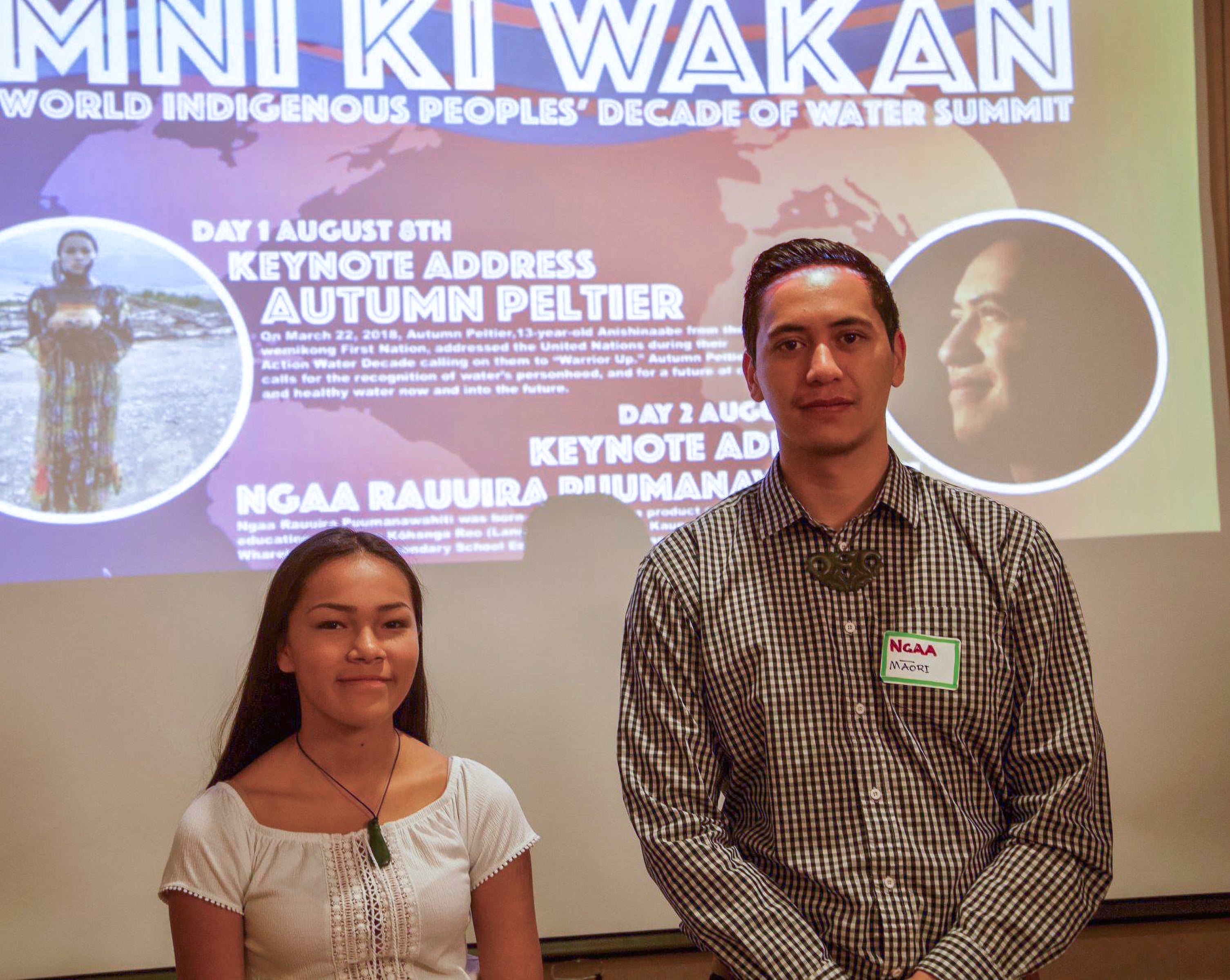 On August 9, keynote speaker, Ngaa Rauuira Puumanawawhiti (Maori), who provides policy and strategy advice through the Rights and Interests Unit to the iwi (nations) of Waikato-Tainui in New Zealand, was joined by his delegation in presenting to participants. In part, he spoke about his Maori delegation’s experience in providing a number of rights recommendations to Victoria Tauli-Corpuz, UN Special Rapporteur, at the Permanent Forum prior to the 2018 Mni Ki Wakan. He shared about one experience in particular related to national water legislation, saying, “Our recommendation [presented to the Special Rapporteur] was that by its [fiscal] year, the New Zealand government make no new investments into fossil fuels. Because we can’t on one hand address the climate crisis, but continue to support the industries that are responsible for the pollution.” Puumanawawhiti described the crucial importance of building a global Indigenous community according to traditional protocols and the need to be innovative in policy. His delegation invited Mni Ki Wakan participants to their inaugural “2020” convening in New Zealand.Their resounding words illuminated the powerful sustainability of Indigenous worldviews in policy and innovation.

At the conclusion of keynote addresses each morning, participants engaged in a series of strength-based questions during summit sessions. “What actionable innovations will launch goal-oriented changes to this Indigenous-led water summit?” asked LaPointe to some 50 Indigenous Peoples, youth, and allies, a question that was emblematic of the summit’s tone. Participants provided recommendations for actionable innovations, goals, and consensus for a guiding holistic framework on water, titled, “Mni Ki Wakan: Global Report.” One participant, Uapukun Mestokosho (Innu) from the sub-arctic region of Canada, expressed her experience at the summit, saying: “Each one of us is a drop of water; together, we are an unstoppable force capable of breaking down all barriers.” Participants shared about the central roles that Indigenous languages and cultural diversity have in restoring and protecting biodiversity across land and water. Key relationships were established that have provided access to untapped innovation and opportunities for collaboration, support, and initiatives.

Mni Ki Wakan concluded with a traditional Wacipi and Oskate (dance and celebration) in observance of the International Day of Indigenous Peoples, where dancers, singers, and over 200 attendees traveled to honor and learn about the contributions of this past year’s Mni Ki Wakan participants. The Global Report is being used by regional coordinators and co-conveners to guide their future work on the upcoming third annual global water summit. Some recommendations gathered during discussion included the use of modern technology for the restoration and sustainable use of water with the integration of traditional ecological knowledge in these approaches. Actionable innovations called for global indigenous water ambassadors. Participants called for a stronger regional, multi-level, cross-sectional, and youthoriented global community.

The next Mni Ki Wakan: World Indigenous Peoples’ Decade of Water Summit will be held in Black Hills, SD, August 13–15, 2019. The location of Mni Ki Wakan is known to the Lakota people as He Sapa (Black Hills), the “Heart of Everything that Is.” The Lakota people believe that He Sapa is the sacred place of origin from which they emerged, appearing as a heart from aerial images. Co-conveners and regional coordinators are working with Lakota team members in South Dakota and will be making a call for session proposals.They invite the world community to attend, and are working with French and Spanish translators for the 2019 Mni Ki Wakan.