Michael Preston: We Are Our Own Experts 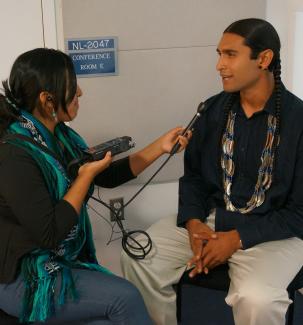 "We are speaking on behalf of Mount Shasta and the McCloud River. We are working on restoring our salmon population on our river that was blocked by Shasta dam, which covered up to 90 percent of our homelands. It’s great to see all of the Indigenous people here from around the world coming together for the same cause. It’s about protection of our homelands and and trying to communicate that the best we can in order to speak up for Mother Earth.

I want something dramatic to come from this: justice for the whole world and protection of sacred sites; for the whole world to understand the importance of land, that it goes beyond economic means, and to think about it as a life force that controls everything and that we are just a part of it. And that exists outside of political language. It exists outside of States, it’s bigger than governments, and it’s bigger than the people here. We’re just the people speaking up for it. I want that worldview taken more seriously, because that’s what the truth of the land is. We want more time dedicated to these issues on behalf of the UN.

Being a younger person and forging alliances with other young people who are here, working with each other in the age of social media, I think that will be a very powerful thing. The UN process has not been very successful as far as protecting our homelands where I come from. Whatever progress is made here, we have yet to see it back home in my local community. I think all those communities that are here would like to see that as well. It’s such a general thing to say, “protecting our homelands”—what does that mean? That statement encompasses so much, but we have to keep it short because we’re elevator speeches out here. It basically means protecting the rivers and restoring the ecosystem to the way it’s supposed to be.

Youth should try to make it to the UN. Be aware of your local issues, your home, your own family issues, and become an expert on that because that’s what we are. We are the experts of our own people and our own issues. We can combine with other people who have that power, and we can form alliances, and then we can protect our people. That’s our obligation, to protect our moms, and our grandmas, and our future kids and the land, because that’s what Indigenous people do. That’s our job in life. Remembering always what our traditions are, speaking the language, remembering our dances and songs, remembering our sacred sites, and just those old ways. The old ways are universal. They’ll never be old, they’ll never be new, they’re just the truth. And that’s what we need to be realizing. There’s a conscious change. Just being educated on our own tribal histories and ways of life is so important right now. "