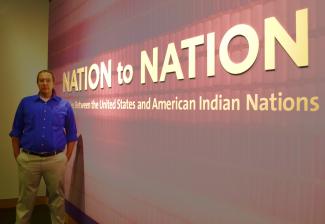 Meet Michael Johnson, Cultural Survival’s new director of development. He has more than seven years of experience as a successful fundraiser for national Native American nonprofit organizations, including the American Indian College Fund and the Notah Begay III Foundation, and as a senior program officer working with at risk young men and environmental stewardship at First Nations Development Institute. On his new role with Cultural Survival, Michael said, “I am honored and excited to be part of the Cultural Survival team. I see so much potential for our programming to continue to make a real difference in the lives of our Indigenous brothers and sisters across the globe.”

Michael grew up in Parker, Colorado but spent summers and family vacations with his relatives on the Fort Berthold reservation in North Dakota where he and his family are enrolled members. His matrilineal grandmother, Marilyn Youngbird, and his mother, Susan Johnson, have always been great advocates for Indigenous rights and proud members of their tribe. His father is of European descent, and his mother is of mixed Indigenous descent (Arikara, Hidatsa, and Ojibwe). The oldest of four children, Michael spent his childhood playing baseball and football with his brother and friends, camping and fishing with his father’s family, and being outdoors in the great state of Colorado.

Observing his grandmother’s work as the first executive director for the Commission on Indian Affairs and his mother’s work as a tribal liaison for the Forest Service, as well as her strong activism in the American Indian Movement during his youth, ignited Michael’s passion to fight for the rights and livelihoods of his people and all Indigenous Peoples. After graduating from the University of Colorado-Denver magna cum laude with a focus on classic philosophy and political science, he transitioned from for-profit to nonprofit work as a development officer for the American Indian College Fund, an organization whose mission to create educational opportunities for Native youth is close to his heart.

Michael believes that many issues facing Indigenous communities stem from the lack of representation and meaningful participation in issues affecting them. “While issues of culture and language revitalization, land rights, education, and economic prosperity are all very important, I believe these and other issues Indigenous communities face in modernity boil down to the lack of political agency these communities experience,” he said. “Many Indigenous people lack the freedom to fully exercise their rights, capacities, and self-determination. Indigenous communities must continue to demand meaningful representation, ownership, and authority in issues affecting our lives.” Michael believes that it is important to make Indigenous issues “accessible and known for people and institutions that share a passion for rights, culture, and traditions.” While Michael gains inspiration from all aspects of life, he is particularly motivated by his daughter, whom he credits with inspiring him to create a better world. He looks forward to helping uplift the voices of Indigenous leaders and bringing stories of Indigenous perspectives, advocacy, and grassroots solutions to the supporters of Cultural Survival. More than anything, he anticipates Cultural Survival to be an important voice in “supporting the momentum of self-determination for Indigenous Peoples around the globe.”

Contact Michael to find out ways you can get involved with Cultural Survival at mjohnson@culturalsurvival.org or 617-441-5400 ex. 20.

Michael at the “Nation to Nation” exhibit at the National Museum of the American Indian in Washington, D.C.