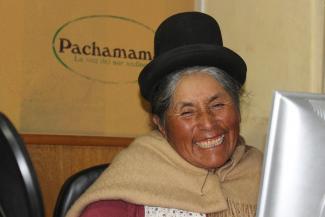 There are few people in this world that truly light up a room with their presence. From the moment one meets Rosa Palomino Chahuares, it is clear that she is one of those people. She has a smile and a light in her eyes that energizes and inspires, and her tireless life’s work promoting Indigenous women’s rights in rural Aymara communities is a reminder of the potential to overcome adversity when you are dedicated, optimistic, and truly care about your cause. “I think what sets us apart from other groups is our optimism. We always stay positive and believe that good things will happen,” says Chahuares.

Chahuares has been working as a radio broadcaster and women’s rights advocate since she was 16 years old, promoting the Aymara language and culture and questioning patriarchy in settings where men respond aggressively to the word “feminism.” In 2014 she was presented with an award of distinction by the Ministry of Culture, and she currently serves on the board of the Network of Indigenous Communicators of Peru. She is also a member of UMA (Union of Aymara Women of Abya Yala), a group well known in Peruvian Indigenous rights and community media circles, and with good reason. UMA’s women’s program, Wiñay Pankara (“always blooming”), broadcast in Aymara at Radio Pachamama in Puno, Peru, brings to light the reality for women in Aymara communities, highlighting the efforts of women who are working to improve the situation for themselves and their communities. “Communication is the backbone of society. I saw that the women of my people were excluded and marginalized, so I started working for my culture,” Chahuares said in a 2014 interview with Servindi. “Wiñay Pankara opened a space in the Aymara population. Women have lost their fear, they have strengthened themselves by participating in the media. Women now know what our rights are...[they know] our culture, the rights of women, our wisdom. Speaking on the radio makes the authorities respect us. Everyone listens to our participation and our word. Our children also listen to us, to whom we are saying what the situation on earth is like.”

In order to broadcast, UMA must buy a weekly 25-minute spot at great expense. This is the only option in Peru, a country that does not allow access to radio bandwidth for community radio stations. The lack of access means that even communities that are able to afford radio space do not have full autonomy over what they can broadcast; they are given only small pockets of time to speak in their languages, cover topics of interest for their communities, and promote their cultures amidst an endless sea of ads, music, and government propaganda at local commercial radio stations. Access to information and community media and the freedom of expression are basic rights that make up the foundation of a well-functioning society. Yet, Indigenous communities all over the globe must continually fight for these rights to be respected and guaranteed. Aside from lack of recognition and funding, Indigenous journalists and community radio operators frequently incur physical and/or death threats and state persecution for exercising their rights in order to serve their communities.

In spite of a grave lack of resources, UMA continues to do impressive work to expose rampant societal misogyny and provide opportunities for women to rise up, both on the air and in their communities. Chahuares and other members of UMA travel to communities at their request to hold workshops with groups of women on a regular basis, even when there are no resources to do so. All of the women participating contribute whatever they can, and the women of UMA travel on their own dime to facilitate workshops. In addition, Chahuares travels to different communities every week to conduct interviews so that she is always prepared to broadcast new, relevant material on their program. One of the younger members of UMA, Elisa Condori Cari, explains what UMA has done for her, “Since I became a member, I feel proud to be an Aymara woman, proud of my roots and my customs, of the respect that my people have for nature, and of the importance and the necessity that exists to find value in our culture.”

Chahuares and her fellow women’s rights activists face deeply entrenched misogyny every day. In a neighboring town where a group of young men buy airtime at another commercial station to hold their Aymara cultural program, Chahuares kept her cool as the men explained how bothered they were by feminists. Unphased by the discourse, Palomino maintained a smile and total composure as the men argued that women were the real machistas, that it was mothers who raised their sons to be the way that they are, and that women were the ones least likely to support other women. This was clearly not the first time that she had heard talk like this. She waited for her moment to meet these men where they might find some common ground. When she spoke, she referred to the Aymara words chacha warmi, which represent the symbiotic and complementary relationship between men and women as it has been understood historically in Aymara communities. It is this talent of communicating controversial messages to dissenting groups with ease that makes Chahuares such a great community broadcaster and a significant figure for women’s rights initiatives in Peru.

As of December 2016, the women of UMA no longer have any funding to continue their radio program. They had been searching for funding sources to continue their program, but with no success. Their greater goal is to have their own radio station where they would have full autonomy over their programming; where they would provide a space for different sectors to participate; and where women would be given the opportunity to find confidence and grow as community broadcasters.

In January, Cultural Survival’s Community Media Grants Project selected UMA as one of its grantees. The Community Media Grants Project provides opportunities for international Indigenous community radio stations to apply for funding through a nontraditional, culturally appropriate, and dynamic grants process designed to meet the needs of these flourishing community broadcast systems. Grants are available to provide equipment, training in production and journalism, legal support, and content production, as well as specific trainings to ensure sustainable and impactful communication platforms and regional networks that support and advance Indigenous communities’ rights and ability to engage in relevant issues affecting their wellbeing.

This one-year project with UMA will allow them to double their airtime on the radio and provide opportunities for more local women to be trained to become community broadcasters with the support of UMA mentors. The women of UMA will be holding workshops with Aymara women in surrounding communities that aim to bring to light the value of Aymara women in their communities, to help these women to find and believe in their own self-worth. This will be the foundation on which the rest of the learning will be built. After completing the empowerment training, the women will learn to produce and record radio programs on their rights and the rights of their communities.

The women of UMA understand that their power is built on their solidarity. The more women that are educated, that believe in themselves and their sisters, and that are motivated to make a change, the more likely these women are to achieve the equality that they have so long been pursuing. At 65 years old, Palomino’s dream continues to be for the women of UMA to have their own community radio station. Even if she doesn’t see it in her lifetime, she hopes that her two daughters who have been involved with UMA since they were children will continue the fight that she began: “I can leave this world happy knowing that my daughters and the other women of UMA will continue the fight that I began so many years ago.”

Women of UMA on air at Radio Pachamama in Puno, Peru.

All photos by Angelica Rao and Avex Cojti.