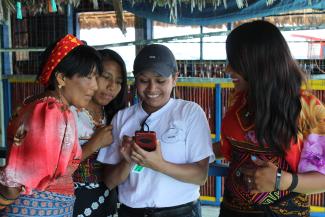 This past February and March, Cultural Survival radio producer Rosy Sul González and staff member Jessie Cherofsky visited the Kuna, Ngöbe, Bribri, and Brunca communities in Panama and Costa Rica to exchange ideas on community radio, Indigenous rights, and cultural survival. They distributed radio programs on the right to Free, Prior and Informed Consent, held workshops on the principles and practices of community radio, and interviewed elders and leaders about their communities. In return, they learned about grassroots language revitalization efforts, community-based cooperatives, and political structures that have challenged globalized efforts exploiting Indigenous lands. Most importantly, they forged connections with Indigenous brothers and sisters from around Central America, a reminder that we share the same roots and are fighting the same fight.

Maintaining Languages from the Grassroots

Panama is a country of about three million people, almost 10 percent of whom are Indigenous. The official language is Spanish, but many Indigenous communities there are undertaking great efforts to rescue and promote the Indigenous languages of Kuna and Ngöbere through schools, museums, community radio, and the Catholic Church.

In Kuna Yala, the Indigenous comarca, or reserve, that is home to about 70,000 Kuna people, we spoke with elementary school teacher Jenny Hernandez about Kuna Yala’s Bilingual Intercultural Education initiative. She told us, “Our language is being lost because of all the tourists passing through here, since now it’s necessary to speak Spanish. But in the schools we’re giving classes in Kuna and raising awareness among the children so they grow up bilingual and know they must value our mother tongue.” The effects of tourism and other forces of globalization are a common theme in Indigenous communities throughout Panama, threatening many languages. Yet the results of the efforts Hernandez described were evident throughout our visit as many of our conversations and interviews with community members were conducted through translation between Kuna and Spanish.

Ngöbe communities in the Ngöbe-Buglé comarca in western Panama are also working to rescue their language, which has been estimated to be 90 percent lost. First, they are implementing bilingual education efforts in primary schools. Second, the nascent community radio station, La Costeña Kusapin, broadcasts partially in the mother tongue (for now, Ngöbere programming comprises only a small percentage of the radio’s current broadcast schedule). Third, the parish priest of Kankintu, José Tomas González Medina, though not Ngöbe himself, delivers sermons in Ngöbere. In these spaces, local leaders have taken on the task of rescuing the language, knowing that it is an important part of the culture and vital to keep it from disappearing altogether.

A group of Brunca people in Boruca, Puntarenas, Costa Rica, has taken a different approach to language maintenance. We visited a local community group there whose members, with the support of the Ministry of Culture, are working to rescue the Brunca language, estimated to have been 95 percent lost. The group is studying grammar and conversation under the guidance of a community elder, Don Nemicio González Maroto, recording conversations to replay and examine correct Brunca grammar and pronunciation. Later, they produce short radio messages for broadcast on Radio Cultural Boruca.

We also spoke with Ligia González Maroto, whose interest in rescuing the Brunca language stems from a promise she made to her mother. “Before dying, my mother asked me to promise her I wouldn’t stop speaking the language. For me it’s incredibly important to continue fighting so we don’t lose it and to practice it with my children and motivate others in the community to speak it,” she said. In addition to keeping the spoken language alive, one of the group’s objectives is to develop documentation of the Brunca language for use in schools, libraries, and homes on a national scale.

One of Kuna Yala’s most unique and exemplary attributes is its ancestral system of political organization. This system allows for effective management of financial and natural resources, and as a result, the Kuna people are well equipped to defend their lands throughout the comarca. When a communications corporation wanted to install a cell tower on Kuna land the Kuna people carefully analyzed the situation and, through traditional decision-making processes, deciding that the tower would bring them no benefit, refused to permit its construction.

Still, it was telling that when we spoke to Kuna community members about the right to Free, Prior and Informed Consent and our radio initiative, many people had little knowledge of the legal term—despite the fact that the concept is regularly put into practice within the comarca. It became clear that the community defends its land and territory based on innate understanding of their rights as Indigenous Peoples, rather than international law. We were able to inform community members of the resources meant to uphold their rights in national and international laws, knowledge which we hope will strengthen their strategies as they continue to protect their lands.

In the different communities we visited, we shared the work being done in Guatemala by the Community Radio Network. We spoke about the network’s stations, their challenges, and their progress. Many communities were both shocked and impressed by accounts of Radio Ixchel and others, especially considering the danger they face from persecution by the Guatemalan government. It was apparent that the radio stations in Panama and Costa Rica are struggling with certain aspects such as developing objectives, vision, and mission, as well as widespread community participation. Despite this, they have clearly gained their communities’ respect and are working hard toward incorporating issues such as human rights, education, and traditional culture into their programming.

A particularly successful example is Radio Cultural Buenos Aires, also in Puntarenas. The station is a member of the Costa Rican Radio Education Institute, a network comprised of 11 cultural radio stations that provides educational programming and occasional workshops and trainings. We spoke with Mauricio Fernandez, an officer of the National Civil Police and a member of Radio Cultural’s Board of Directors, who told us that the police participate in the station through programs addressing issues such as public safety, human rights, drug addiction, and domestic violence, among others. “Radio has allowed us to get closer to people in their homes. We raise awareness among parents to help protect children. Radio is one of Buenos Aires’ great strengths,” he said. Fernandez’s enthusiasm for radio stands in stark contrast to the Guatemalan police’s treatment of Guatemalan community radio, and exemplified how positive and mutually beneficial relationships between community radio and government agencies can be.

In contrast to the institutionally backed Radio Cultural Buenos Aires, Radio La Costeña of Ngöbe community Kusapin started, and remains, grassroots. Station founder and director Jey Concepción recalled the story of its beginning: “A little over three years ago, I was talking with a friend who had some interesting ideas. We decided to do something different which would also benefit the community: as we entertained ourselves, the community could also benefit. So that’s where the idea came from to create something more than just a station. At first we had a tiny apparatus that could broadcast no more than 10-15 meters. Now we have this equipment and it is a huge success. The people were really enthusiastic, everyone with their own radio trying to hear what program was on, happy that Kusapin had its own radio station innovating, modernizing, making progress. Everyone was happy.” The station has come a long way in a few short years. Said Concepción: “With the maturity I have from two to three years working on this, I focus mostly on providing better service to the community so they have within their reach this form of communication, a good quality service. I’ve always had the station’s doors open to anyone who wants to produce their own program, as long as it is advantageous to the community. It’s a form of communication that is accessible to every community. We don’t broadcast lies, but rather truth.”

Community radio is a tool that can be used to meet a community’s cultural, economic, social, and psychological needs. In Amubri, Talamanca, Costa Rica, a center for the Bribri culture and home to Radio Cultural La Voz de Talamanca, the lack of women’s participation is obvious. Women suffer domestic violence and begin their roles as wives at a very early age, which has resulted in low self-esteem, anxiety about getting involved in community organizations, and fear of making their voices heard and demanding their rights be respected. They may be present physically, but the total lack of opinions, doubts, suggestions, and participation on their part was palpable. “Women here are very submissive,” Mildred Blanco Salazar, president of the local plantain cooperative and member of the station’s board, told us at a meeting with the local women’s organization. “We simply dedicate ourselves to our children and don’t participate in many other things. We see other Indigenous communities and realize we waste a lot of the opportunities that we have.”

The women’s organization is working to change this by organizing workshops and trainings for the women. During our time with them and the radio team, we shared a variety of ways women can be involved in radio and urged them to encourage women to participate. We explained how Radio Ixchel in Guatemala has put a lot of time into motivating and empowering women, to the point where the current president is a woman. While such a process of empowering women and changing ingrained cultural mindsets about them cannot happen overnight, the women were grateful we had come to share our experiences and offer another vision of women’s participation. The mostly-business meeting dissolved into friendly discussion as the Bribri women swarmed with questions about traditional Maya traje, or dress. The women from Guatemala and Costa Rica had the chance to indulge friendly curiosity and exchange questions with their Indigenous sisters from across the continent.

The followup to a trip of this kind is complex and long-term. However, ideas are already flowing. Anelio Merry, our guide in Kuna Yala, told us, “I want to thank you for your visit. It definitely inspired us to take up the idea of community radio again. The experience you have had [in Guatemala] is really motivational. We are already discussing the idea with our leadership and they are quite excited about it. Even more, they are saying we should have our own community radio. Last weekend we met with our leaders to solidify ideas on this radio project. To make it happen, though, we’ll need the experience of other Indigenous Peoples, our brothers and sisters, who are ahead of us on the issue of radio.”

Merry’s comments affirmed what had become obvious to us throughout the journey: these exchanges are so vital. Through our visits, we help each other. To all the cooperatives, ancestral authorities, schools, community radios, and other organizations led and populated by Indigenous men and women: we must keep working for the benefit of our cultures. But it’s time to stop working separately and begin working together!