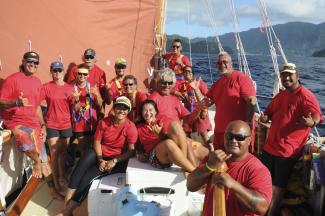 This article is the third installment in a series documenting the historic undertaking of the three-year voyage of Hōkūle‘a, a full-scale replica of a wa‘a kaulua (Polynesian double-hulled voyaging canoe) around the world.

Leg two of the World Wide Voyage took us from Tautira, Tahiti all the way to Pagopago in American Samoa, a leg dubbed by the crew as “A Fantastic Voyage.” We made 16 landfalls and sailed just under 2,000 miles. With the utmost sincerity, we were regularly greeted with the words “welcome home.” We knew then that we as an Oceanic people share the ancestry and legacy of those that have gone before us, and those that have connected our islands.

There are not enough pages in this magazine to recount all of the amazing stories experienced on this voyage, but I will share with you a small taste of each island. We arrived in the evening in Tautira, the official start of our leg of the voyage. We were immediately split up and sent off with families of the village to stay with. By the time we left we were indeed part of their family, and from that point on, we understood that we have been adopted; whenever we return to that village, those are our families we return to. We have been blessed with the greatest blessings of aloha. As we bid farewell to Tautira, we were joined by the Tahitian sailing canoe Faafaite, which would sail with us all the way to Rarotonga.

As we arrived in Moorea, we learned a valuable lesson about announcing our arrival through proper protocols to let the ancestors of the island know us through chanting the genealogy of Hōkūle’a. The sail to the island was smooth and uneventful, but as we got close to the island and attempted to anchor, the winds picked up and blew forcefully. We realized it was because the ancestors of the island did not know us. From that point on, as we neared every island, we chanted our genealogy and had smooth access to each island. We drank the sweet water of a special spring and got to know the island with her mountains that resemble an octopus, whose head is on the central mountain and whose eight legs extend outward on the mountain ridges pointing to the various Pacific island cousins of Hawai‘i, Samoa, Aotearoa, and so forth.

We landed at Taputapuatea on Raiatea. Taputapuatea is considered the spiritual center of the Tahitian islands and the Pacific, and there lies a special altar honoring Hōkūle’a. As we made landfall we were instructed to pick up a small piece of coral before stepping on dry land. We carried our pieces of coral until the day we left, at which time we placed them on the altar, honoring our connection between Raiatea and Hawai‘i.

When we arrived on the island of Huahine, we made our first landing around Haapu, a special and powerful place whose residents govern by the ancient practice of Rāhui, a traditional method of stewardship on land and sea. Fishing, farming, and hunting are governed by traditional seasons and traditional gathering methods. If you are caught in any of these activities out of season or without the proper permissions, your equipment is seized. This is how the villagers police their lands and ensure that the health and sustainability of the land will be here for generations to come.

We had two landings in Tahaa. The first was on an atoll in the lagoon, and then we moved on to the main island. It was a short visit, less than 24 hours, but we got to know the people and the stories of their island. We also visited the remnants of an altar dedicated to the demigod Hiro, a demigod much like Māui of the Hawaiian legends.

Borabora is a much desired tourist destination of French Polynesia. In order to sustain the industry yet provide for the people and cultural practices of the island, the people have developed water purification systems to turn waste water into safe industrial water for farming, gardening, and other nonpotable uses. Desalinization methods supplement their springs and aquifer for drinking water.

Our arrival on Maupiti marked the first ever landing of Hōkūle’a on that special island. The outer pass is home to a treacherous current and pounding waves, and the timing and seas have to be just right to bring a canoe in through the pass. Although a difficult passage, we chanted our genealogy, and a chief from that island, Papa Maui, boarded Hōkūle’a to escort her in safely with the guidance of their ancestors. We were greeted as family and shown our connection through their chief who visited many generations ago from the Hawaiian Islands named Rihoriho, better known as Liholiho in Hawai‘i. They also shared their stone fishing method that is such a big task, it is requires the participation of the entire island and is only done once every 10 years—simply amazing!

As we approached Mitiaro Island we encountered rough weather swells and 55 mile per hour sustained winds, similar to the ‘Alenuihāhā channel in Hawai‘i. We made our way to the lee of Atiu Island to wait for the winds to weaken and continued on. We were always safe with Hōkūle’a caring for us, riding smoothly in the weather. We arrived in Rarotonga and were cared for by the royal Napa family, the family of master navigator Tua Pittman, and the crew of the voyaging canoe Marumaruatua. We visited the altar for the Paoa family and met with special people, including the prime minister of the Cook Islands. He shared with us their initiatives of setting aside marine protected waters and greatly reducing their dependence on fossil fuels, measures to ensure the viability of their islands and resources for generations to come.

As soon as we stepped foot on Aitutaki, we were led to a special stone and instructed to step on it as we passed onto the island. This simple ritual transformed us from visitors to kupa, or familiars, to the island. We were humbled to see the strong familial ties to Hawai‘i through the Alapa‘i and Kanaka‘ole family lines, and honored that they exhibited so much pride in their shared connection to Hawai‘i.

Arriving in Ta‘u, ‘Ofu, and ‘Olosenga marked the fulfillment of a responsibility of one of our crew members, Celeste Manuia-Ha‘o, to return home via canoe and share with her people the lessons she learned about navigation and voyaging. This was a responsibility given by her grandfather, a high chief of her village. It was a special and appropriate place to make first landfall in Samoa as these three islands make up Manu‘a, the Islands of the Chiefs.

Our last landfall on this leg of the World Wide Voyage was Pagopago, American Samoa. Once again we were greeted with the utmost sincerity and aloha. We were truly touched to be amongst these great people and treated as family. But there was an unrest within as we knew that this was our last landing as a crew that had bonded as family on this leg of this fantastic voyage. As we disembarked Hōkūle’a for the last time, three large ‘iwa birds swooped down and circled the canoe at mast height and lower, so close that we could see into their eyes, eyes that spoke to our souls, saying, “all is well."

* Mālama Honua translates to “care for the earth.”

For more information and to follow the voyage, visit www.hokulea.com.
Read the Hawaiian version of this article here: goo.gl/MzMSML.