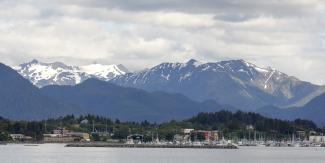 Totem poles have been a vital part of the Tlingit people’s oral tradition long before Europeans set foot in North America. More recently, the ancient medium has found expression communicating messages of health and wellness on the grounds of a Sitka, Alaska community health center. The totem includes traditional images like the raven, but also carvings of a shaman and medicine woman that address issues of alcoholism, substance abuse, diabetes, and cancer. Statistics are not required to underscore the seriousness of these public health threats, which now include climate change and overfishing. They are easily discernible in the image of the medicine woman, down whose cheek a tear is falling.

Sitka is located more than 850 miles by air from Seattle and is one of the most expensive places in the U.S. to buy food. In such a remote place, small things, like herring roe, matter, and big things, like food, cannot be taken for granted. Sitka is home to 9,000 people, who depend on twice-weekly barge deliveries for their food—deliveries that are often delayed by bad weather—and where food insecurity and subsistence foods like salmon, herring roe, deer, and beach asparagus take on profound meaning.

Subsistence fishing, hunting, and gathering are necessary to keep a lid on this remote region’s food costs. Not only are prices 35 percent higher than the U.S. mainland average, they are 10 to 21 percent higher than all but the most remote Alaskan towns. People make a mighty effort to grow some of their own food, but the scarcity of even partially flat land and abundance of stony soils conspire against even the most tenacious gardener. At the Saturday farmers’ market at 10:30 a.m. one July morning, almost all the fresh vegetables had been sold; the market had just opened at 10:00.

Based on a food survey by the Sitka Local Foods Network, 48 percent of Sitkans hunt and fish, another 24 percent receive subsistence food as gifts or donations, and 57 percent report eating fish or game several times a week. But for Tlingit and other Native people who comprise the 4,000 citizens of the Sitka Tribe (2,500 live in Sitka), subsistence foods are an integral part of their cultural tradition. The region’s land and waters are the provenance not only of the Tribe’s sustenance, but also its soul and spirit. The same survey revealed that 60 percent of the Tribe’s members were not able to consume as much of their traditional food as they want.

There are many factors contributing to the decline in subsistence food resources, climate change and limited access to boats and fishing gear by Alaska Natives among them. But the biggest challenge appears to come from the $5 billion Alaska seafood industry, which is meeting the growing worldwide demand for fish protein. In some years, the salmon runs are low and the herring spawn is severely diminished; without those foods Native culture is weakened and individual health is placed at risk. Compared to non-Hispanic whites,American Indians and Alaska Natives are 2.3 times more likely to have diagnosed diabetes, and their youth are 9 times more likely to have diagnosed type-2 diabetes.

Alaskans, including the state government, generally acknowledge that Native people hold a cultural primacy to the region’s bounty. But that doesn’t mean that Native people are exempt from navigating the confusing maze of federal, state, and private land jurisdictions. Even worse, the regulations governing where, what, when, how, and how much game and fish can be harvested constitute one great Gordian Knot. “We’ve seen a decline in the wild catch, not just for us, but across the board for all harvesters,” says Jeff Feldpausch, director of the
Tribe’s Natural Resource Department, who has run the traditional foods program for 14 years while vigorously advocating for the protection of those foods. Expressing frustration with the Alaska Board of Fisheries, which has responsibility for setting various catch limits, he adds, “We’ve exhausted all our avenues. We’re considering other approaches, including . . .”before pausing, presumably not to tip the Tribe’s hand.

As much as the Tribe advocates for the protection of subsistence food, they do what they can to harvest food for their people. Over the past year, Feldpausch’s department has gathered about 20,000 pounds of game and seafood that is distributed to the Tribe’s elders, who have priority over other members. While 20,000 pounds may sound like a lot, it doesn’t come close to meeting the needs of the Tribe.  Subsistence food in Alaska is only 1 percent of the entire wild harvest, with 98 percent—mostly seafood—caught by commercial harvesters. In the words of Nicolaas Mink, co-founder of Sitka Salmon Shares and a natural resource professor at Knox College, Alaska’s fisheries are part of a “colonial food system,” because most of the catch is going to Asia.

One small species that threatens to turn up the heat between the Tribe and State of Alaska is the herring and its roe, an important traditional food. Feldpausch explains, “herring is a critical forage fish for our marine ecosystem, a foundation and bellwether species, but right now we’re seeing the worst herring roe year since 2002. Our Tribe’s elders don’t remember seeing such limited spawning.” According to Alaska Fish and Game records, only 107,000 pounds of roe were harvested in 2015. Harvest figures for 2018 are likely to be lower. Their estimate of the subsistence needs for the region is between 136,000 and 227,000 pounds.

Based on an ethnographic study conducted by Portland State University of nearly 200 Tribal members with “local and traditional knowledge of herring populations,” present herring stocks are being managed in a “depleted status” that represents a fraction of their historical abundance. It concluded that lower rates of herring and roe threaten “biodiversity and regional marine food webs” and the cultural life of the region’s Native people. According to Harold Marin, one interviewee from the study, “Herring are just so important to the total food chain…they feed everything.” Marin identified the crux of the problem—overfishing by commercial interests, which in the case of herring, sell the roe as Kazunoko to Japanese markets for traditional New Year’s celebrations.

The Native method of harvesting roe is to place hemlock boughs just below low tide where the herring spawn. The boughs are then retrieved and the roe removed; the fish is never touched. Commercially, huge quantities of herring are hauled up by seine nets, which don’t distinguish between male and female or their respective sizes. Roe sacs are stripped from the fish cavity, and the dead fish are ground into fertilizer, fish oil, and feed for salmon farms, which, ironically are banned in Alaskan waters. Tribal elders have noted that commercial
fishing takes large herring as well as small ones. Their observations have instructed them that the older, large herring show the younger, small ones where to spawn. When such “fish wisdom” is decimated by reckless fishermen, spawning patterns can be severely disrupted.

Feldpausch says that the Sitka Tribe put forward several proposals to the Alaska Board of Fisheries to reduce the pressure on the annual herring run. All the proposals were rejected, however, a response he characterizes as “managing the resource for the market, not for conservation.” In light of climate change, it is imperative that marine resources be managed more conservatively. Whether herring roe are the proverbial canary in the coal mine signaling an imminent catastrophe is not certain. But a signal we must heed is the one from Native people who live closer to the earth and animals than we do. If the Tlingit are worried, we should be too. The medicine woman’s tear may not be only for her own people, it may be for all humanity.

— Mark Winne is senior advisor at the Center for a Livable Future and is the author of Closing the Food Gap and Stand Together or Starve Alone.