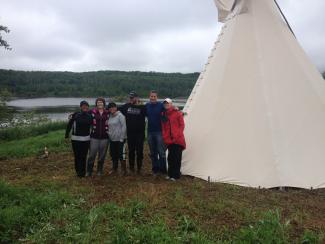 On a cool, overcast afternoon in late spring, a small group of First Nations, Métis, and non-Indigenous university students work together to erect a mîkiwahp (Plains Cree for tipi) on a plot of land an hour north of Saskatoon, Saskatchewan. For most of the students it is their first time setting up a mîkiwahp, but with the guidance of Barry Ahenakew, a nêhiyaw (Plains Cree) knowledge keeper, the students soon have it ready to provide shelter from the coming rain. The students are all pre-service teachers at the University of Saskatchewan who are enrolled in the course “Teaching Indigenous Science,” which was created to help them develop the skills and knowledge needed to include Indigenous knowledge in their science teaching—an expectation for all teachers working with a revised Saskatchewan curriculum that includes Indigenous content and perspectives in every subject and grade level.

This course is one small part of a growing movement toward Indigenous Science Education (ISE) that is unfolding across the globe. The emergence of ISE is being driven by a burgeoning appreciation of Indigenous knowledge as a source of transformative possibilities for catalyzing more equitable and sustainable ways of living, and a growing acknowledgement that science, rather than an objective search for knowledge, is itself a cultural enterprise with its own values, beliefs, and languages. ISE responds to the failures of educational systems to meet Indigenous learners’ needs, a situation most pronounced in science, by respectfully including Indigenous knowledge in science programming, increasing its relevance and opening avenues for Indigenous people to pursue careers in science. ISE thus contributes to sovereignty efforts; with few Indigenous scientists, our communities must often rely on external science consultants with little understanding of our needs, histories, or cultural contexts. The inclusion of Indigenous knowledge can also provide opportunities to transform science and education. While there are many reasons for Indigenous people’s wariness of science (past support of colonial and racist ideologies, exploitive research practices, use by government and resource extraction industries), the respectful inclusion of Indigenous knowledge can help ensure that science reflects the values and aspirations of our communities.

One objective of the course is to help students understand the similarities, differences, and combined possibilities of Indigenous knowledge and Western science. In teaching about the mîkiwahp, for example, a local tree from which tipi poles are made (the Trembling Aspen) is addressed from dual perspectives. The nêhiyaw perspective views the tree as mîtos, a relative and source of medicine, emergency food, and tools; Western Science perceives the aspen as Populus tremuloides, a resource for plywood, particleboard, pallets, and chopsticks. To aid this process, Colin Laroque, a Métis dendrochronologist at the University of Saskatchewan, provided opportunities for students to collect tree core samples on the land—in a process that does no harm to the trees—and analyze them in his lab on campus, providing a unique hands-on experience with Western science that complemented the hands-on learning involved in erecting the mîkiwahp. In ISE, Indigenous knowledge and Western science are not viewed as diametrically opposed, but instead share considerable common ground, which can be a starting place for dialogue and mutual learning. In addition, those aspects that do differ can be viewed as complementing, rather than contradicting, one another, providing dual lenses through which to explore and learn about the world. In ISE, either/or dichotomies are avoided in favor of both/and approaches that help to broaden understandings.

A further objective of the course is for students to explore the idea of miskasowin, a Plains Cree term meaning “to find one’s true sense of self.” Miskasowin can also be viewed as a process of learning to relate by strengthening our identities as Indigenous Peoples and developing more relational worldviews and identities among all people. By focusing on the ways that Indigenous knowledge and Western science situate humans in relation with the natural world, students are encouraged to consider themselves, their worldviews, and their actions in terms of these relations. The term “relate” has a number of interconnected meanings that are relevant. One of these is the acknowledgement of the value of diverse worldviews. Another meaning, that of understanding our interconnectedness with natural systems, is also present within the mîkiwahp-raising activity. Simply spending time on the land, which is a primary source of Indigenous knowledge and Western science, can strengthen this understanding. By respectfully combining Indigenous knowledge and Western science through ISE, we can learn about trees and forests as the lungs of Mother Earth and a primary means of reducing the levels of atmospheric carbon dioxide that are driving climate change. We can then also consider the impacts of our actions as humans from both perspectives—clear-cutting forests as hurting Mother Earth and limiting her capacity to combat climate change.

Learning to relate also refers to broadening our sense of kinship by acknowledging plants, animals, water, mountains, earth, moon, sun, and sky as relatives, a common practice among Indigenous Peoples but less so within Western science. There are strong but underexplored parallels with scientific notions of evolution, which can be interpreted to highlight humanity’s ancestral connections with plants, animals, and all of creation via ideas of cosmic evolution. Quantum physics is also relevant, with comparisons made between the quantum flux underlying matter and the Indigenous belief in a spiritual energy that animates creation. A final meaning of “relate,” that of telling an anecdote or story, reflects the centrality of story among Indigenous Peoples as a means of sharing knowledge. With regard to science education, this means balancing the fact-based nature of Western science with more narrative forms of knowledge and exploring the idea of scientific narratives, i.e., the stories students construct from scientific facts. Laroque, for example, introduced dendrochronology as a form of storytelling, reading the story of the tree encoded in its rings. Further, prior to erecting the mîkiwahp, students were invited to sit, smudge, and listen to Ahenakew share parts of the nêhiyaw creation story, providing an opportunity for them to reflect on its similarities and differences with the scientific creation story of the Big Bang that they had read about earlier.

It is important to acknowledge that ISE requires the creation of ethical spaces comprised by shared understandings of the historical and contemporary forms of oppression that shape Indigenous/non-Indigenous relations. As these spaces can take time to develop, ISE should not be rushed. Further, as evident in the mîkiwahp activity, ISE also depends largely on community involvement, including access to land, elders, and knowledge keepers, which in turn requires an understanding of the protocols that guide processes of relationship building. The effort required to respectfully pursue ISE, however, is well worth it. By grounding science education in culture and language, ISE contributes to the vision for education articulated in the UN Declaration on the Rights of Indigenous Peoples. By opening paths to careers in science for Indigenous people and fostering miskasowin among all people, ISE can help to catalyze the emergence of more equitable and sustainable ways of living for us all.

—Jeff Baker is a Métis scholar and educator from Saskatoon, Saskatchewan and is the University of Saskatchewan’s first ever chair in Aboriginal Education in the College of Education as well as assistant professor in the department of Curriculum Studies.

Photo: All smiles after a day of land-based learning in mistikwatinâhk (the Thickwood Hills), Saskatchewan. Photo by Jeff Baker.