A Language in Crisis: Rohingya 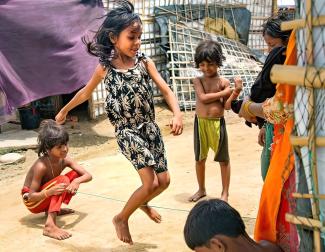 Behind every crisis, there is the loss of culture or language that a targeted people face. The people who are affected are merely seen as victims. At the heart of the slow-burning Rohingya genocide, we Rohingya have lost touch with our own culture and the originality of our oral language. This is another oppression against Rohingya.


Arakan, today’s Rakhine State, situated in the west of Myanmar, is the permanent home of the Rohingya ancestors since the 7th Century. The Rohingya Peoples belong to a distinct culture, language, and faith and have their own arts distinct from those of other people around the world. Rohingya Muslims, Hindus, and the Buddhist ethnic minorities such as Daingnet and Mayamagyi speak Rohingya, an eastern Indo-Aryan language related to Bengali-Assamese. Arakan was an independent kingdom until the Burmese Konbaung Dynasty conquered it on December 31, 1784. Since then, Arakan has been part of Myanmar and was designated as the homeland of Buddhism, a process accompanied by the destruction of many historical mosques and other landmarks. In 1824 the British colonized Arakan, and over time, its Peoples, whether Rohingya, Buddhist, or Hindu, were introduced to a mixture of cultures and traditions.


On January 4, 1948, Myanmar declared its independence from Great Britain. In 1962, a military Junta headed by U Ne Win seized power and his government targeted the Rohingya population in Arakan. To demolish the community, they targeted our culture and arts. In 1964, the government removed the Rohingya language from radio broadcasting. We gradually lost touch with our rich culture, traditions, and arts, despite our long existence and enduring Indigenous identity.


There were several State-sponsored operations carried out by Burmese dictators against the Rohingya population in Arakan. In 1978, the socialist government of U Ne Win launched Operation Dragon King. During the violence, many Rohingya were killed or incarcerated and more than 200,000 others fled to neighboring Bangladesh. In the 1980s our citizenship rights were stripped by the Junta. Since then, an apartheid web of rights restrictions was increasingly tightened in which we were discriminated against socially and religiously. We were restricted in our ability to practice our own cultural traditions and religious festivals.


The abuse culminated in a military crackdown in August 2017, when Myanmar security forces systematically targeted the Rohingya population in Arakan. This time, more than 700,000 Rohingya villagers fled to neighboring Bangladesh, haunted by stories of gang rape, mass killings, and arson attacks that prompted the world’s fastest refugee exodus since the 1994 Rwanda genocide. The United Nations described it as a “textbook example of ethnic cleansing.” After the killings, the Myanmar government bulldozed our ancient Madrassahs, mosques, and other religious buildings as part of their efforts to erase our heritage, a reminder of our deep roots in the
land of Arakan.


Arakan is known as “the green garden,” and is a historical coastal region in Southeast Asia. It is a place of great natural beauty with lush hills, forests, rivers, and all varieties of natural splendor. In Arakan, people rely on mother nature. They love the purity of nature deeply. The smell of paddy fields, the sound of birdsong, and the whisper of flowing rivers in Arakan inspire lyrics rich with appreciation, reflecting our literary and aesthetic sensibilities and the fertile soil provided by mother nature herself, which nurtures the spirit and our wish to preserve the rhythm of these gifts in the core of our hearts.


Once upon a time, when there was no pen and paper in Arakan, our Rohingya ancestors recorded the memories of wars, battles, kings, kingdoms, love, tragedy, and disasters by composing folk songs, folktales, riddles, and proverbs. In this way they left lessons and morals to be passed to their children and grandchildren. Collectively, they represent a saga that began with the ancient Rohingya culture and flows through our heritage, connecting our language to our land and carrying the values and wisdom of our ancestors who came before us in Arakan.

When I was a child, my grandfather had a ritual: every night before going to sleep, he used to tell me those Rohingya traditional folktales, folk songs, and lullabies. On his lap, I would fall asleep while listening to the sound of his voice. The tune is very beautiful, and the depth of the verses would follow me until I understood their meaning as an adult. Now, the world’s largest refugee camp in Cox’s Bazar has become the temporary home of more than 1,000,000 Rohingya refugees. Myanmar still refuses to offer any guarantees of safety or rights to the Rohingya. After the latest military coup in February 2021, many Rohingya worry that they won’t be able to safely return to their homeland for years or possibly decades. These refugee families have no choice but to force themselves to stay put. More than 600,000 Rohingya people still reside in Myanmar, but they are at risk of further genocidal acts at the hands of the Myanmar military.


Exile not only fades the light of our culture, but also forces us to adapt our language and culture to that of the host community. In these refugee camps, Rohingya aid workers, teachers, religious leaders, majhis (camp leaders), and others are forced to use the Bengali language at their workplaces. The speed of this influence forces the general Rohingya refugee community to use these mixed tongues even in their homes, as well as in their mutual communication with friends and relatives in their daily lives.


There are multiple factors in losing the originality of Rohingya oral language, and the Rohingya refugee community is gradually forgetting their own language. Thousands of Rohingya refugees who have been living in Kutupalong and Noyapara refugee camps since 1993 have almost completely adapted to life in Bangladesh. They speak the same tongue as the Bangladeshi host community and wear the same style of clothing. There is little cultural difference between them today. This exemplifies the final step in the destruction of the Rohingya language and identity that U Ne Win began in the 1960s.


The worst thing is that the NGOs and agencies that operate in the refugee camps seem blind to this loss; some NGOs and agencies have been using this mixed language in awareness raising campaigns for Rohingya refugees in Cox’s Bazar. The Myanmar government often accuses us of being Bengali, saying that we migrated to Myanmar illegally. One day, we will return to our homeland in Myanmar. But returning with this mixed tongue and mixed culture will give validity to those who say that we are simply illegal immigrants from Bangladesh and will make our lives difficult in new ways. In terms of our identity, Rohingya have lost almost everything. Our oral language is the last piece of identity we have. Maintaining this identity is the greatest concern for us now.


On March 21, 2019, my friends and I established Art Garden Rohingya, an online platform that has been documenting and reviving Rohingya culture, language, literature, and art. We have hundreds of budding Rohingya artists, including several women, who write poetry, draw paintings, and sing songs in Rohingya. In the Rohingya diaspora community, there are several movements and developments related to revitalizing the Rohingya language. And today we have two modern Rohingya scripts: Hanifi Rohingya and Rohingyalish.


The United Nations Universal Declaration on Human Rights has been translated into Hanifi Rohingya and there are some dictionaries and exercise books in Rohingyalish. In the refugee camps at Cox’s Bazar, my friends and I are coordinating the Rohingya Language Preservation Project. We are documenting those mixed languages that Rohingya refugees now speak and are raising community awareness about the importance of maintaining the Rohingya language. This is just the first step in a journey of a million miles.


— Mayyu Ali (Rohingya) is the author of “EXODUS: Between Genocide and Me.” He is a poet, human rights activist, and humanitarian worker. He has written op-eds for The New York Times, Washington Post, TIME, Financial Times, Asia Times, CNN, The Independent, Al Jazeera, and Dhaka Tribune, among others. He is the co-founder and editor at Art Garden Rohingya.

All photos by Mayuu Ali.