Land is the Basis of our Lives: Gina Brooks 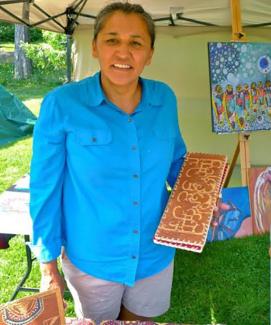 Gina Brooks is a Maliseet artist from the St. Mary’s First Nation in Canada. She works in several media, including lithographs, painting, pen and ink, basket making, and Wampum jewelry making, continuing in the footsteps of her grandfather and mother. Her work captures the stories of Canadian Aboriginal people and their connection to the land. Her ancestors depended on the land, basketry, and art to provide for their families. Brooks taught herself to weave by watching her father and grandfather. She continued training with local artists and elders in the community and received formal training at the University of Maine.

Brooks’ Indigenous philosophy greatly impacts her art, and vice versa. As an artist she says her work “enhances the relationship to the land and deepens our relationship to ourselves.” The motivation behind her artwork is pure love for what she does, as well as a feeling of responsibility to maintain tradition.

Brooks sees art as both a way of life and a skill that contributes to the enjoyment of life. “In our modern day economy, we forget that the land is the basis of our lives,” she says. She remembers lying on the ground as a young girl and how being close to Earth fed her spirituality and built her ‘Indianness:’ “I am very much an Indian. I have lived and experienced the life I have as a brown woman.” She chooses not to contain her experience in such a definitive title as ‘artist;’ rather, she enjoys her life through art and believes that one’s relationship with the land is as important as our relationship with ourselves.

Brooks describes her process as “emotional painting,” saying she feels an emotion or a story inside of her and the work draws itself through this process. “I look for a lot of shadows or light in the images and I have this conversation with myself or with the being, and ask, ‘who are you?’ And [my work] comes through that way.” Brooks believes that too often, people wait for external influences for art rather than finding the artistic inspiration within themselves. Her art is about highlighting traditions and teachings as well as what hasn’t been said.

As an Indigenous woman, Brooks says, “I own a responsibility to take care of the land. This is the message that comes through in my artwork.” The biggest issue she sees with First Nations people today is that they do not take their responsibility seriously as parents, mothers, and community leaders. “I think we have come to a place where everyone softly touches on issues rather than being matter-of-fact,” she says, adding that she worries that ceremonies have eroded because “[we] don’t hold the bundle as sacred as we should.”

Brooks’ life experience has taught her to acknowledge and appreciate abundance in her life. She believes that it is important to know that we have enough. Through her art she has been able to build a world that people can step into seamlessly and feel at home. She feels that Cultural Survival Bazaars are a direct action that change communities and people’s lives on a small scale with a big impact: “I think Cultural Survival does really important work. When I went [to the Bazaar] and saw all those people . . . you know it is making a difference in people’s lives."