It Is Normal for People to Live Across Borders: Raja Devashis Roy 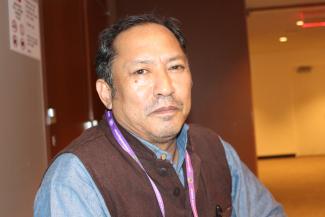 What is territorial integrity? And what if Indigenous people cross here and there or have relatives on both sides of the wall—is that a security issue? It is very common, very normal for people to live across borders, to have relatives across borders, to have contacts, cultural links. It will take 20, 30 years in South Asia, but ultimately I think States will realize that there is a need for that.

Indigenous Peoples have in some cases migrated beyond the borders, but not in such a large scale as non-Indigenous people. You can see the Indian-Bangladesh border issue: some people have migrated and are practicing shifting cultivation between India, Myanmar, and Bangladesh. Farmers sometimes don’t even know when they cross the border by cultivation because there is no clear border boundary pillar. ILO Convention 169 recognizes the rights of Indigenous Peoples to maintain sociocultural contexts across the borders, and the UN Declaration also does that, but most of our governments in South Asia have not implemented this. Southeast Asia is a little more relaxed, but still not like Latin America, where border controls are more relaxed.

Indigenous Peoples are losing their identity and their language. The second generation are not speaking their languages. In this new place, their food, their clothes, their literature and music is changing. It becomes a struggle. In many cases, these people are going to lose their identity. They will remain Indigenous; once or twice a year they will observe the special days and wear traditional clothing and put up photographs on Facebook. But for the rest of the 364 days, what happens? Will they be living in a way they would like to live, where they can feel comfortable and practice their spirituality, their music, literature, and culture?

Language rights have been clearly recognized in the UN Declaration on the Rights of Indigenous Peoples, both as a collective right of a nation, but also as an individual right. In the Convention on the Rights of the Child and ILO Convention 169, the right of a child to speak his or her mother tongue is guaranteed. Even where we are staying in our ancestral territories, many of us are losing our languages. My concern is not just the death of a language; it’s the morbidity of a language. Before, you used to speak 100 percent or 95 percent using your language. Now it’s maybe 10, 15, 20 percent.

I am concerned about Indigenous Peoples, about our identity. [But when] I see the youth, I also feel confident. They have the energy, they can dream. They must also learn from the older generations and from their heritage, their traditions, their customary law, their spirituality, their links with ecology and nature. I hope that this transmission of traditional knowledge is passed on as much as possible in the right way to the youth, to the next generation, so the youth can go on using modern technology and all the advantages of social media and science and technology, but retaining the ethos and identity of Indigenous Peoples.