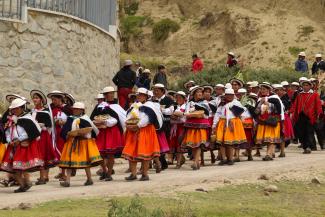 Cultural Survival’s Keepers of the Earth Fund is supporting Instituto Superior Pedagógico “Quilloac” Bilingüe Intercultural’s project on strengthening the ancestral language Kichwa Kañari through the use of interactive materials, including mobile apps designed for children ages 3 to 5.

The community of Quilloac is located 20 minutes from the urban center of Cañar Canton in Ecuador. Based on archaeological remains, Quilloac is said to be the area where the Kañari culture was born. Kañari are an Indigenous Peoples who have traditionally lived in the modern provinces of Azuay and Cañar. Our mother tongue is Kichwa, which is part of the intangible cultural heritage of Ecuador. Although Kichwa is one of the most widely spoken languages in South America, it is considered an endangered language due to its many dialects.

Through the constant efforts and support of leaders and community members, the Instituto Superior Pedagógico “Quilloac” Bilingüe Intercultural was founded to protect and revitalize the ancestral Kichwa Kañari language, a dialect of Kichwa. Since 1996, when we began conducting research, we have noticed a lack of interest of children and young people in the use of their mother tongue in the community. The decline has to do with the excessive migration of parents abroad, along with globalization and mainstream media. Many parents give greater importance to the English language because they think it is better for job opportunities.

In recent years, technology, specifically smartphones, have become an indispensable tool for the inhabitants of the Quilloac community. Most applications are configured for use in Spanish and English, which further minimizes Indigenous languages and the interest in maintaining them. As a father, I have observed how my 3-year-old son, as well as my nephews, neighbors, and fellow community members, are attracted to the games installed on their phones. As a teacher in the community, I see every day how children respond to animated cartoons designed by for profit companies. We must be aware that by using these devices, stereotypes of ideologies different from our reality are reinforced.

With the goal of generating renewed cultural pride in our children and reinforcing the need to speak Kichwa, I started a research unit to create an animated character that will be used in a radio and television series, as well as other interactive media such as a mobile game. Members of Instituto Bilingüe Quilloac will create an app for mobile phones that teaches the Kichwa language to 300 children ages 3 to 5 in a fun and captivating manner. The children are excited to know that the character will dress in their native clothing. What they have not been told is that the dialogue of the characters will be in Kichwa—we want that to be a surprise.

For the first time, children will be able to have a smartphone with interactive games in their mother tongue, with characters and landscapes that identify them, generating curiosity and motivation to resume the use of the Kichwa language. We want to influence the recovery of their self-esteem and pride of belonging to the Kañari culture. We also want to raise the world’s awareness of the process of extinction threatening the Kichwa language, and to highlight our experiences and traditions in order to give renewed relevance and status to the Quilloac community.

We thank Cultural Survival for considering and helping to activate in our community the recovery of ancestral wisdom. By stimulating interest in the Kichwa language into the community’s youngest demographic, Comuna Instituto Bilingüe Quilloac hopes to implement a rebirth of the Kichwa Kañaris’ ancestral language and traditions.