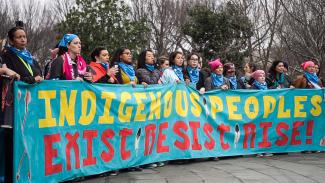 On January 21, 2017, a half million people, predominantly women, took to the streets in almost every major U.S. city, and several more around the globe, for the historic Women’s March. They came to protest the new Trump administration and its war on women’s rights, the environment, racial and ethnic minorities, freedom of religion, and freedom of speech, to name but a few.

For me personally, the March on Washington centered on the Native women gathered in front of the National Museum of the American Indian as part of the Indigenous Women Rise movement. Early in the morning, Indigenous women formed a circle, praying together, getting smudged, dancing, passing out free turquoise scarves and posters, talking, sharing stories, and informing the growing crowd gathered with them about issues that are pertinent to Native American women in the United States and Native Peoples in general in all of the Americas. Several women wore silk turquoise scarves designed especially for the march by fashion designer Bethany Yellowtail (Crow/Northern Cheyenne). Many participants spoke of the sense of inspiration they felt by being able to voice their opinion in a large group that had similar viewpoints within the Indigenous women’s realm. One participant reminded us that “an attack on our lands is an attack on Indigenous women’s bodies,” referring both to historical policies and new ones being drafted by the Trump administration.

Of course, the viewpoints of the marchers were as diverse as the women themselves. For D.C. marcher Ani Begay (Navajo), “I decided to march to denounce the racist rhetoric that has been spewing from the lips of the person some call our President. It’s embarrassing, ignorant, and such a step back from how far we’ve progressed. I march for my rights not just as a woman, but for Indigenous rights too. It concerns me that Trump claims climate change is a hoax. It is also scary that he wants to privatize reservations when the reason is so transparent with the new head of the EPA, Scott Pruitt, saying how we have valuable resources untapped. They have no regard for sanctity of the land. It is only about dollar bills to them. I marched for our Mother Earth, for Native treaties and sovereignty and rights. I marched for my children and for seven generations out.” Chrissie Castro (Navajo) of Native Voice Network and Advance Native Political Leadership, gave her own reasons for participating: “Native American Tribes and communities are at risk of losing the gains and advances made in Native American rights over the past several decades. A short list of rights and policies at risk include the Indian Health Care Improvement Act, the Indian Child Welfare Act, the Violence Against Women Act, the Indian Religious Freedom Act, the protection of sacred sites, and the continued struggle for protection of our land, air, and water. For these reasons and more, we felt it critical that Indigenous Women’s leadership proactively address what these policies mean for ourselves, our children, and our communities. We also believed that we needed to gain visibility and counter the continued erasure and invisibility of our peoples.”

Indigenous women were present in the resistance all over the country, affirming that we are still here and fighting for our rights. Many cities invited Native women to be part of the official programs. In Washington, D.C., Judith LeBlanc, director of Native Organizers Alliance, and LaDonna Harris, president of Americans for Indian Opportunity, spoke at the main rally while Jennifer Elizabeth Kreisberg of Ulali, a First Nations acapella trio, sang. In Boston, organizers invited Love Pegan Richardson (Nipmuc), Leslie Jonas (Mashpee Wampanoag), and Claudia Fox Tree (Arawak/Yurumein) to speak. Savannah Fox Tree McGrath (Arawak/Yurumein) sang Amazing Grace in Cherokee.

Reflecting on the experience, Castro recalls, “Indigenous Women Rise marched with hundreds of thousands of women, men, and children to stand for justice in Washington, D.C. As we made our way through the shoulder-to-shoulder crowd, we began to sing the women’s warrior song, which is about strength, determination, and love for our people. As we marched down Constitution Avenue, we were confronted by thick crowds. There were a few times when the crowd instinctively opened to make way for us, asking, ‘Are you leading the march?’ People cheered, many had tears, some sang with us. It was a rare moment of visibility from our sisters and allies; to be seen for who we are, the medicine we bring, and the ancestors that were walking with us. We marched with dignity, knowing we are protecting Mother Earth, our communities, and our peoples. We were telling the world: We exist, we resist, we rise.”

We also marched to bring attention to the disparities we face. As Native people in the U.S., we experience violent crimes at rates far greater than the general population. We are three times more likely to be killed by police than white Americans. Four in five Native American women will experience violence in their lifetime, and these acts of violence are committed by non-Native men most of the time. Over 26 percent of Native people live in poverty, compared with 13 percent of the general population. Boston Indigenous contingent organizer and marcher Bree Herne (Akwesasne Mohawk), in a statement, reminded people that, “As Native women, we are canaries in the coal mine when it comes to injustices that happen here on Turtle Island. It is important to recognize that Indigenous women have been the roots of this movement since the very beginning.The Seneca Falls Convention was the first American women’s rights convention and stated if Iroquois women could be equal partners with men, then so could white women. Suffragists in 1848 looked to Iroquois women for inspiration in seeking women’s rights. Elizabeth Cady Stanton and Matilda Joslyn Gage, both leaders in the American women’s rights movement, specifically described ‘the greater rights of Iroquois women as proof that the subordinate position of white women was neither natural nor divinely inspired.’” 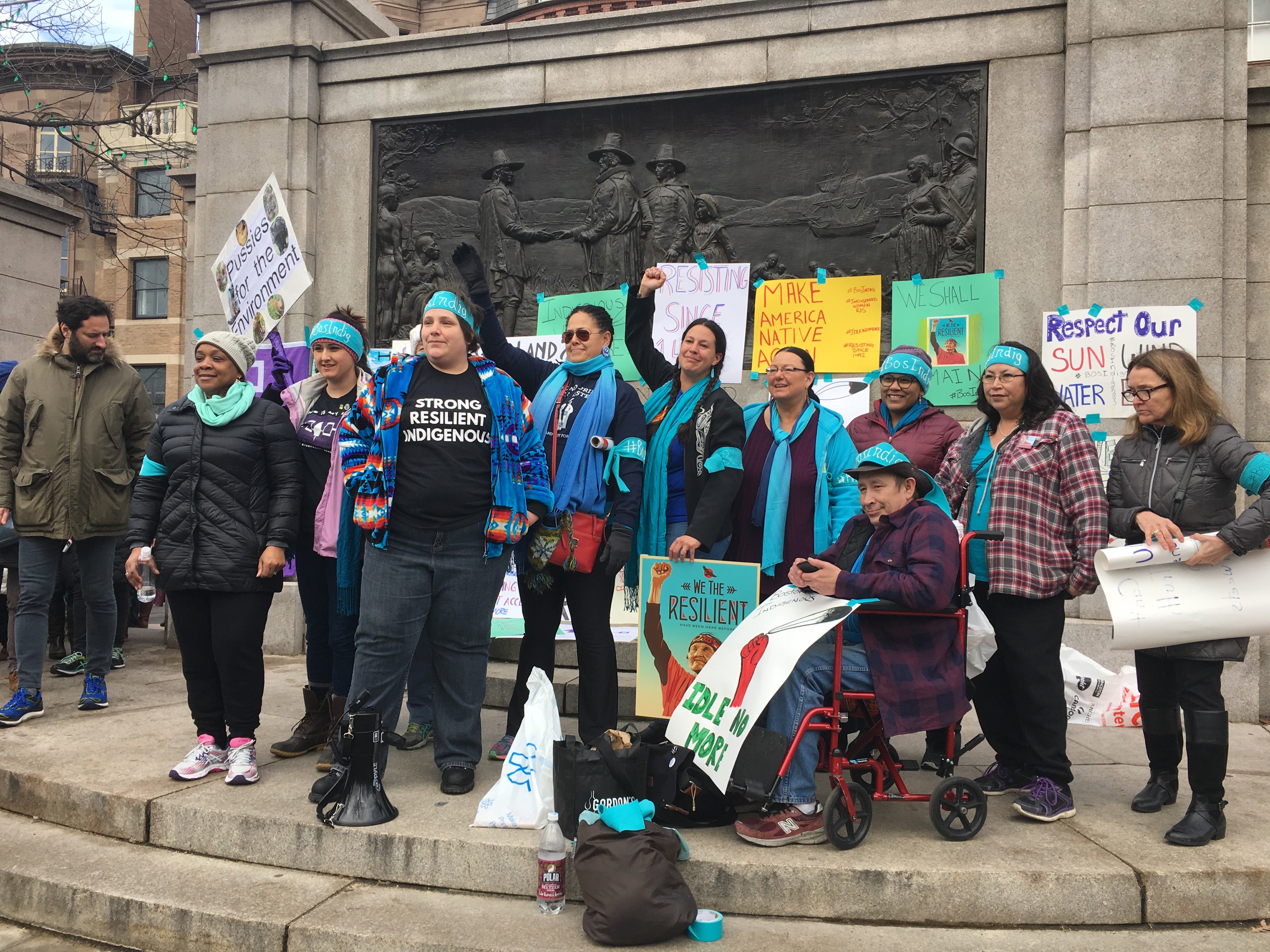 After the morning gathering in front of the museum, the group joined the thousands of other marchers carrying two colorful banners, “Indigenous Peoples Exist/Resist/Rise” and “Indigenous Women Rise.” The march was electrifying, and Indigenous Women Rise hosted a followup meeting the next day with more than 50 Indigenous women in Washington, D.C., to talk about what’s at stake for our communities in this new political era. We began work on an Indigenous women’s platform, talking about collective action and building more solidarity across communities. According to Castro, there is a plan “to continue to build a network of Indigenous women throughout the country to be able to organize and resist against this administration.”

Other participants spoke of implementing the aims of the march by making daily calls to senators and representatives to protect civil liberties, along with voicing needs for change to the new administration in regards to Native issues like Tribal sovereignty, self-determination, representation, education, healthcare access, violence against women, violence against the Earth, solidarity with all marginalized groups, protection of Native territories, extractive industries, food sovereignty, water, and the protection of sacred sites. As Indigenous women, we rise, we resist, and we work towards the fulfillment of our inherent rights.

—Phoebe Farris, Ph.D. (Powhatan-Pamunkey) is contributing arts editor for the CSQ. She is a professor emerita of Purdue University and is currently teaching at the Corcoran School of the Arts and Design at George Washington University.

Photos:
Before the Women’s March on Washington, Indigenous women from across the country gathered in front of the National Museum of the American Indian as part of the Indigenous Women Rise movement. Photos by Jamie Malcolm-Brown.

In Boston, the #BosIndig contingent was vocal at the Women’s March for America. Photo by Agnes Portalewska.