For the Indigenous Economy, the Forest Is Life 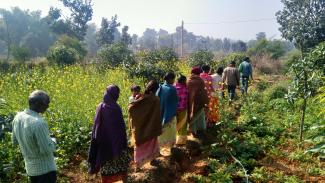 Our early ancestors left behind a far-reaching worldview and an idea of diversity to live in coexistence with nature. This worldview impels each Indigenous person to internalize traditions, customs, culture, and language of the community and also to preserve, broaden, and enrich the same. By doing so, we not only ensure self-reliance and sustained development of the community, but more importantly, we take the responsibility to impart that worldview to the larger community and future generations. Today, the biggest challenge for Indigenous Peoples all over the world is the unrelenting assault on Indigenous lifeways and resources in the name of national interests and development by governments and capitalist forces. For Indigenous Peoples, resistance is ingrained in our struggle for survival.

Our ancestors put in place some binding practices on the collection and usage of forest produce. Without these practices, forests would look like merely a resource for eking out a living. An Indigenous person’s identity right from birth is linked with the Gotra (lineage or totem) of the family. It is the obligation of the person to protect that particular tree, plant, creeper, or animal. In no circumstances may one cause any harm to it.

Another significant aspect of the Indigenous life is festivals and ceremonies. In each season of the year, nature is worshiped in various forms of deities. In these ceremonies we thank nature, as it ensures food security throughout the year and provides a spiritual home. This practice ensures that forest produce and animals are not consumed during the flowering or breeding time. These rituals also remind the community not to use any resource beyond their need, ensuring that the economy of the community stays robust without destroying nature.

Some festivals are performed within a community, and some are performed collectively involving all Tribes. One example is the Sarhul festival, in which the Sal tree is worshipped. Communities are prohibited to use any fruit, flower, or leaf that grows during the summer season until the Sarhul is performed; by the time the Sarhul is over, the flowering/breeding time would also be over. The Sendra (hunting) ceremony is performed once a year just before the Sarhul. In Sendra, all the youth of the community, led by the community teacher, go into the forest for a week. Besides hunting, the group learns from the teacher all the behavioral and customary wisdom passed down through generations. They also learn how to identify medicinal herbs, how to prepare traditional medicines, and how not to over-extract the resource. During the Sendra, the youth take a vow to stay faithful, responsible, and committed to the community and to their ancestors.

The method by which medicinal herbs are collected is another example of Indigenous Peoples’ protection of nature, and in turn, our own economic stability. In order to collect an herb in the forest, some communities have ordained that the person collecting must be naked at the time of extracting the material, otherwise the medicine would not work. This belief is enforced upon the people simply to restrict overuse of the product. The person extracting the herb would like to do it quickly before someone sees him or her, and therefore would not be able to extract too much of it beyond the need.

The idea of diversity and equality as passed on to us from our early ancestors does not contain the concept of Shubh-Labh (“luck and profit,” as is prevalent in Hindu culture), nor does it give importance to weights and measures. However, we need to employ some calculations in order to present ways of transaction in the Indigenous milieu to the non-Indigenous world. In the economics of an average 5-6 member Indigenous household here in eastern and central India, 65 percent of our share in well being comes from forest produce alone. India’s forests support the life of humans, animals, and other living beings by providing fruits, flowers, roots, grass, honey, herbs, and medicines, among many other things. The economy and trade of Indigenous communities are intrinsically linked to forests and forest produce (see sidebar).


Indigenous Peoples’ economies are intrinsically linked and interdependent with our social and cultural systems. If it were broadly adopted, this model of socio-economic living would help the world achieve the chimera called “sustainable development,” and would also provide potency to humankind to fight pandemics such as COVID-19.


The challenge before Indigenous communities is that today, governments and corporations are hellbent on destroying the homes and habitats of Indigenous Peoples by bringing in big industries and development projects. Not only are Indigenous Peoples being massively displaced from their natural homes, but thousands of square kilometers of primary forests are being ravaged as well. Indigenous communities see this neoliberal model of development and economics as nothing but a model of plunder and destruction. That is why we consider our fight to protect our forests, water, and land inherited from our ancestors no different from our fight to protect our identity and existence. The fight is on. 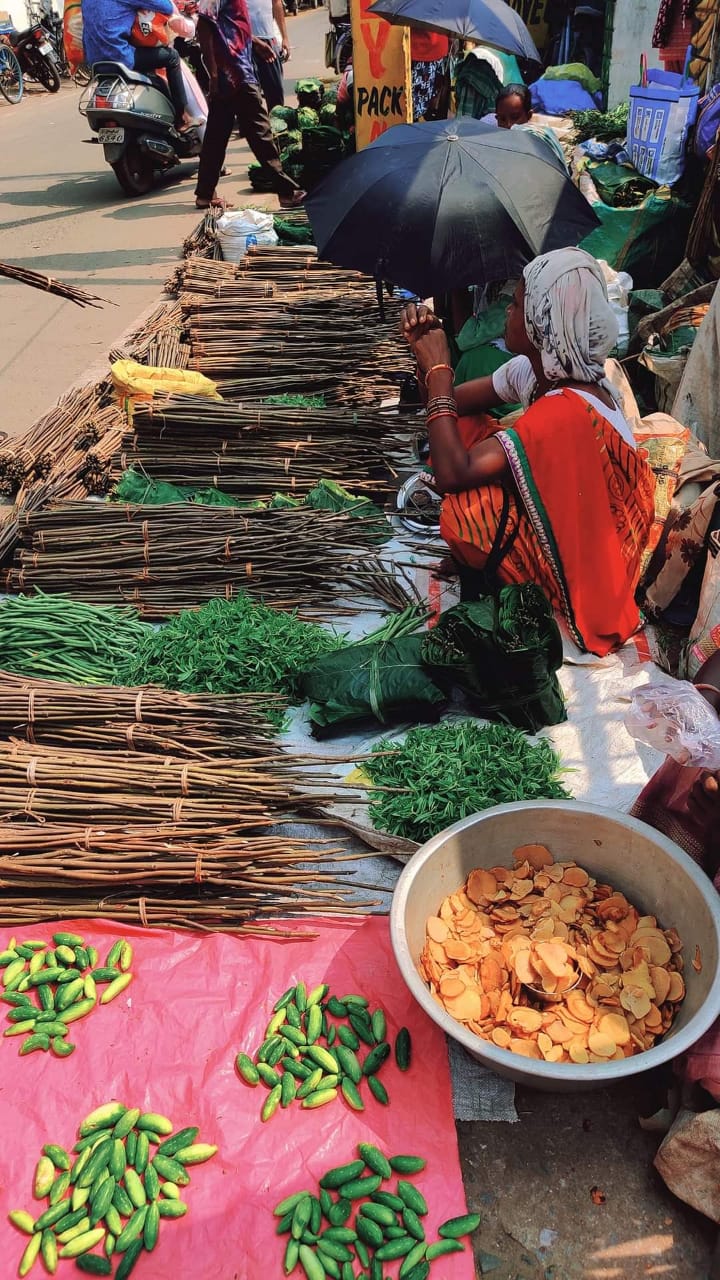 Mohua (honey tree or butter tree): Mohua flower is used as food and also in making alcohol. Each household collects 700–1,000 kg of Mohua flowers and earns about $700 USD every year. Indigenous communities also collect the Mohua seeds from the fruits to extract edible oil, which saves them from buying oil from the market. Mohua seed is used in making medicine.

The Sal tree: The Sal tree (Shorea robusta) is fundamental to the lives of Indigenous communities. Among all types of forest, the Sal forest is regarded as the most conducive to all living beings, as it always contains rich biodiversity. Seed of the Sal tree is also deeply linked with the Indigenous economic system.

Bamboo: Indigenous Peoples are dependent on bamboo for making and repairing houses, crockeries, implements, and other essential objects. An average Indigenous household accesses bamboo from the forest worth between $75-150 USD per year.

Tendu leaves: Leaves of the Tendu (East Indian Ebony) plant keep alive a large industry in India in which Bidi (leaf cigarette) is manufactured. Since the plants are only available in the forests where Indigenous Peoples live, Indigenous communities have been given the rights to collect the leaves and sell them to contractors and government corporations. This activity is one of the most important parts of the Indigenous economy.

Lac: People cultivate and collect lac from trees and sell in the local market for $3– $7 USD per kilogram, which substantially addresses economic crisis in lean periods.

Fruits, roots, and vegetables: The forest is full of fruits, roots, and vegetables that make up the lifeline of Indigenous communities. The most important among them are Aonla (Indian gooseberry), mango, Jamun (Indian blueberry), Piyar or Char (Buchanania lanzan), Indian plum, Harra (chebulic myrobalan), Behera (beleric myrobalan), Genthi (forest potato), white muesli, and myriad types of leaves and mushrooms.

Medicinal herbs: Medicines prepared from herbs easily available to Indigenous communities cure many diseases and effectively address healthcare of communities. Indigenous Peoples use these medicines to cure paralysis, tuberculosis, cancer, infertility, diabetes, and polio. Even when modern pharmaceutical medicines do not work, these traditional medicines can work wonders.

Munjani: Also known as Kujur, this is the fruit of a rare creeper out of which Indigenous Peoples extract an oil that is used in the preparation of several medicines.

Gum: Indigenous people collect gums from various trees and sell them in the local market. As these gums are in big demand, they add to people’s income handsomely.

Rope: In the states of Jharkhand, Chhattisgarh, and Odisha, there is an Indigenous community called Birhor (literally meaning “the forest people”) whose primary occupation is to make ropes using natural resources and to collect honey from the forest. The Birhor Tribe has been officially listed as endangered.

Honey: Collecting honey from the forest and selling it locally makes up a substantial part of the Indigenous economy. Almost all Indigenous groups perform this activity, and it is the primary occupation of the Chenchu Tribe in the states of Andhra Pradesh and Telengana.

Fodder: Livestock rearing is an economic mainstay. Indigenous Peoples do not have to depend on the market for fodder for their livestock; they get it from forests and commons, which provides economic stability and self-reliance.

— Philip Kujur is a Kudukh (Oraon) Tribesman and activist from Jharkhand, India. For more than 25 years, he has been working for the rights of Indigenous communities. He is the convener of Adivasi Activists’ Forum for Indigenous Rights (AAFIR). The article was translated from Hindi by Subrat Kumar Sahu.

Top photo: Heading through farms and forests on a winter morning for a community meeting, Jharkhand, India. Photo by Mithilesh Kumar.