I Sing What’s Inside Me: Jennifer Elizabeth Kreisberg 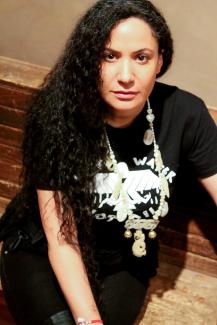 Singer, composer, and activist Jennifer Elizabeth Kreisberg (Tuscarora of North Carolina) comes from four generations of singing sisters on her maternal line. Her fierce and passionate vocals have appeared on soundtracks for movies such as Smoke Signals, Unnatural and Accidental, The Business of Fancydancing, Elijah, Follow Me Home, and on the television series, The Native Americans, in a newly released documentary “Rumble: The Indians Who Rocketed the World.” At age 17, Kreisberg became the youngest member of Ulali, the critically acclaimed female acapella trio, who have brought Native music to venues such as Woodstock 1994, the 1996 Olympics, and countless international festivals. Recently Kreisberg performed at Cultural Survival’s summer Bazaars in Plymouth, MA and Tiverton, RI.

“I sing what’s inside me. If something bugs me I sing about it. Everything inspires me. It’s what I feel inside and what I see,” Kreisberg says. She cites Mariah Carey, Aretha Franklin, and Chaka Khan as her contemporary vocal influences, and names her family as her biggest source of influence in pursuing music. Singing in various Native languages, including her traditional Tuscarora language, many of Kreisberg’s songs address Native life. In collaboration with Métis/Dene writer Marie Clements, The Road Forward film features lyrics that shine light on the crisis of missing and murdered Indigenous women in North America, “I feel your breath, I know your pain, I hear you cry. We carry the load together, you and I. . . .”

The spiritual song, Wah Jhi Le Yihm (I Carry You With Me), which Kreisberg co-composed with Ulali for the film Smoke Signals, similarly uses emotionally charged vocals to tell the stories of her people. Kreisberg joined Ulali full time a few years after its initial founding.after singing with a Connecticut-based drum group as a teenager. Kreisberg, her cousin Pura Fe, and the group’s other co-founder, Soni Moreno gelled to become the household name of Ulali. With performances at the People’s Climate March in New York City, the Native Nations March on Washington, D.C. to support Standing Rock, and in Native communities across the U.S. and Canada, Kreisberg and Ulali have been using their talents to support Native voices, initiatives, and struggles for almost 30 years.

Kreisberg has won many awards for her music, including the Native American Song of the Year Music Award in 2007 for her single, Have Hope, which will be included in her soon to be released solo album, Wah Thye Yeh Rak (She Mixed It). She is currently working on multiple projects that continue to bring to light Native American issues. “I’m still working on my next album, but there’s light at the end of that tunnel,” she says. “I’m working on a film now called Dawnland, about the first Truth and Reconciliation Commission in the U.S. It’s about the Penobscot and Passamaquoddy folks; I was graciously brought in to do the soundtrack for that film.” Dawnland documents the tragic forced removal of Indigenous children from their families in Maine—a practice that still continues today—and the consequences the events have had on individuals struggling with the resulting trauma, guilt, and loss, along with the establishment of the Maine WabanakiState Child Welfare Truth and Reconciliation Commission.

Recently Kreisberg worked on another documentary by Marie Clements called The Road Forward, released earlier this year in Canada, about an Aboriginal movement that started with a battle for fishing rights in British Columbia and featured the work of the British Columbia Native Brotherhood and The Native Voice newspaper. “I did most of the music for that movie and I was in it for some of the musical parts. A whole movement happened there that none of us knew about; I learned a lot working on it,” she says. The film connects First Nations activism of the 1930s with activism today, while showcasing Native vocalists and musicians.

With movies like The Road Forward and Dawnland, Kreisberg uses her musical talents to raise awareness about Native struggles both contemporary and historic. She also serves as a board member for Honor the Earth, a Native-led organization established by Winona LaDuke and the Indigo Girls, Amy Ray and Emily Saliers, to address the two primary needs of the Native environmental movement: “the need to break the geographic and political isolation of Native communities and the need to increase financial resources for organizing and change.”

It was through a benefit concert for Honor the Earth that Kreisberg and Ulali got the opportunity to collaborate with Sherman Alexie (Spokane-Coeur d’Alene), the acclaimed Native American novelist, screenplay writer, and filmmaker, known for works that tell the stories of life on Indian reservations. “We did a benefit for Honor the Earth, and Sherman Alexie, who wrote the screenplay for Smoke Signals, was there. He saw us sing and we befriended each other and kept in touch. He said he needed some music, so he asked us to compose a song for the end of the film, to sort of wrap up the film. He wanted it to be women’s voices and he wanted it to be strong. It took us almost 24 hours. We didn’t really take any breaks. We just kept watching the end of the movie over and over.” Their song, titled Wah Jhi Le Yihm (I Carry You With Me) in the Tutelo language, appears at the end of the film. Released in 1998, Smoke Signals holds the groundbreaking distinction of being the first film written, directed, and co-produced by Native Americans. Kreisberg later appeared in, and contributed music for Alexie’s subsequent film, The Business of Fancydancing.

Kreisberg has been acknowledged throughout Indian Country for her achievements as a traditional Native singer and hand-drummer. She was the recipient of the Eagle Spirit Achievement Award from the American Indian Film Institute in San Francisco, a winner of the Native Women’s Recognition Award, a Genie recipient (a Canadian award akin to the Academy Awards) for her song Have Hope, and has also been presented with the key to the city of Greensborough, North Carolina. At the historic Women’s March on Washington, D.C. on January 21, 2017, she sang the opening song, reminding all of the need to recognize and include Native women. When asked if she tries to make crossover songs in her traditional language, she responded, “I don’t. It’s not a goal of mine. If anything I do or I’m a part of gets out there, it’s just sheer luck.”

Kreisberg also has a long history of collaboration with fellow musicians. She was recently featured on a song called The Muse, in collaboration with Canadian electronic dance music band, A Tribe Called Red. “I got to be one of the many features on their last album and it was a lot of fun to sing on that type of music,” she says. “They gave me a track and said, ‘do whatever you want,’ and I brought them a love song in English. They were totally supportive of that. They are good guys and always make a safe space for us women at their shows, good homies.”

Hear Jennifer Kreisberg’s music and see her most recent projects on her website: www.jenniferelizabethkreisberg.com