Here We Are: Reclaiming Indigenous Identity in America 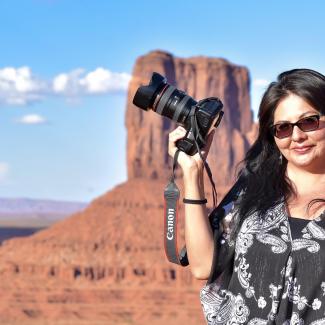 A Diné multimedia documentarian, photographer, and poet, Pamela J. Peters of Tachiinii Photography has been taking photos for as long as she can remember. Her work, which she calls “Indigenous Realism,” aims to challenge viewers to question mass media stereotypes of Native Americans and to think critically about who contemporary Indigenous people actually are. Her photography has been featured at the Los Angeles Center of Photography; Arts District Los Angeles Photo Collective; These Days Gallery; Venice Arts Gallery; Triton Museum of Art; and in 2021 at the Getty Museum as well as in the Los Angeles Times, Reuters News, Cowboys & Indians Magazine, Native Max Magazine, Los Angeles Magazine, Pasadena Magazine, Indian Country Today, Real Indians, American Indian Quarterly Journal, and many more. Peters belongs to the Tátchii’nii clan (Red Running into the Water) and currently resides in Los Angeles. Cultural Survival recently spoke with Peters.


Cultural Survival: Tell us about your photography. What do you focus on?

Pamela Peters: I mostly take portraits with a narrative of my participants. Lately, however, I’ve been taking photos back at home [Navajo Nation]. Through the decades, I’ve been capturing how the landscape has changed. It just feels like it’s a land that’s dying now. I remember running through the mountains when we would visit some relatives, and now, that land is all gone. Where I grew up when I lived with my grandparents, that whole land was open and free and beautiful; now, it’s not as vibrant as it was when I was a kid. My grandfather had an orchard of apple, plum, apricot, and cherry trees. Now it’s dried up land. It’s really sad.


CS: How does being Diné impact what you do as an artist, and how does your role as an artist and documentarian impact your understanding of being Indigenous?

PP: I am viewing things differently through my Indigenous lens. I feel that I have more of an understanding and a way of respecting the people that I am taking photos of. It’s an equal participation between us, and I would never want to go over the boundaries of a person’s space. I get to know who my participants are—there is an engagement that we have, a connection. I like that human connection that we have among each other and I do this in a respectful way, in a human way. Other photographers do it more as a task, like, “Ok, we gotta take these photos, let’s get it done,” and don’t really want to know anything about you. I know that feeling; I remember as a kid living on the reservation, we would sell fruits and vegetables on the side of the road where my grandparents lived, and we had visitors needing to pass our home in order to go over the mountain. A lot of white tourists would come, and they always wanted to take photos of us. They were like, “Oh, look at the cute little Indian kids! Can we take photos of you?”


I’m very thankful to my cousin, who was very protective and aggressive, and he would tell them no. But then he would say, well, you guys are going to use our photos, you’re gonna have to pay us. Some of them paid, but we were always seen as a spectacle to people, and I don’t ever want my images to be seen that way. I know every single person personally in the photos that I take. I do it in a respectful dignified way. I call it my visual sovereignty, to say this is my way of capturing moments and people in photography. But not in a commodified way that a lot of people tend to do. 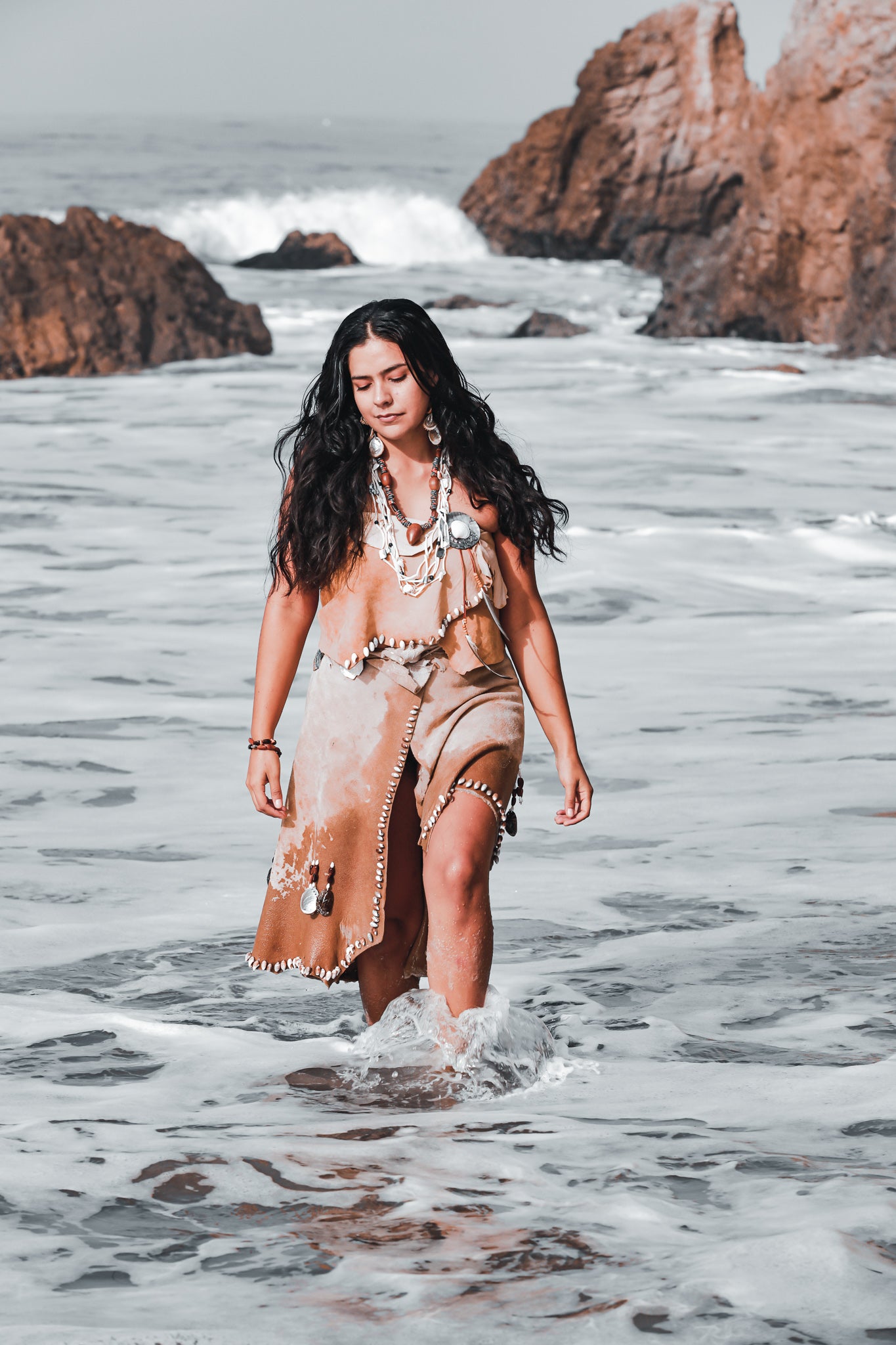 Portrait of Tongva singer/songwriter/poet known as Kelly Caballero, paying homage to her ancestors who are the original people of Tovaangar (Los Angeles, CA). Photo by Pamela J. Peters, tachiiniiphotography.com.

CS: You talk about being a documentarian and having a purpose. Could you explain this a little more?

PP: Being a documentarian is reclaiming and recapturing our voices. I’m not just researching. I already know about our communities. What I am doing is about recapturing and reclaiming what most people identified in this context of Western ideology. That ideology has been identified as documentary. What I am showing is storytelling for the next generation—something that we have done collectively and with the individual’s participation, as opposed to research and observation. I’m one of many Native American cultures, and I am fortunate that I’m learning about other cultures, about their ways and livelihoods. I traveled to South Dakota for the first time about six years ago. It was such an honor to be accepted as part of their community, learning about their history, a little bit about their language, their food, their entire culture. That was such a profound moment for me, because as Plains Indians in the Southwest, we have this connection through Hollywood films. It’s odd, yes, but that was Hollywood. I really wanted to dismantle what was embedded through the visual context of what was taught to me in films, in school narratives. Additionally, I’ve learned so much about other cultures by traveling and being invited to visit the Northwest region, Florida and the Seminole Tribe, as well as learning about the First Nations People and the very similar culture that I have with the Dene Nation in Canada. It’s been an amazing experience. There are things about other Tribal communities that I can’t take photos of that I will love and cherish. 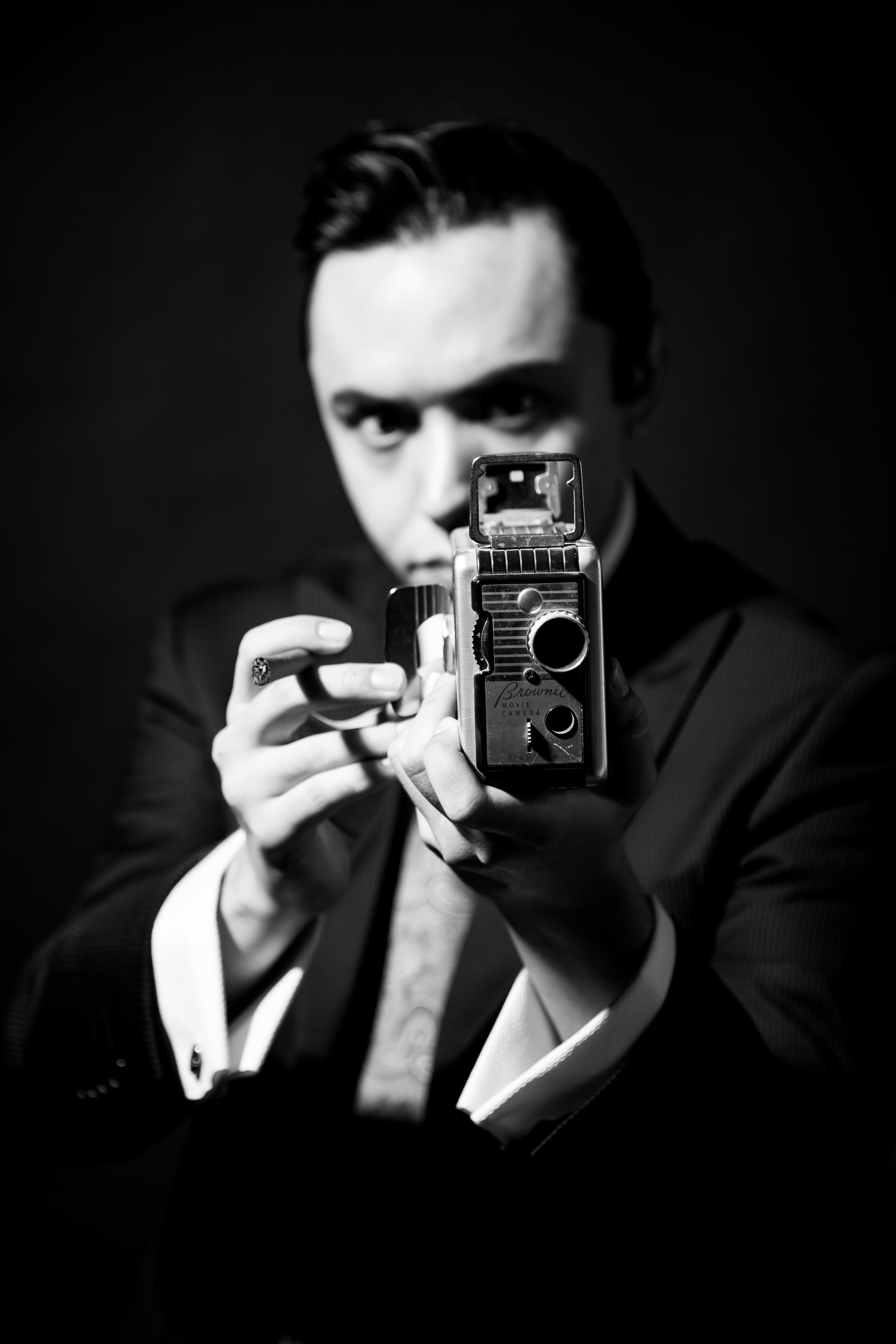 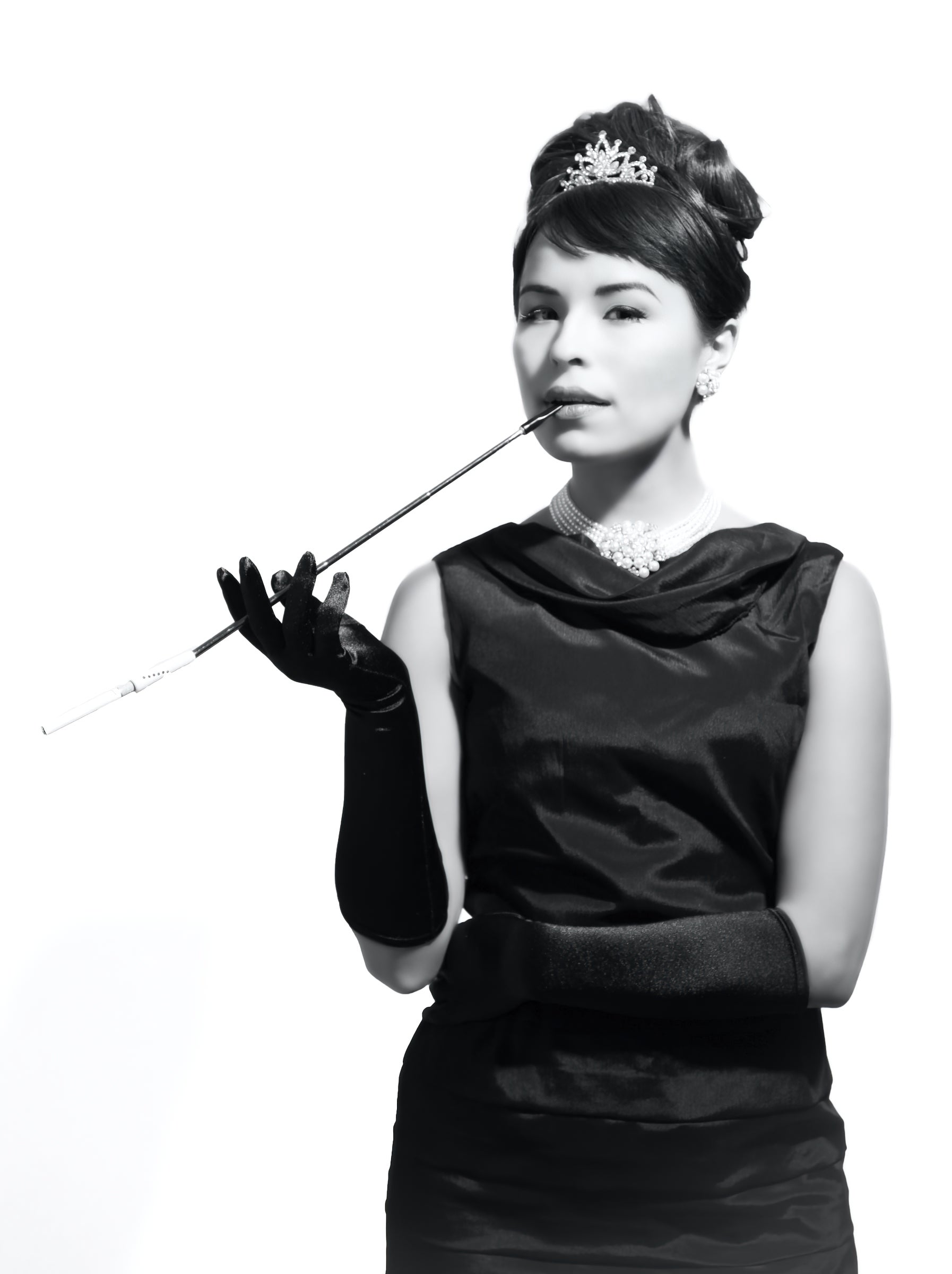 CS: Why did you choose to call your work “Indigenous Realism?”

PP: I use the term “Indigenous Realism” because I’m capturing what is currently happening in our community. We’re not that static Indian that’s still perpetuated in mass media. Just living in Los Angeles, I have to go down this laundry list of my identity: I’m Native American, I’m Navajo, I’m Diné . . . there’s already this preconceived perception of what society thinks of when they think “Indian,” and then when they look at me, it’s like their reality has been shattered. It’s hard for some people to grasp that concept, to see me as a human being. When you experience that over and over again, it does take a toll on you mentally and physically, because you question yourself as an individual, like, am I fitting this persona that people want me to be? Or do I have to? In reality, you just have to be who you are. In a lot of my portraits, they’re regular people who happen to be Native Americans. You don’t see them in Indian attire. You see them as real people, living within their own environment. We’re not running around in our regalia, we’re not wearing feathers in our hair every day. We have this real life. We don’t have to dress up as this perception of what’s been embedded into people’s idea of what they think is an Indian.


CS: How do you think about your identity?

PP: My main identity is that I’m a human being, first and foremost. For so long, we were not viewed as human beings. I just happen to be Diné, I just happen to be a woman, I just happen to be an artist. But first and foremost, I’m always going to be a human being. That’s the thing I want people to understand, that as Tribal people we are human beings, because the narrative and the context of who we are in society is that we don’t exist. That concept still is thriving in our education system, in government policies and in mass media. Before I can dismantle all those labels and stereotypes, I like to go back to the concept to say we are human beings, first and foremost. One question we’re always asked is, “what are you?” We’re even questioned when we say who we are, after that: “I’m Diné.” “What is that?” “I’m Navajo.” “What is that?” “I’m Native American.” “Oh! You are? How much, are you sure?” There’s always that question, like they can’t believe it, because that fantasy has been so deeply embedded into them from school and from the media. Sometimes I have to show them that I am this person. 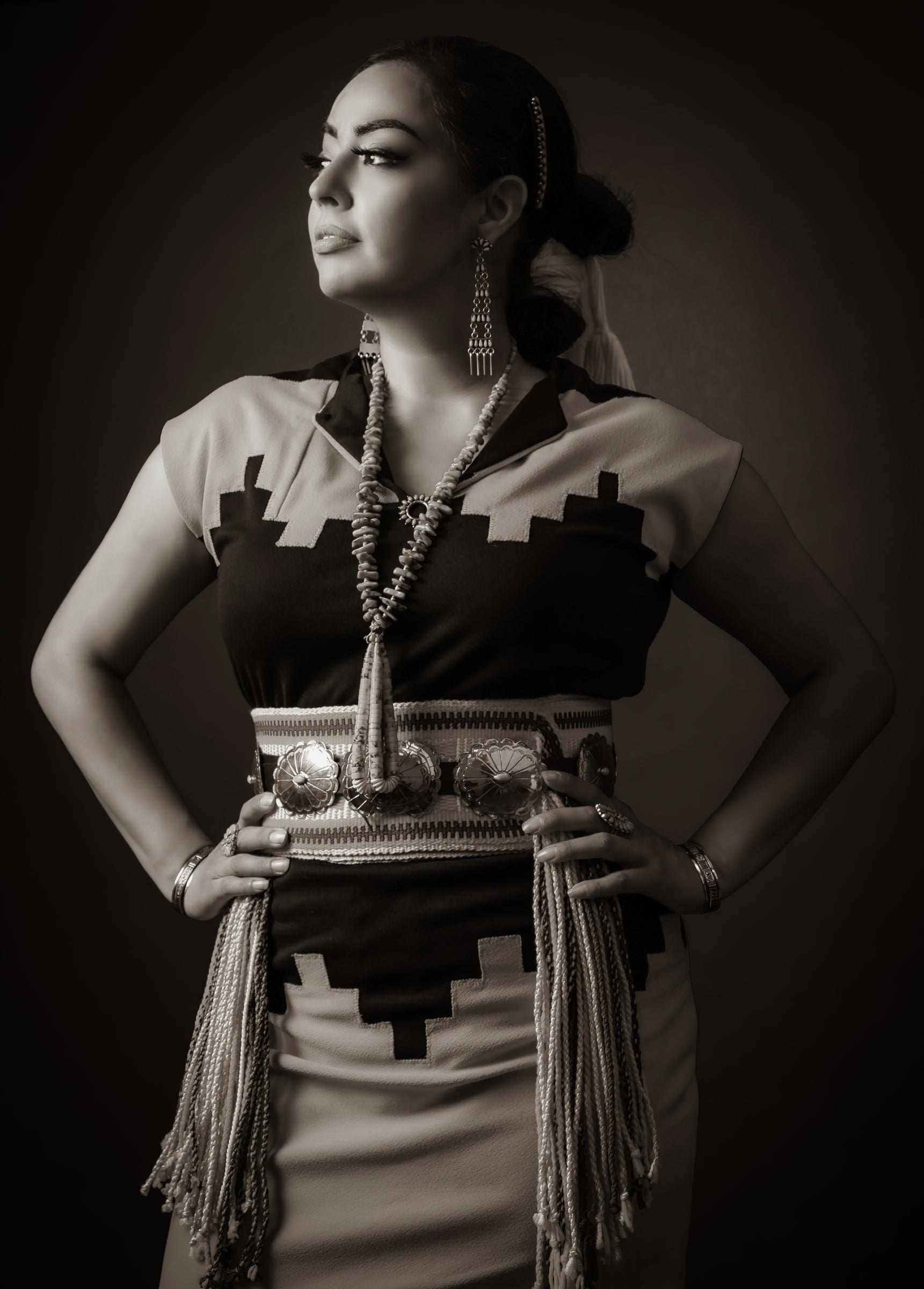 CS: How do you get your message across?

PP: When I first started I thought it was going to be a challenge, but I think most people, if they’re really interested, they’ll look at the context of the social messages in my creative narratives. I want to change the perspective of how people see photography. It’s not just an image; it’s beyond an image. It has a narrative, it has a context, it has culture, it is a contemporary Tribal person. To really engage, you have to dismantle and decolonize your mind and take a moment to really understand it. You have to do that in order to understand us as Native American people. I do that purposefully, in a complex way, because we are complex people. We’re not just this relic, this one static image. I want people to look at my work and ask, What is that? Why is that person in that image placed in a ’50s-style context? Why is he dressed that way? I want them to break down these images I am creating and read and understand the message behind the image.

When I was speaking and sharing my work in Scotland, one of the students asked [why I include people’s names and Tribes]. I said, because I want to show that we are still here, and these people have names, and that these people have Tribal communities that they’re representing as well. When Edward Curtis captured these images, he identified them as “Indian boy,” “Indian girl,” “Navajo girl,” “Navajo maiden.” These are people’s families. These are human beings. Edward Curtis is so synonymous with American Indian identity. It’s our time now as Native artists, as photographers, to reclaim and restructure our narratives in a humanized way.