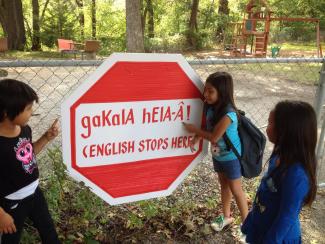 We have reached a pivotal point in the life of our language: for the first time in nearly a century, a new group of children are speaking Yuchi as a mother tongue. Our Yuchi people are the keepers of a unique language, identified as a language isolate by linguists. This means that Yuchi is unrelated to any other language and is one of the world’s most ancient and richest languages, carrying eons of cultural knowledge, history, and a different perspective on the world. For over a hundred years, under immense oppression, our Yuchi people have been counting down the number of Yuchi speakers with fewer speakers each year. The decline of the language has been from about 24 native speakers 20 years ago, to 6 speakers 5 years ago, to now only 1 fully fluent elder speaker. But for the first time in this long history of overcoming oppression, including the so-called Trail of Tears, government boarding schools, and English-only legislation, we are finally counting forward and adding first language speakers to the list.

The founder and director of the Yuchi Language Project, Richard A. Grounds, Ph.D. (Yuchi), realized years ago that the elders’ heartfelt dedication alone would not be enough to save the language; the community needed an intentional methodology and a language habitat to create new speakers that could fully embody the language of our elders. Sustained immersion with children at the Yuchi House has allowed for the successful breath-to-breath transmission of the language.

yUdjEha nÔtsOlAhA yUdjEhalA yalAnÔk’âya: At the Yuchi House we turn back toward the Yuchi way
gOlaha (Grandmother) Maxine was raised speaking Yuchi by her grandmother, and she is the last fully fluent speaker of her generation. As the matriarch of the Yuchi language, gOlaha
Maxine is an inspiring and amazing woman. We call her gOlaha because she is like a grandmother to all of the children in the Yuchi Language Project. At 93, she is very active and dedicated to sharing her wisdom, even driving herself to language classes at the Yuchi House. She often says that she believes gOh@nTOnA (God) has given her long life so that she can fulfill her purpose of sharing her Yuchi stories, songs, and language with the children.

The Yuchi House in Sapulpa, Oklahoma has become a home for the language where Yuchi people ages three months to 93 years come together every day to live in the language and embrace yUdjEhalA, the Yuchi way. Without a steady funding base, the 501(c)(3) nonprofit program relies on grants and donations to keep its doors open. Despite proven methodology
and community engagement, the Yuchi House can only create new speakers with operational funds. Children are the quickest learners, but also the quickest forgetters, so a lapse in funding could jeopardize the promising progress being made.

We started a Master-Apprentice program in 2002 that enabled the fluent elders to directly engage younger second language speakers in immersion for two to three hours a day. In my early teens, I was among the first group of Yuchi apprentice learners gifted with the opportunity to visit fluent elders in structured home visits, and it was through this process that I saw exponential growth in my own language development. Master-Apprentice was a natural process of learning in which we lived in the language with elders doing tasks together like cooking, sewing, and cleaning. That experience helped to prepare me for the current journey of raising my own children solely in the Yuchi language.

As the number of fluent elders dwindled, we modified the Master-Apprentice approach to a small group of learners with one elder. We realized that the most valuable cultural asset is the elders’ time. Through this process, the program has developed over 16 new second language speakers who are competent to teach the language. These young people are now the instructional staff for the ongoing immersion programs that work with babies, preschoolers, and school-aged youth on a daily basis. This cohort of young people are effectively the bridge between the fluent elders and the new generation of first language speakers. The key is that many of the second language speakers are also young parents who use the language
at home with their own children. 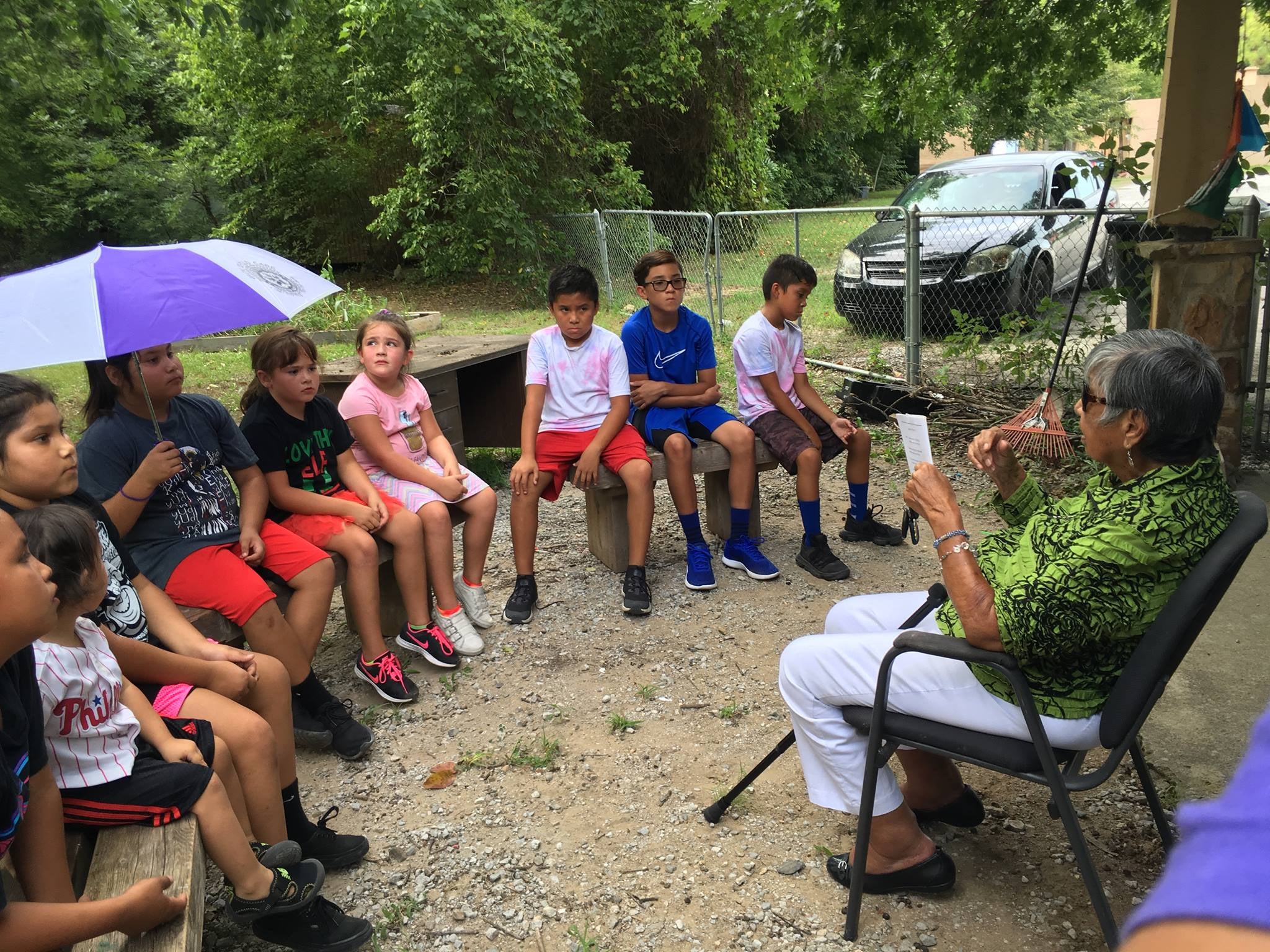 nÔk’@k’ada nÔk’â’wAdA: The language lives in community
After years invested in adult learners, we eventually realized we needed to start with younger and younger children in order to achieve our goal of creating new native speakers of Yuchi. To develop first language speakers we like to begin immersing babies while they are preverbal, before their worldview is formed by English. The gOnE (baby) class was started in July 2018, in which up to 10 toddlers are paired with an energetic group of young adult second language speakers for a half-day immersion program. The instructional staff are all language learners of varying levels. One of our significant strategies for success has been using the learners as teachers so that they learn rapidly and can directly apply what they are learning in real time.

We do not see the gOnE class as an end in itself, but as a support for families who are speaking Yuchi at home. The progress of the babies and toddlers has been an exciting journey. We were first encouraged when they showed signs of comprehending Yuchi very early—they could use baby sign language, point to body parts, and perform actions when prompted. Then came the joy of hearing their first words in Yuchi, like @w@^ (“take it off”) and KAdaTA (“that’s enough”). Now most of them are beginning to play and communicate their thoughts and desires through Yuchi, and even reprimand each other, saying, hôn@ n@chup’@dû! (“no, don’t be rowdy!”). The language is truly alive when the youngest learners come together. At this early age, they are learning how to be in the world through the Yuchi cultural lens. They will be the bearers of our ceremonial language, which they can someday pass on to their own children as a mother tongue.

yUdjEhalA KAlA nÔk’Âgû: Bringing the language home
My own children are part of the toddler immersion class at the Yuchi House. Before they were born, I made the radical commitment to speak only the Yuchi language to them. Even in the womb, I began speaking to them in Yuchi because I wanted them to be Yuchi first. I know they will become many things in their lifetimes, including eloquent English speakers, but the Yuchi worldview will be what enables them to stand strong wherever they go in the world. I knew my son Chaské ashtalA was internalizing the Yuchi language when he began speaking Yuchi in his sleep—he was dreaming in Yuchi.

The language was in his subconscious and at every level of his being. Now that he is almost three years old, he can articulate those dreams to me in Yuchi. He tells me, badOlA k’ala dOw@^ jî (“last night I had a dream…”). I’m amazed by how much he knows intuitively in the language that has not been “taught” to him. That’s the beauty of immersion and getting the language to young children while their brains are ripe for language development. As Indigenous people, it’s important for our family language to be decolonized and set apart from the colonial worldview of English.

We maintain a butterfly garden and feel especially connected to the monarch butterflies because in some ways their annual migration pattern, which is critical to their survival, mirrors our journey to restore the endangered Yuchi language. To kick off 2019, the United Nations International Year of Indigenous Languages, ten of us from the Yuchi House drove 1,200 miles south to see the butterflies in their winter home near Mexico City. It was a spiritual journey to see the millions of monarchs at their nesting grounds after they had traversed 3,000 miles over four generations. During their migration, the younger generations are flying to a homeland they have never seen but they believe exists because of the legacy of their ancestors. Similarly, the children in our gOnE classes are the first native Yuchi speakers in four generations. They are rebuilding a Yuchi speaking community that they have never seen, but that our elders once lived. Our ancestors have brought our language this far, and now it is up to us to bring it home.

Students gather around Elder Maxine for story time at the Yuchi House.