Fishing Is Our Life, We Are People of the Ocean 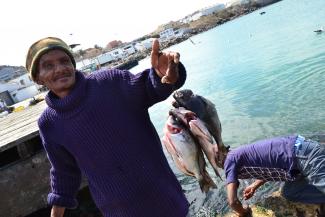 As the Portuguese sailed from Europe to India in the late 1400s and early 1500s, they made frequent stops at the southern tip of Africa. Early skirmishes between the original inhabitants of the area, the Khoi Khoi, and European sailors have been well documented. The most notable of the scuffles was the one in which Antonio de Saldanha was wounded by Khoi Khoi people before quickly boarding his ship again.

Just 120 kilometers north of present-day Cape Town is a bay named a er Antonio de Saldanha—Saldanha Bay. After hearing about the plight of the fisherfolk of Cape Town when they protested at Cape Town’s parliament on November 25, 2016, I visited the communities of Western Cape to evaluate the impact that Cultural Survival’s Indigenous Rights Radio programs about fishing rights could have on the local people. An interim relief fishing policy that was supposed to have been only temporary was now in its tenth year, and the fishers’ protest at parliament was to demand a more permanent and equitable solution.

We stopped at Saldanha Bay first, and were informed that other areas were also affected by this policy. Some of these areas include Pater Noster (“our father” in Latin, or “beads” in a Khoi language) and the Langebaan, which is also rich in history from the first inhabitants, the Khoi Khoi and San. Other affected fishing communities on the west coast of South Africa include Lamberts Bay and Duikers Island, along with Jacobs Bay, which offers recreational fishing for holiday makers.

In Saldanha Bay, we were quickly directed to the Department of Agriculture and Fisheries, which put us in touch with some of the small scale fishers. We met with Carmelitha Mostert, a woman with strong roots in Saldanha, who explained that the reason that she is a fisherwoman is because the tradition had been passed on to her from her great grandparents. “It’s all we know. We are not people who have completed school...some level of school, yes, but most of us fish. We fish to live and we live to fish!” Mostert introduced us to many of the fisherfolk in her area, and soon her living room turned into a conference where all of the grievances were shared.

The grievances can be summarized as follows: there are enough fish in the sea, but all of the permits are handed to corporations or large companies with only certain days allocated for small-scale fishers. When fishers go out to sea on a Monday, they can only go out again the following Thursday, more or less once every third day, regardless of weather conditions. Fines imposed on fishers are exorbitant and lessen their chances of survival.

When I was among the people, I could see that they are very aware of the way in which the globalized world works. A great number of them had completed high school and were up to date with current international affairs. The world that they choose to live in, however, is different, and functions differently. They choose to respect the sea and live with it, to co-exist with the ocean and the elements thereof. Their understanding of the ocean is vast, and has been carried on from generation to generation. They speak of the ocean with a love that resembles the love of a person. The ocean indeed takes on living characteristics, and so does everything around it, include the weather, the moonlight, and the sun.

These sentiments were echoed when I went to the Langebaan area, where I met Solene Smith. We first took notice of her in a Daily Maverick photograph, complete with placards and posters, a bullhorn in hand, in front of Cape Town’s parliament. Placards behind her read “NO FISH, NO EAT” and “Fishing for our Dignity.” We were honored to meet Smith at a local community hall, where her other “job” includes cooking daily for underprivileged kids. is superwoman is out at the harbor at 5:00 a.m. and returns around 12:00 noon to cook for kids coming from school. “Fishing is our life; we are people of the ocean,” she says. As the chairperson of Coastal Links in the Langebaan area, Smith is also the spokesperson. We sat down in her kitchen where we interviewed her to the smell of garlic, ginger, and bay leaves while she was chopping onions, the bread dough already kneaded and risen.

“A fair fishing policy is all that we ask for. We have been struggling for years to get it implemented,” she says. A fair fishing policy will basically mean that Smith and the fisherfolk that she represents will be able to go out to the ocean more frequently, thereby enabling them to make a proper living, which will afford them the necessities needed to live a decent life, purchase a decent home, and take their kids on vacation.

We travelled further to Pater Noster where we connected with ordinary fisher folk there. Pater Noster is seen as the crayfish hotspot of the west coast of South Africa, and tourists flock here to get a taste of this delicacy. Yet the plight of the people there is the same. Quotas have been implemented that restrict them to going out on the ocean only on certain days.

Prior to our visit to these communities, Cultural Survival conducted an interview for a radio program with Stephen Schnierer, a freshwater scientist from New South Wales, Australia, who explained to us that the Convention on Biological Diversity contained two articles that could assist Indigenous sherfolk. Article 8(j) states, “Each contracting Party shall, as far as possible and as appropriate: Subject to national legislation, respect, preserve and maintain knowl- edge, innovations and practices of Indigenous and local communities embodying traditional lifestyles relevant for the conservation and sustainable use of biological diversity and promote their wider application with the approval and involvement of the holders of such knowledge, innovations and practices and encourage the equitable sharing of the bene ts arising from the utilization of such knowledge inno- vations and practices. Article 10c states, “Each Contracting Party shall, as far as possible and as appropriate: c) Protect and encourage customary use of biological resources in accordance with traditional cultural practices that are com- patible with conservation or sustainable use requirements.”

With the help of Wes Kus FM, a community radio station that reaches the fisher community of the entire west coast, Cultural Survival was able to have our radio program on Indigenous Peoples’ rights to their traditional fisheries aired. Through the program, local fisherfolk can listen to how Aboriginal Peoples in New South Wales, Australia have utilized the Convention on Biodiversity in similar struggles. Cultural Survival is still in touch with the fisherfolk of the west coast, as well as Coastal Links, the organization that looks after their interests, and we will keep our ear to the ground to keep you updated on their progress.