Fast Track for the Trans-Pacific Partnership: What It Means for Indigenous Peoples 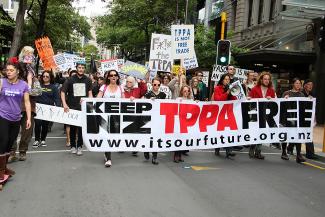 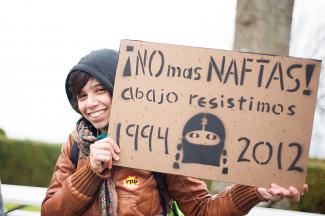 The TPP would elevate multinational corporations and private investors to equal status with sovereign nations, and therefore above individual citizens, empowering these entities to sue nations via private tribunals. The TPP has been marked by an alarming lack of transparency and public input. The public has not been allowed to see the draft text, and the majority of information that is available is the result of leaks. Even members of Congress have been provided only limited access to the proposed agreement. US Senator Elizabeth Warren (D-MA) has called for increased transparency in trade negotiations for the TPP, warning that “without trans- parency, the benefit from robust democratic participation— an open marketplace of ideas—is considerably reduced.” Meanwhile, more than 600 official corporate “trade advisors” have been given special access to the draft text.

In the same vein as deals like the North American Free Trade Agreement and the World Trade Organization, the TPP is being drafted with no input from the Indigenous Peoples who live in countries that will be affected by the deal. The TPP could have broad implications for Indigenous Peoples living in the United States, Australia, Brunei, Canada, Chile, Japan, Malaysia, Mexico, New Zealand, Peru, Singapore, and Vietnam. The secrecy of the TPP entirely disregards the concept of Free, Prior and Informed Consent, a tenet of the UN Declaration on the Rights of Indigenous Peoples which states that policies affecting Indigenous Peoples should not move forward without the full understanding and approval of those it might affect.

The TPP threatens to dramatically affect Indigenous Peoples by ramping up trade policies that have allowed for transna- tional corporations to engage in oil, gas, and mineral extrac- tion without the Free, Prior and Informed Consent of their communities. TPP policies would encourage the natural gas industry, which has already severely impacted Native and First Nations communities in North America. According to the Sierra Club, “The TPP would facilitate increased exports of liquefied natural gas by requiring the US Department of Energy to automatically approve all natural gas exports to TPP countries. Increased exports would mean an increase in hydraulic fracturing, or fracking, the dirty and violent pro- cess that dislodges gas deposits from shale rock formations.’’ Natural gas companies have already begun encroaching on otherwise off-limits Native lands. Native women are particularly victimized, as fracking operations have been correlated with increased sex trafficking, rape, missing women, and influxes of drugs and alcohol into communities, in addi- tion to environmental contamination of local water and air quality. The TPP would also allow companies to evade finan- cial responsibility for environmental contamination, even when it occurs on Indigenous Peoples’ lands. Under the pro- posed agreement, investors could demand taxpayer compen- sation for imposed fines, effectively burdening the public with the cost of environmental cleanup. According to Profes- sor Jane Kelsey of New Zealand, the TPP draft chapter on environmental regulations fails to define its key terms, leaving vagueness that will allow for inconsistent interpretation and implementation of regulations. Nowhere in the chapter does it detail a mechanism for setting penalties for environmental offenders. It also excludes resource management practices and ignores standards set by the UN Declaration on the Rights of Indigenous Peoples.

The TPP’s draft article on Trade and Biodiversity recognizes the rights of states over natural resources and genetic material. This would allow for multinational corporations like Mon- santo and industries like Big Pharma to benefit enormously by allowing them exclusive rights over seeds and traditional plant-based medicines found in biodiverse areas managed by Indigenous communities. The draft flagrantly ignores Article 31 of the Declaration, which states that “Indigenous Peoples have the right to maintain, control, protect and develop... the manifestations of their sciences, technologies and cultures including human and genetic resources, seeds, medicines, knowledge of the properties of fauna and flora.”

The patenting of plants that have been used traditionally by Indigenous Peoples without their consent or benefit sharing has been called bio-piracy, and would conceivably snowball upon the approval of the TPP. Indigenous activist Te Kaituhi, a Māori of Aotearoa New Zealand, exhorts us to “imagine a world where Indigenous knowledge, language, and customs are outright owned by multinational corporations and copy- right enforcement is heavily backed by government police forces.” Kaituhi argues that “the TPP won’t only affect Indigenous freehold land, nor will it just push our people further into poverty. The TPP will give multinationals the right to exploit the ecosystem and further aid them in the acquiring of enforced trademarking and copyrighting of Indigenous intellectual property and cultural or traditional knowledge;” in other words, a new form of colonization.

One of the most troubling aspects of the TPP is found in the draft chapter on investment deals with investor-state dispute settlement, which gives corporations the right to sue a government for unlimited cash compensation in private and non-transparent tribunals over nearly any law or policy that a corporation alleges will reduce its profits. Kelsey notes that “the vast majority of investment arbitrations under similar agreements involve natural resources, especially mining, and have resulted in billions of dollars of damages against governments for measures designed to protect the environment from harm caused by foreign corporations.”

Under the proposed TPP, the investor-state clause can be used to pressure governments into allowing the continued operation of severely polluting industries out of fear of being sued for lost profits. Governments around the world are already reluctant to regulate industries like mining and oil, which can bring large revenues. With the potential for States to be held financially responsible for reigning in harmful business practices, corporate profits will gain an even stronger precedence over disenfranchised Indigenous Peoples living with destructive industries in their backyards.

Fast track, also known as Trade Promotion Authority, is a process that rushes trade deals through Congress and removes the ability of elected officials to ensure that trade pacts protect workers, communities, and the environment. Fast track would allow the president to send already signed trade pacts, including the TPP, to Congress for a straight up-or-down vote with no amendments and a maximum of 20 hours of debate. Despite mounting opposition, the Obama administration is supporting the fast tracking of the TPP.

Cultural Survival has signed on along with over 550 organizations in a letter to former US Senate Finance Chairman Ron Wyden (D-OR), firmly rejecting fast track trade promotion authority in the United States and calling for a new system for negotiating and implementing trade agreements. In the letter, this diverse coalition stated that fast tracking is an out- dated mechanism that would limit Congressional and public oversight over trade negotiations. Communities, workers, and especially Indigenous Peoples must have a say in these deals. Fast track is the clear opposite of the principle of Free, Prior and Informed Consent, the human rights standard in negotiating deals that affect Indigenous Peoples as the TPP will in a dozen countries.

Photo courtesy of Caelie Frampton
Image Two: Activists all over the world are making the connection between the TPP and other disastrous free trade agreements like NAFTA.