Extracted from Colombia: One Woman's Work to Counteract the Destructive Force of Multinational Mining on The Wayúu of La Guajira 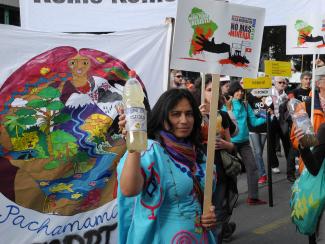 In the fictional world of James Cameron’s Avatar, Pandora’s Indigenous Na’vi people defend their sacred territory against mining encroachment amid overwhelming odds. At stake is their intimate and unique relationship with the land, their way of life, and their ability to decide what kind of future they want for themselves. It is a story that Cultural Survival board member Karmen Ramírez Boscán and her Wayúu people understand well, because they grapple with these realities every day.