Everything Is Connected: Tla-o-qui-aht People and Climate Change 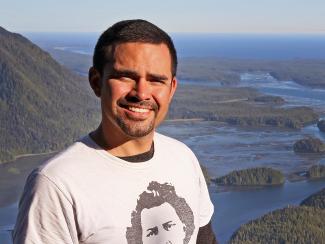 When Canada created the Pacific Rim National Park Reserve in the 1970s, the government did not consult with the Tla-o-qui-aht people and other Nuu-chah-nulth First Nations of Vancouver Island, British Columbia, whose traditional territories it subsumed. Among many other negative consequences for Tla-o-qui-aht, the Park’s establishment erased any future options for their community to grow. But recently a deal was brokered to support an 86 hectare (nearly 1 square km) expansion of the Esowista reservation.

Now, after a few years of construction, a new Tla-o-qui-aht community, Ty-Histanis, is springing to life. Over 170 single family houses, more than 30 duplexes, and a dozen or so elders’ units are planned, along with a school, health clinic, pharmacy, recreation center, and a bus hub. Most of it is yet to come, but the main infrastructure has been built, several houses raised, and some families have already moved in.

The second of two Tla-o-qui-aht reserves, Esowista (and now, Ty-Histanis) is located on the west coast of Vancouver Island, British Columbia on the southern edge of Clayoquot Sound. Ty-Histanis was designed to reduce greenhouse gas emissions through the use of more efficient heating, electrical, and mechanical systems. A central geothermal station makes it possible for each house to have radiant floor heating, an important feature in the region’s wet climate, especially now, when winter precipitation is expected to increase. Each household will also save money because it won’t be necessary to rely on electricity for heat. Most importantly, the expansion will allow people to relocate to safer, higher ground above the Esowista shoreline, which is increasingly being eroded by stronger and more frequent winter storms—the consequence of changing climate.

Eli Enns, the great-grandson of Nah-wah-suhm (a public speaker and historian for Wickaninnish, the Grand Chief of the Tla-o-qui-aht Nation), is a political scientist with expertise in constitutional law and a longtime resident of Clayoquot Sound. Of the new community, he says, “As with everything the Tla-o-qui-aht people do, we have tried to apply our traditional teaching to achieve sustainable community development in Ty-Histanis, paying particular attention to climate change.” As part of a climate change adaptation design to deal with increasingly intense rains, over 40 percent of the land in and around the community has been left undisturbed. Several stormwater retention ponds have been constructed with new pavements made of porous material to allow water to seep through them, into the soil, instead of letting runoff overflow the community storm sewage system.

The Tla-o-qui-aht people and their long-term partner, Vancouver-based Ecotrust Canada, also looked for ways to reduce the amount of fossil fuel used in construction and transportation of building materials. They have designed and built a model house incorporating Nuu-chah-nulth traditional long-house designs and local building materials as part of the “Standing Tree to Standing Home” program. Their hope is that this more energy-efficient traditional house model will become a preferred option for the new families moving to Ty-histanis from Esowista or Opitsaht, or even families returning to their traditional territory from other parts of British Columbia or the rest of Canada. “We have a constitutionally recognized Aboriginal right to be self-governing. And a part of our tradition of self-governance is to look after our traditional territory for the benefit of future ancestors. Now we have to find thoughtful, creative, and innovative ways of reapplying those traditional concepts and values in a modern context of natural resource management,” Enns says.

Enns was profoundly affected by regular childhood visits to his father’s homeland, Clayoquot Sound, and seeing his great-grandfather’s house gave him an overwhelming sense of belonging and connectedness to the landscape, something that has guided his life and work ever since. “Several things came out of that experience for me,” he says. “The first thing was, ‘live under the heavens and upon the earth.’ And what that meant to me was to be aware of the sun and the moon cycles that govern our lives every day and every year, and act appropriately: simple.”

With the establishment of Meares Island Tribal Park in 1984, Tla-o-qui-aht people began to manage their lands according to their traditional values. The Tla-o-qui-aht elders, however, were never satisfied focusing solely on Meares Island without bearing in mind their entire traditional territory, because of their understanding of Hishuk Ish Tsa’walk—everything is one, everything is connected. “You can’t disconnect the Island from mudflats, and inlets, and rivers, and salmon,” says Enns. “So we always knew that we would need to go back to managing our whole traditional territory. [After] Meares Island, we focused on Ha’uukmin, the Kennedy Lake watershed, which became our first attempt to figure out Tribal Parks management based on our traditional principles.”

The resulting Ha’uukmin Tribal Park management and land use plan informs proponents of development projects about what kind of activities are allowed in the Park before the developers approach Tla-o-qui-aht traditional territory. Following traditional practices and laws of their people, the areas least disrupted by logging and other development activities were set aside as traditional qwa siin hap, or “leave as is,” areas, similar to what scientists would call a conservation or protected area. Other parts of the Tribal Park that had been logged or affected in some other way, like the Kennedy Flats, are called uuya thluk nish, or “we take care of.” This is where certain types of economic development and ecosystem healing take place, like salmon habitat restoration.

“Then the goldmine proposal came,” Enns recalls. “So we said, ‘No, you can’t do that’, and created the Tranquil Creek Tribal Park and the Esowista Tribal Park to protect our territory from mining. Now we have pretty much the entire traditional territory covered. But our salmon go out into the open ocean. Our responsibilities follow salmon, because what happens in international waters is going to affect what happens here. That is where we’re trying to get Indigenous voices into discussions about international waters and the management of the Pacific Ocean.”

Climate change presents a particular challenge because the environmental conditions that had enabled the temperate rainforests to mature for millennia are simply no longer there. There is also not enough salmon to bring the necessary nutrients into the system to sustain the growth of ancient trees. Moreover, the increasing air and water temperatures undermine the future of those wild salmon species, like sockeye, that depend on cold water to successfully reproduce and grow.

In partnership with groups like the Wilderness Committee, Ecotrust Canada, and Parks Canada, the Tribal Parks have chosen a path toward developing a conservation economy that is meant to support the natural and social systems making up Clayoquot Sound and serve as a foundation for ensuring the Tla-o-qui-ahts’ well-being. Though some traditional subsistence practices like whaling are no longer viable, the Tla-o-qui-aht are hoping to strengthen local traditional subsistence, trade, and exchange models with newer elements of conservation economy. “The most fundamental thing is water,” Enns says. “We need clean drinking water sources for ourselves and for the future generations, and it is one of the key resources that we have in our traditional territory in abundance. So, we intend to keep it that way. What we are doing in our climate change adaptation work now is basically preparing for the big crash. If the crash never happens, that’s fine. Because these are still things that need to be done. So we may be just creating a better way of doing things in the long run.”

This article is adapted from a six-part series, “Everything is Connected: Tla-o-qui-aht People and Climate Change.” Follow Gleb Raygorodetsky on Twitter @ArchipelagoHope and Tla-o-qui-aht Park on www.facebook.com/tlaoquiaht?