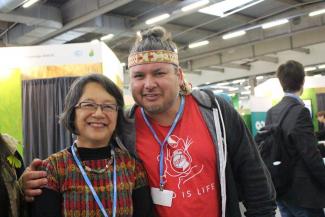 Latin America is taking to the streets to claim their collective rights, tired of years of discrimination and inequality— and Chile is no exception. It is a country where Indigenous Peoples are not recognized in their constitution and whose institutional practice has always been accompanied by State violence and the failure to follow international standards of human rights. This is the time when the world of philanthropy and Indigenous organizations can talk about LGBTQIA+ issues after years of invisibility and denial. It is no longer sustainable, like the global climate, to continue with these bad practices. In Chile, the issue is not addressed except as a “wink” in the prevention of HIV, AIDS, and other sexually transmitted diseases.

Although there is a large amount of sexual diversity in both urban and rural communities, few dare to lead a nonheteronormative life openly due to the double social stigma Double Social Stigma and Discrimination Still Exists Juan Antonio Correa Calfin (Mapuche from Chile) and discrimination that still exists. In traditional families and Mapuche culture, there is a sexual diversity intimately related to spirituality and sexuality, and important roles around traditional medicine. The same is true throughout America, where scholars have catalogued sexual diversity and its relationship with Indigenous religiosity as sacred links. In this type of study, the privacy of the subjects is respected and no further development is given to the recognition of sexual practices.

Throughout the Americas, sexual diversity among Indigenous Peoples is one of the most difficult issues to address. In my work in the world of philanthropy, traveling through different territories, I try to address this topic discreetly as I seek the reality of sexual diversity in local contexts. In Mexico and Guna Yala, for example, there is greater acceptance of diversity as evidenced by the figure of the Muxhe of Oaxaca and that of the Wigunduguid of the Guna people. Yet, while their roles and participation in social life are well defined, discrimination is also part of their lives. In the Andean world, specifically Peru and Bolivia, there is more prejudice towards the LGBTQIA+ population, with young people having to migrate to cities, even living in the streets, and frequently taking to prostitution as the only way to escape from this discrimination.The world of drugs, violence, and death are very present in the life of the brothers and sisters of sexual diversity in the city, and the highest rates of murder and suicide are closely related to this segment of the population.

We have pressed to incorporate the rights of the Indigenous LGBTQIA+ population in the demands of the collective rights of Indigenous Peoples, and highlighted the introduction of sexually transmitted diseases unknown some years ago in the Indigenous territories and which our traditional medicine cannot control. Only last year, with the help of International Funders for Indigenous Peoples and the world of philanthropy, were we able to address this issue at an event parallel to the UN Permanent Forum on Indigenous Issues in New York. Further discrimination happens as representatives do not know the diverse social reality in their communities and others who follow Western religious customs, which is a byproduct of modern colonialism and affects the development of policies for the Indigenous LGBTQIA+ population.

We continue to confront this challenge by supporting local communities. The participation of sexually diverse populations is a required component for obtaining grant funding, as is women’s participation. Other philanthropic institutions have been implementing this standard, which fills us with hope. There is a cultural revival around sexual diversity and rights, but there is still a long way to go for Indigenous societies, organizations, and leaders. It is a necessary recognition for our time, the yearning for justice and recognition to all who have fought for years for respect for diversity and collective rights in all their magnitude. We will continue to favor the processes so that Indigenous LGBTQIA+ communities can claim their collective rights and eradicate violence and discrimination. The demand for justice in capitals of the world must be accompanied by a recognition of the rights of Indigenous Peoples, their cultural, social, and gender diversity, and respect for their traditional lifeways, lands, and resources.