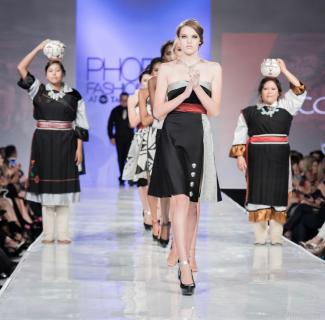 I entered the fashion industry at the age of 30, what the industry considers "later in life.” Prior to that, I was working in visual media from filmmaking to photography. I really don’t consider myself stylish or fashionable, but I do have an eye for it. My first introduction to the fashion world began at the tender age of two when I would watch my grandmother, Hazel, develop her own textiles using sheep wool and natural dyes to create intricately woven Navajo rugs. I assisted her by hand carding the wool so that it could be spun into yarn. Her step-by-step process allowed me to develop a better understanding of color, texture, and form. Sadly, my time with her was short lived, as she lost her battle with cancer a year later.

Throughout my childhood, I continued to have an interest in fashion but I never acted on it, mostly because I naively equated fashion with femininity—so I avoided it all together to protect myself from being “outed” as gay and as Two-Spirit. Whenever my friends or cousins would play with their dolls, I could only observe from afar, wishing I was them. Instead, I immersed myself in the imaginative world of books. Living on a farm, isolated from the world, there wasn’t much for me to do except to use my imagination by running around in capes with a wooden stick, pretending to be a sorcerer. 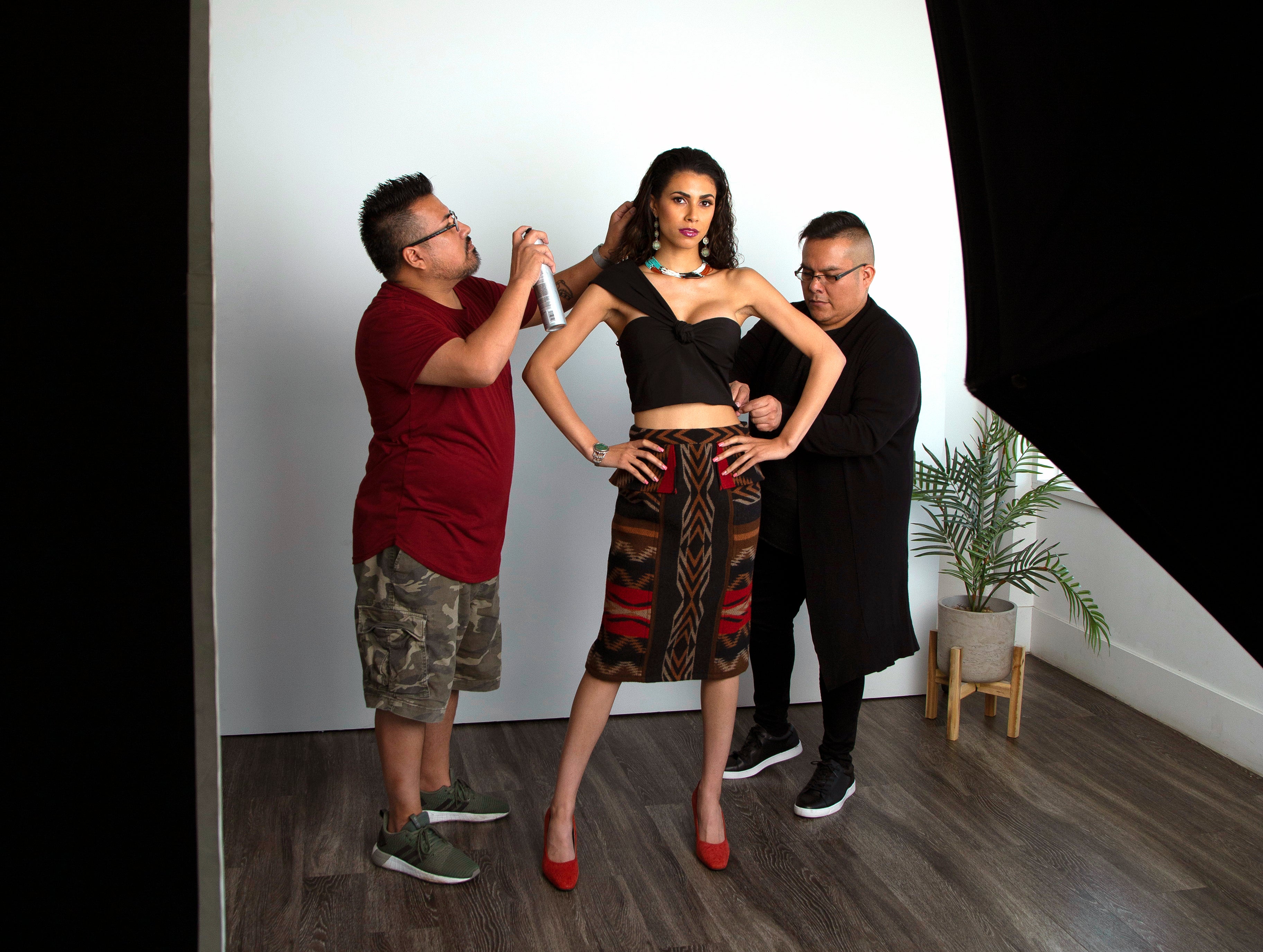 Years later, in the summer of 1995, the costume designs in the hit comedy, “Clueless,” invigorated my love for fashion even more. The seed was planted, but still I continued to ignore it. The film would further inspire my love of filmmaking, which prompted me to get my first bachelor’s degree in film studies, with minors in music and theatre, from the University of New Mexico. The highlight of my studies was producing my own documentary, “Trapped In Images,” a student short that explores the misrepresentation of Native Americans in pop culture from Hollywood movies to Indian-themed mascots.

After graduation, I moved to Flagstaff, Arizona to work briefly as a Sears Portrait team member before enrolling at Northern Arizona University to study photography. As a newly out queer student, I became enamored with fashion magazines. I told myself repeatedly that one day my images would end up in the pages of Vogue, Elle, or GQ. To the amusement of my friends, when perusing fashion magazines, I could name drop high end designers easily without having to take a second look. My photography degree landed me my first dream job as a studio managing photographer for Kim Jew Portraits in Albuquerque, New Mexico. After two years, I moved on from that position and returned to Flagstaff to be with family and to help raise my nieces and nephew. 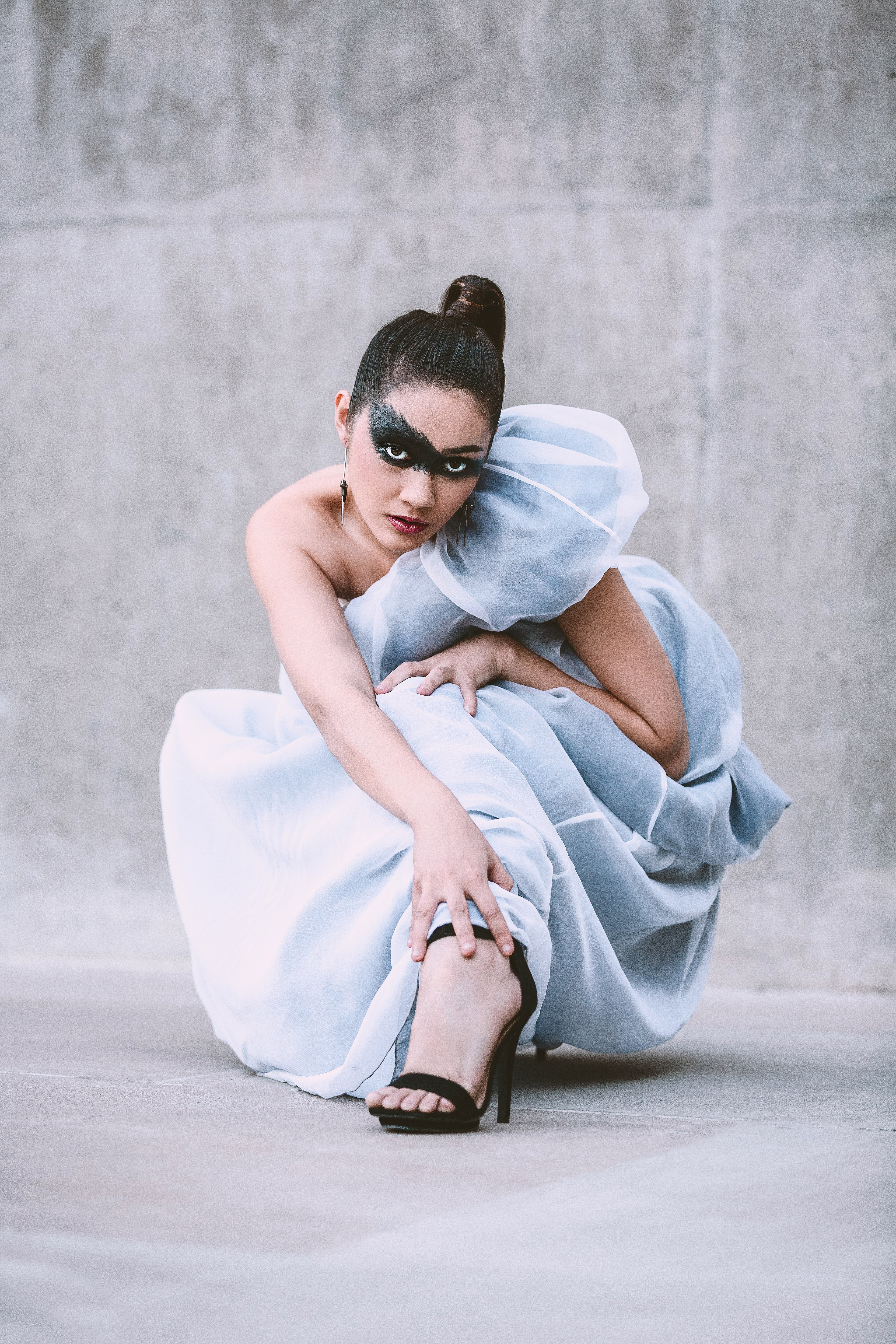 In 2012, while working as a freelance photographer, I answered a Craigslist ad from a local emerging designer seeking interns to assist with her participation in Phoenix Fashion Week’s three-month designer bootcamp. With little experience, I jumped right in. I purchased my first iPhone, downloaded the necessary social media apps, and became a self-taught content creator. The needs of the internship certainly aligned with my visual communication skills. Three years later, I joined the Phoenix Fashion Week team as an event planning intern to assist with their year round fashion events, including its four-day fashion week, which takes place every October. Within months I rose through the ranks, beginning as Social Media and Branding Manager to becoming Director of Multimedia during my six years with the company.

In my first year with the company, I vividly remember an epiphany I had during the first night of Phoenix Fashion Week, which takes place at Talking Stick Resort, a Tribal casino owned by the Salt River Pima-Maricopa Indian community in Scottsdale, Arizona. That first day, after taking in the glamour and spectacle of the show, I took a step back and realized that I was the only Indigenous person around. I explored the entire resort searching for people who looked like me, but aside from a few custodians, servers, and housekeepers, Native visibility in the resort was far and few between. After all, the casino caters to a non-Native clientele from the bordering metropolitan area of Phoenix. 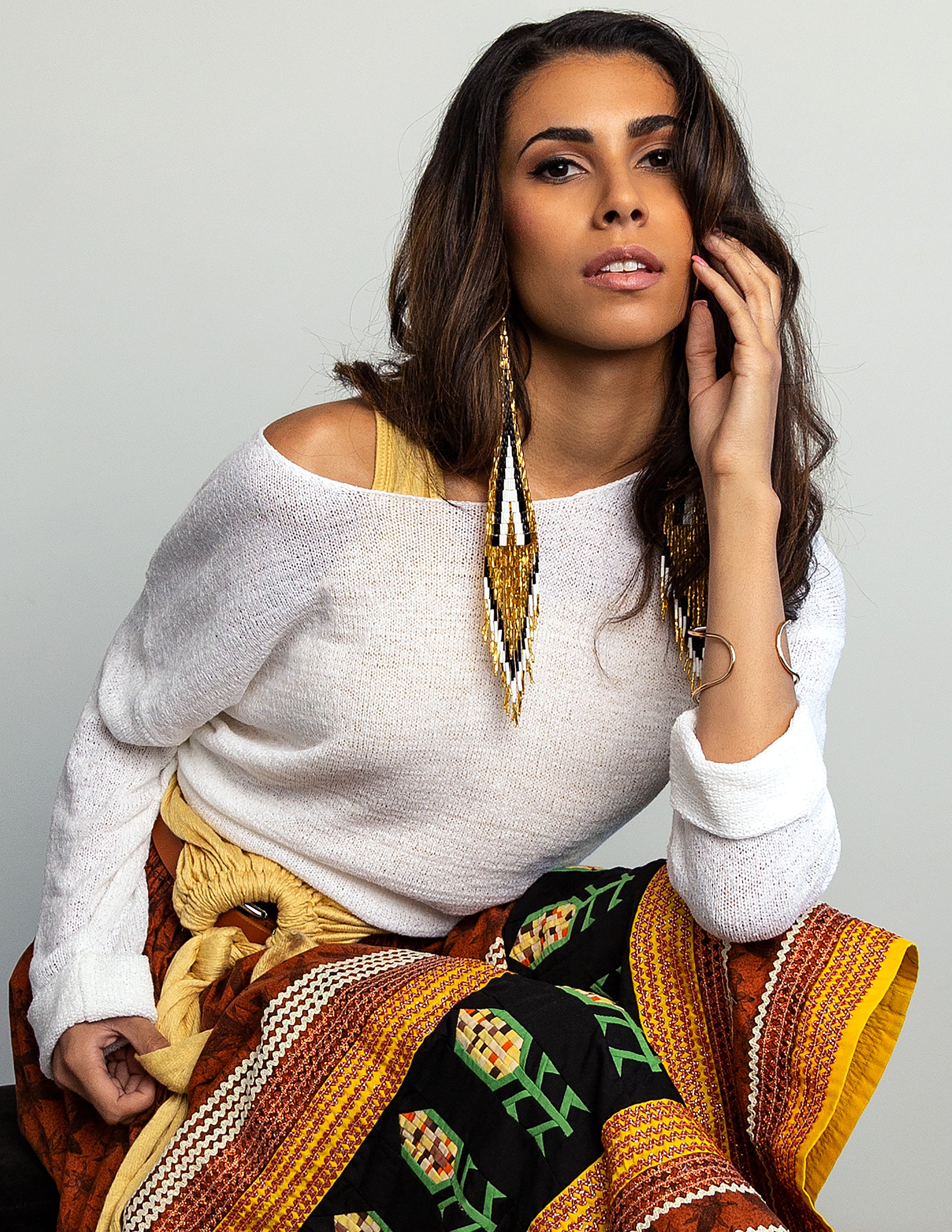 It wasn’t until I was heading up to my hotel room that I stumbled upon a small room located next to the elevators called “Cultural Display.” In this space, I saw several Nativemade artifacts encapsulated within display cases or mounted on the wall. I remember thinking to myself, “Oh, there we are! We are the remnants of the past collecting dust. We are the taxidermies on the wall.” This corner nook served as a reminder that in America, Indigenous Peoples are out of sight, out of mind. Up to this point in my life, I had gotten used to the idea that I was always going to be the only Native person present in white spaces, be it a classroom, a concert performance, a theater production, and now, a fashion show.

Fed up, I knew instantly I had to be the changemaker. So, in preparation for the next season, I assisted in the search for local Indigenous designers. This led to the recruitment of two brands: ACONAV, a fashion label owned by Phoenix designer Loren Aragon (Acoma Pueblo), and Marisa Mike (Diné), a designer from Tonalea, Arizona. Being able to mentor these designers and to see their designs on the runway of Phoenix Fashion Week—and more importantly, for us to collectively and rightfully Indigenize the fashion space that was already taking place on Native land—was one of the many highlights of my career. A year later, Loren Aragon took home the coveted title of Couture Designer of the Year 2017, a first in Phoenix Fashion Week history. 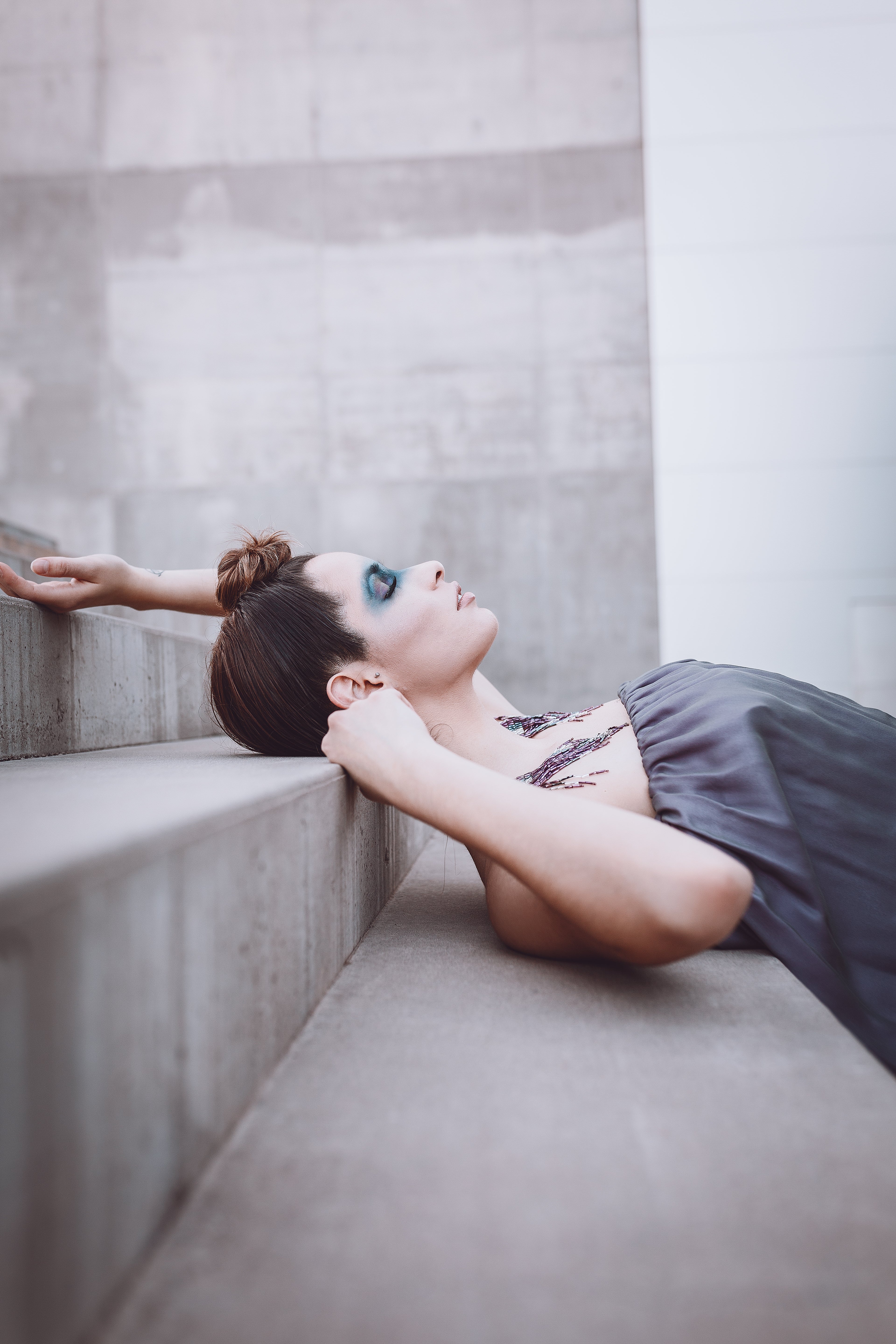 Over the years, we recruited more Native designers to take part in our bootcamps, including Orlando Dugi (Diné), Alicia Vasquez (Yaqui/Apache) of Dotlizhi, Sage Mountainflower (Ohkay Owingeh/Taos/Diné), and Calandra R. Etsitty (Diné) of Winston Paul. My work with these designers inspired me to get a master’s degree in fashion journalism from the Academy of Art University’s online program, because I noticed a void in the industry when it came to talking about the emerging field of Indigenous fashion. According to a 2018 News Leaders Association survey, Native American journalists make up less than one percent of newsroom employment in the United States. For fashion journalists, it’s even less. Prior to studying fashion journalism, I was aware of only two working Indigenous journalists who wrote about fashion: Kelly Holmes (Cheyenne River Lakota), who created the first Native American fashion magazine in 2012 called Native Max, and Christian Allaire (Ojibwe), a contributing writer for Vogue.

Not surprisingly, like most educational institutions in the U.S., the curriculum at the Academy of Art University is mostly Eurocentric and focuses predominantly on the Western fashion system. This worked in my favor, though, because as the only Indigenous student, it allowed me to not only bring awareness to Native fashion but make it the focus of my thesis project, which was to produce my own magazine from cover to cover. With the backing of my advisors, plus taking additional courses in fashion styling, magazine publishing, and art direction, Indigene magazine was born. The magazine celebrates and highlights the ever changing tapestry of Indigenous fashion by sharing and presenting Native stories and cultures authentically through forward thinking perspectives and unique storytelling. 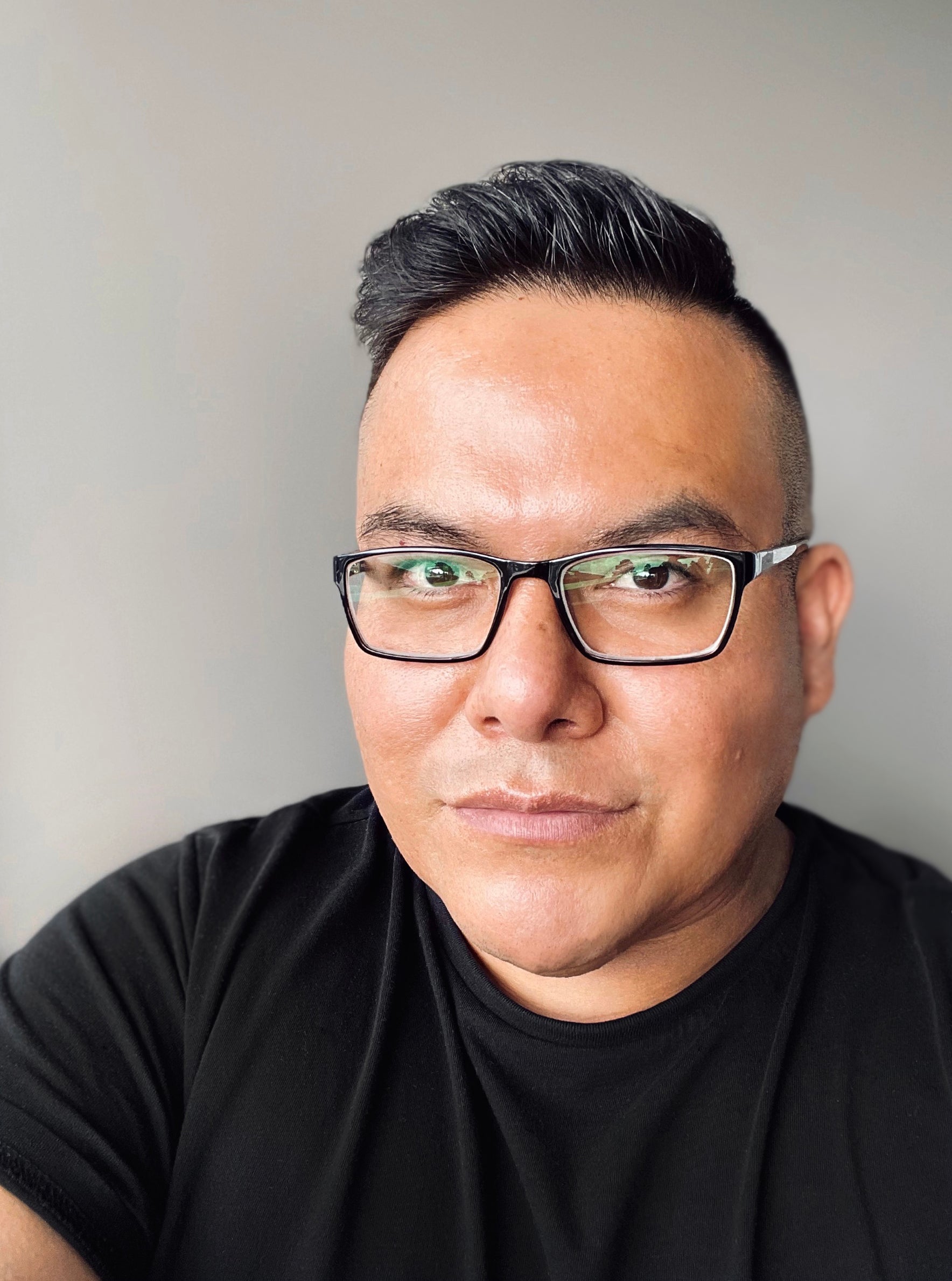 Throughout my various careers, I have always put my Indigeneity at the forefront of my work. Sometimes it’s easier said than done, especially when it comes to Native fashion—not everyone gets it. For the mainstream audience, modern Indigenous designs are not fashion forward enough, and for the Native audience, the designs are no longer Indigenous due to the contemporary elements. The beauty of Native fashion is that it is rich and complex. Unlike Western fashion, there isn’t a Native-authored book readily available for me to study how my tribe used to dress throughout history, let alone the unique clothing of the other 573 Indigenous nations living in the United States, and the countless others existing outside of the Americas.

Furthermore, when it comes to our regalia, this type of clothing is not for public view, or to be used to make a fashion statement. Traditional clothing is worn primarily for spiritual purposes, which the outside world likes to appropriate and fetishize. But, it is not my responsibility to make sense of contemporary Native fashion; I can only shed light on it. And even though I haven’t landed in the pages of Vogue just yet (and it’s okay if I never do), I will continue to Indigenize the industry one story, one photoshoot, one runway, at a time.

— Niya DeGroat (Diné) is a fashion journalist and multidisciplinary creative committed to elevating the discussion around the emerging field of Indigenous fashion and storytelling in the Americas and beyond. He is a citizen of the Diné Nation from Mariano Lake, New Mexico.