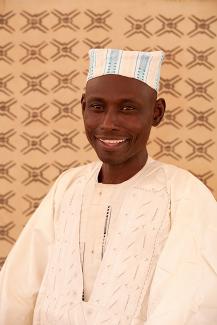 From a young age, Ousmane Macina was fascinated by the jewelry making process, observing his father melt, twist, and hammer pieces in his workshop. While he says he was initially more of a nuisance than helpful, he gradually honed the necessary skills for the trade. By the age of 18 he started working independently on his own pieces, and by 22 he had learned most, if not all, of the skills that had been passed down from one metal worker to another.

For 10 generations, Macina’s family has created and sold a wide range of jewelry in Mali, West Africa. They utilize gold, silver, and brass to create necklaces and earrings that incorporate symbols of the Fulani Empire into their work. Originally a nomadic group, the Fulani partially settled in the Sudan, flourishing during the 19th Century and leaving behind a rich tradition of metal working.

In order to create a piece, a Fulani toned (anvil) and fulah (hammer) are used to twist the metal. These twists make it appear as if many small wires had been intricately melded together to create the final product. Traditionally the jewelry is used in formal occasions such as marriage ceremonies, births, and during Ramadan. For instance, Fulani earrings have historically been used as a visible indicator of the prestige and wealth of their owner, a substitute for having to carry paper money. Now, these and other earrings are worn for both casual and formal events.

Due to political instability stemming from outside occupation, Mali has seen a decrease in tourism within the region—forcing artisans to look for outside markets. Macina is one of a limited number of artisans from the area able to sell his work outside of West Africa. In the mid-2000s he began travelling to the United States to sell his jewelry, also taking along pieces crafted by other artisans unable to travel with him. While in the United States, he goes to arts festivals including the Santa Fe International Art Folk Festival in Santa Fe, New Mexico, and the Cultural Survival Bazaars in Massachusetts.

Macina uses some of the funds raised from sales at these art festivals to teach the trade to local men and women at an artist center in Bamako, West Africa. Not only does this promote the continuation of the craft, but it also opens up a traditionally restricted trade to women, allowing them a new possible source of income. Macina’s work builds on the cultural fluorescence of the Fulani Empire in craft, design, and trade, while working to make it contemporary. He simultaneously promotes the skill of metalsmithing as a viable source of economic income for West Africa while perpetuating the cultural diversity that is represented in the work of so many other West African artists.

Utilizing the symbols of the great Fulani empire in Mali, Macina creates graceful designs of twisted gold and silver wire filigree and granulation.