Conversations with the Earth 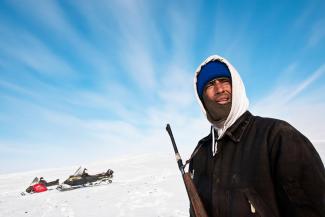 Conversations with the Earth (CWE), a multimedia exhibit at the Smithsonian’s National Museum of the American Indian (NMAI) in Washington, D.C. that ran from July 2011 through January 2, 2012, incorporated photography and film, music, interactive displays, and multiple languages offering Native perspectives on science and global climate change. Viewpoints from 15 Indigenous communities in 13 countries on topics dealing with the environmental impacts of pollution, forced migrations, negative consequences on local livelihoods, and viable solutions to the challenges of climate change were highlighted. The exhibits were designed to invite viewers to arrive at their own solutions and interpretations. Elaborately detailed through wall text, audio tapes, and lectures by artists and curators, the exhibits showcased communities and sponsoring organizations involved with the project. An ongoing, interactive website that allows people to increase their understanding of these issues is still accessible.

There are hundreds, perhaps thousands of Indigenous groups around the world, so it was pertinent that viewers knew which communities, tribes, and peoples were involved. The communities highlighted in the NMAI venue included the Kichwa from Mojandita Village, Ecuador, the Manus from Manus Province, Papua New Guinea, the Gamo from the Gamo Highlands of Ethiopia, the Zanskari from Ladakh, India, the Yaqui and Comcaac from Sonora, Mexico, the Kuna from Ustupa Island, Kuna Yala, Panama, the Quechua and Aymara from several locations in the Peruvian Andes, the Gwich’in who live in northeastern Alaska and the northern Yukon and Northwest Territories in Canada, Maasai herdsmen from east Africa, several Guarani groups located in Cerco Grande, Brazil, the Morro de Mina Reserve in Brazil, the Quara Quara Island in Brazil, and Near Antonina, Brazil.
Similarities in land terrain and agricultural needs precipitated the collaboration between the Gamo of Ethiopia and the Quechua of Peru, two Indigenous populations living in highland regions on opposite sides of the Atlantic. The goal of both groups was to work toward saving their staple crops from the damaging effects of climate change such as hotter temperatures and disrupted rain cycles. Communities with different cultures and crops are still working together and sharing knowledge on maintaining Indigenous agriculture and agrobiodiversity.
During September 2009, Shagre Shano Shale, a Doko village elder, traveled with Ethiopian scientists to Peru to observe how several Quechua communities were preserving varieties of potatoes. The Quechua gardening experiments were relevant to the Ethiopians’ efforts to preserve their staple food called enset in the national language, Amharic, and outsa in the Gamo language. According to people in the Gamo Highlands, famine and severe drought have been nonexistent in low-lying regions because of this drought resistant native plant.
A Photographic Perspective
From an aesthetic standpoint, the photographs of Nicolas Villaume gave a visual reference to the wall text and audio tapes of the numerous Indigenous Peoples from the Arctic to Brazil. Strong portraits of farmers, fishermen, and traditional healers showed faces of pride, determination, and resilience against backgrounds that ranged from the sublime in beauty to parched earth.
Josefina Lema (Kichwa) of Mojandita Ecuador, attired in a bright, embroidered blouse and belt, white cape, red wrist band, gold-beaded necklace, and dark green skirt stood behind a bare pine tree. The tree’s appearance accentuated a failed pine plantation attempt at mitigating climate change. With a stern countenance she was quoted, “At first everything sounded so beautiful.”
An extreme, cropped close-up of Shagre Shano Shale (Gamo) revealed deep, chocolate-colored skin and piercing dark brown eyes; Shale’s sharp-featured face was lined with creases that accompany age and wisdom. Dressed in a woven white top with thin green and burgundy stripes, Shale’s cropped face emerged from an amorphous gray background. His gaze at the photographer and viewers was direct and challenging. The distinguished elder quoted an Ethiopian proverb, “The ox never gives birth and it never rains in the dry season.” Then, Shale wryly noted the current irony, “We have rains in the dry season and it’s dry in the rainy season.”
Irma Luz Pomo: Contemporary Quechua Artist
The venue also featured examples of contemporary Indigenous art and traditional crafts. Irma Luz Pomo Canchumani (Quechua) from Peru displayed her traditional gourd carvings and also functioned as one of the Indigenous video producers. A NMAI exhibition blog documents Canchumani’s interview which focuses on her decision to carve a gourd about climate change. In the interview with Maja Tillman, who works for InsightShare, a Conversations with the Earth (CWE) partner organization, Canchumani discusses the dreams she carved into her gourds, tools wielded to engrave the images, paper ashes used to give the gourd its black color, and the sacred coca leaves she chews to derive the energy needed to work. The scenes depicted include traditional marriage ceremonies, medicinal plants, and the agricultural calendar for sowing and harvesting according to the moon, stars, and other natural phenomena. The carved gourd also depicts people polluting the river, cutting excessive amounts of trees, and developing monoculture farming methods. Irma Luz Pomo Canchumani states, “I hope people take time to see the gourd, the videos, and the photographic exhibition on how climate change is affecting us. I wish that everyone who sees the gourd appreciates the art and follows the content.”
Read more about Farmers without Borders and the Gamo/Quechua exchange.

To learn about current CWE exhibit locations and toget involved with the ongoing research and activism on climate change and Indigenous communities visit: www.conversationsearth.org, www.facebook.com/ConversationsEarth

Read Irma Luz Pomo Canchumani’s interview here.
— Phoebe Farris, Ph.D. (Powhatan-Renape) is the arts editor for the CSQ. She is a professor emerita of Purdue University and the vice president for membership of the Washington D.C. branch of American Association of University Women.